Today at the Guild we’ve got another awesome creative interview lined up. Our guest is Carissa Ann Lynch, author of the Flocksdale Files series. Her latest release, House of the Lost Girls, is out now! 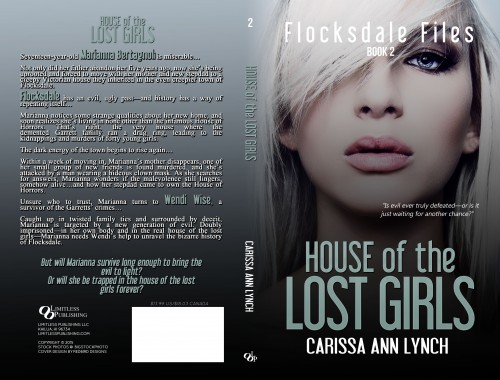 Let’s get to know Carissa…

Hi Carissa! Welcome to Tessera Guild’s latest creative interview. We want to know all about you: DOB, home address, social security #… But seriously, give us the goods on yourself:

Haha! Thank you so much for interviewing me! It’s an honor to be featured on Tessera Guild. So, about me…my birthday is July 18th. I’m (approximately) 30 years old. I live in a tiny town called Floyds Knobs in Indiana with my husband and kiddos. I have a degree in psychology and most of my career background has been in mental health and corrections. It wasn’t until a few years ago that I started writing seriously. I’ve always been obsessed with collecting books and reading, and I enjoyed journaling and writing short stories, but never considered myself a “writer”. One night I couldn’t find a book to read, so I got it stuck in my head that I would just write my own book. From there, it became an obsession and I’ve never stopped! 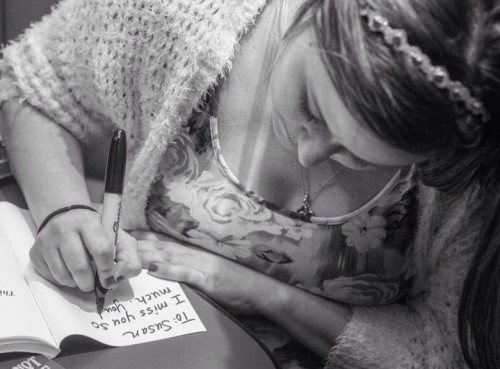 The Sharpie, an essential tool in Carissa’s arsenal.

The Flocksdale Files is about the most f&#cked up town in America, Flocksdale. In book one, Have You Seen This Girl?, readers were introduced to Wendi Wise, a struggling heroin addict hell bent on seeking revenge. At the age of thirteen, she was lured away from a local skating rink and held captive in a place she called the “House of Horrors”. Dumped off on the side of a dirt road, she found herself addicted to the drugs they fed and in fear for her life. So, she runs away from her hometown of Flocksdale, leaving her friends and family behind. After a tumultuous eight years of addiction, rehab, and foster care, she decided it was time for a homecoming party—so she makes a plan to hunt down the monsters of her youth. The monsters she remembers all too well from a tiny, little town called Flocksdale…

In book two, House of the Lost Girls, readers will again find themselves stuck in the horrific, demented town of Flocksdale. Only this time, they’ll get to meet seventeen year old Marianna Bertagnoli. (Although Wendi will make some appearances in Book Two). Marianna is miserable. Not only did her father abandon her five years ago, but she’s being uprooted and forced to move with her mom and stepdad to a creepy old house in a lame town called Flocksdale. It doesn’t take long for her figure out that her new house is none other than the infamous “House of Horrors”—the very house where a demented family kidnapped and murdered young girls several years before. History has a way of repeating itself, and within a week of moving in, one of her small group of new friends is found murdered, her mom disappears, and she’s attacked by a man wearing a hideous clown mask. Targeted by a new generation of evil, Marianna needs Wendi’s help to unravel the bizarre history of Flocksdale.

When did you know you wanted to write this series? What inspired you?

I never intended for Have You Seen This Girl? to be a series, but after I signed my contract with Limitless and sat down to start something new, I couldn’t stop writing about Flocksdale. I started writing it two years ago. It was originally titled “The End”, after the song “The End” by The Doors. That song plays a significant role in the story itself and it also served as inspiration for this book. There are so many things that inspired me to write this book. First of all, Indiana has recently received nationwide attention for our heroin and HIV epidemic. Addiction is an issue that is important to me, personally and professionally. I’m also interested in women’s issues that I address in the book—sex trafficking, sexual violence, post-traumatic stress, addiction, self-esteem, etc. I felt very connected to Wendi and she took the reins on this story. Although the first story has a clear, distinct ending, I felt like there was so much more to say and do…and that’s when Marianna came along. By the way, there is also going to be a third book. It’s called Carnival of Dead Girls. 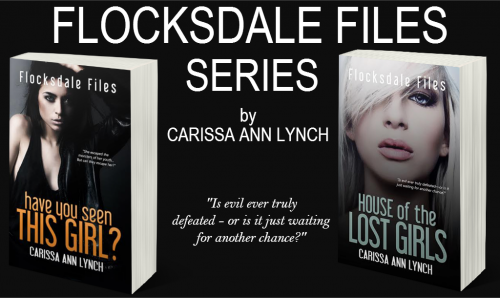 Your cover art is amazing. As in; everyone wants to date the Flocksdale Files girls. Tell us about your cover artist:

Oh, I know. You’ve been stalking my girls on Twitter for a while now hahaha! I have a girl-crush on them myself. I would LOVE to tell you about my cover artist! Her name is Ashley Byland and she’s a designer for Redbird Designs. She does a lot of the cover art at Limitless Publishing, and she is just amazing! I’m so grateful to her for making me such gorgeous covers and bringing my characters to life. Here is her website: www.redbird-designs.net. I recently tracked her down on Facebook and asked her to make me some bookmarks, promo pics, and an author logo. She’s nice as can be, and she can do it all!

It’s a tough world for writers these days. The competition is pretty much everyone in the world. What do you find most challenging? And what are some things that inspire you to continue to write and market your work?

For me, the hard part isn’t writing. The hard part is what comes after—trying to match my work to a certain genre or meet word count expectations, etc. And then of course there’s the marketing side of things. I’m incredibly shy in real life and gloating about my own books makes me extremely uncomfortable. Luckily, I’ve made so many awesome friends this past year—other writers who know what it’s like—and seeing them do it helps me feel a little bit more comfortable. As far as staying motivated…as long as I get to hold that book in my hand when I’m finished, and there are a couple people who want to read it, I’ll keep writing. I just want people to read it, so if I market all day long and only gain one reader, I see that as a success.

Let’s say someone wanted to immediately jump into reading the Flocksdale Files series. Where should they go?

Both books, Have You Seen This Girl? and House of the Lost Girls, are available on Amazon, Barnes and Noble, Books a Million, and select stores.

Thank you so much for interviewing me!

Carissa is all over the web! Find out more about her and get links to her books at:

Special thanks to Carissa (and all our other guests) for being a part of the Tessera Guild Creative Interview series. Look for more interviews to come!