Forgive my indulgence in the trip for one more week. I write these blogs for myself as much as anyone else so as to not forget some of the little things. Memory has a way of distorting or disappearing when we least expect it to.

For our purposes, the digital screen is a good enough stand-in for paper in the 21st century.

Day 0 (Seattle) – My wife is a morning person while I am the exact opposite of her. So she awoke bright and early on our first morning in Seattle and decided to go on a little walk, maybe get to see that quite part of the city when very few people are milling around. Like almost every other morning person I know, she also thought that this would be a good time to get that first cup of coffee out in the city known for that very beverage. So she walked down one street for a couple of blocks… no Starbucks. Turned down another street… no Starbucks. Then another one, with the same amount of luck.

When she later replayed the story for me I could only think that she’d fallen into the Twilight Zone or some weird Bermuda-Seattle Triangle where no coffee can be served lest some horrible fate might befall the city.

“To the lover of wilderness, Alaska is one of the most wonderful countries in the world.” – John Muir 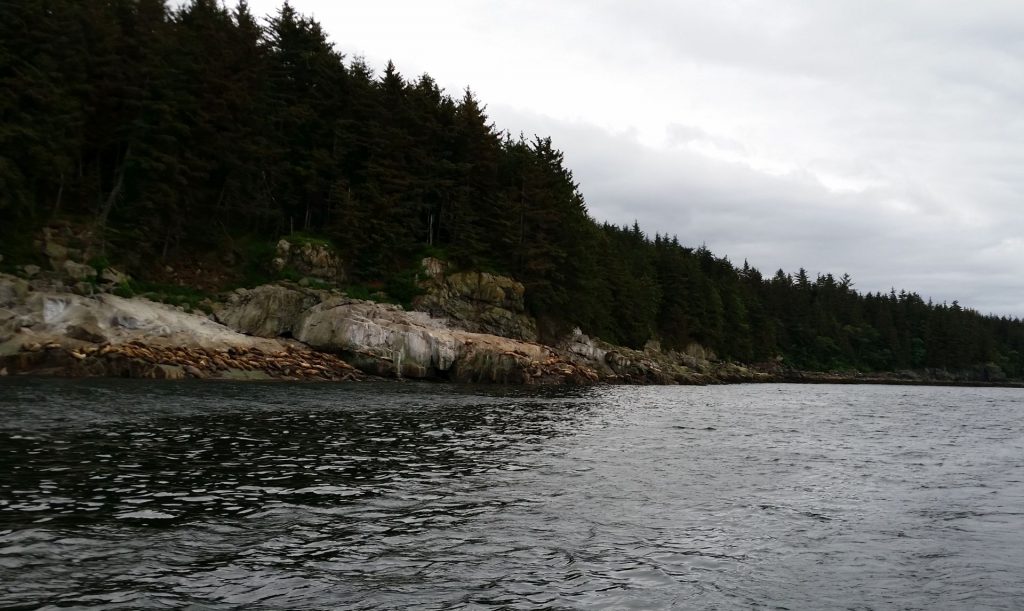 Day 3 (Juneau) – When we arrived at our first “stop” on the tour boat, we were treated to a baby humpback testing its limits – slapping its tail again and again against the surface of the water. The whole time the mom was close enough if she was needed, but mostly seemed content to let him “do his thing”.

The whales weren’t the only things we saw though. There is a whole sea lion area nearby, and the captain took us out to see those guys. For some reason it never occurred to me why they might have gotten the name sea “lion”. When we approached the little island, it was readily apparent. They growl.

Day All of them (At Sea) – Mostly due to wanting to avoid any craziness with motion sickness, we were in a middle room, no windows, not too much around us, etc. But I think no matter what, there is only so long you can stay in your room when you aren’t asleep, so you have to find your spots on the ship. Those quiet places where you can watch the ocean and land drift by you while you relax a little bit (it is a vacation after all). Courtney ended up discovering the quiet spot at the bow of the ship in the lounge area. Plenty of chairs, plenty of windows, and aside from the dance classes or the later night activities, it mostly stayed silent.

Day 4 (Skagway) – One of the things I mentally tried to think of when we went on this trip was what animals might we encounter. However, the two goats in Canada were not even a blip on my list. As our bus pulled into Caribou Crossing for lunch and to see the sled dogs, I saw that just up on the hill behind the “town” was two white specks. Pulling out my binoculars, I was surprised to see two mountain goats hanging out on the side of the mountain. Quickly snapping a couple of pictures, I pointed them out to Courtney.

Fast forward to an hour or so later as we are leaving the area. I take a second to glance back to see if they’re still up there. Sure enough they are. Not only that, they haven’t moved from their spots.

Yeah, they were fakes. Not sure why they needed to get my hopes up (not huge hopes, these are goats we’re talking about here), but they definitely “got me”. 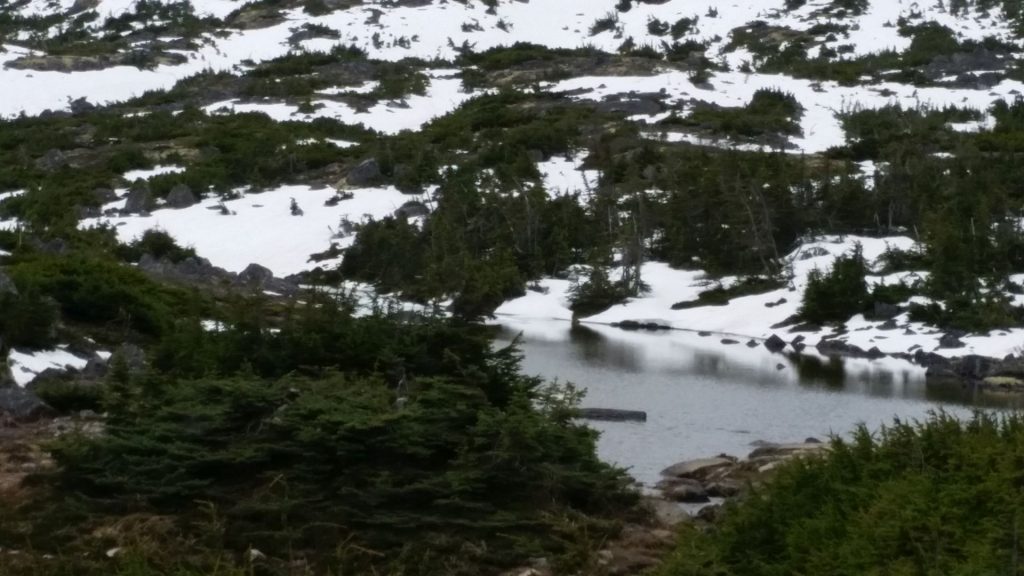 Day 4 (Skagway) – I’d say that Skagway had the look of what I thought Alaska was going to be. Much more mountainous, snow caps, rainy and a little cold. We also saw these odd-looking things above the road we were taking. A pole with a bit of red on one end. However, the tour guide was quick to inform us of the true use of such things. You see, in the winter, they still need to have use of the roads. Snow plows have to go out and clear as best they can. But, with all the snow, the road can get a little (a lot) obscured, so in an effort to keep you “on the road” you best stay on the good side of “the red”.

Yes, apparently Alaska has all sorts of way to kill you! 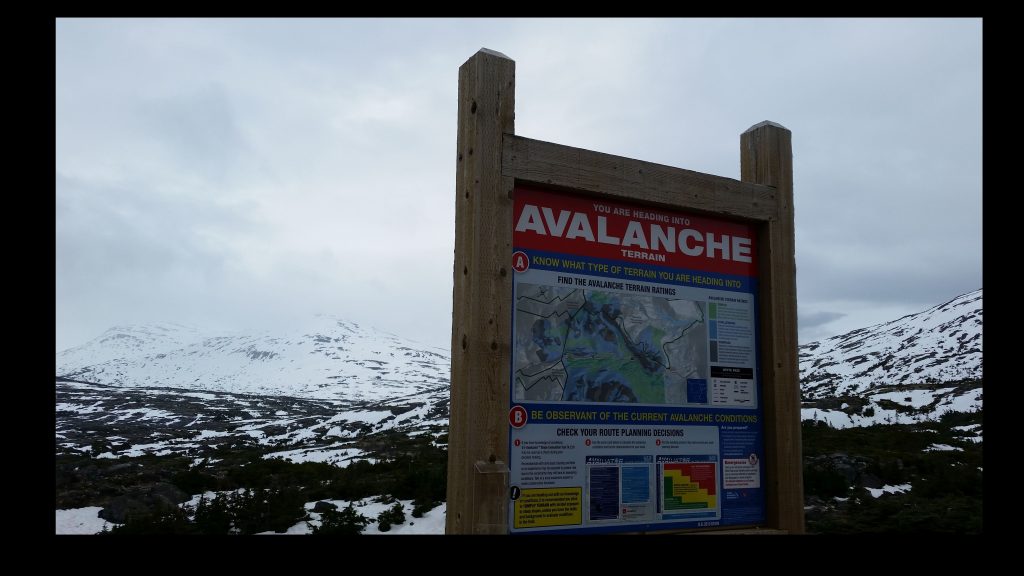 Day 6 (Ketchican) – Quick note. When the tour guide tells you to meet the van at the “Rainfall Gauge”, this is what they mean: 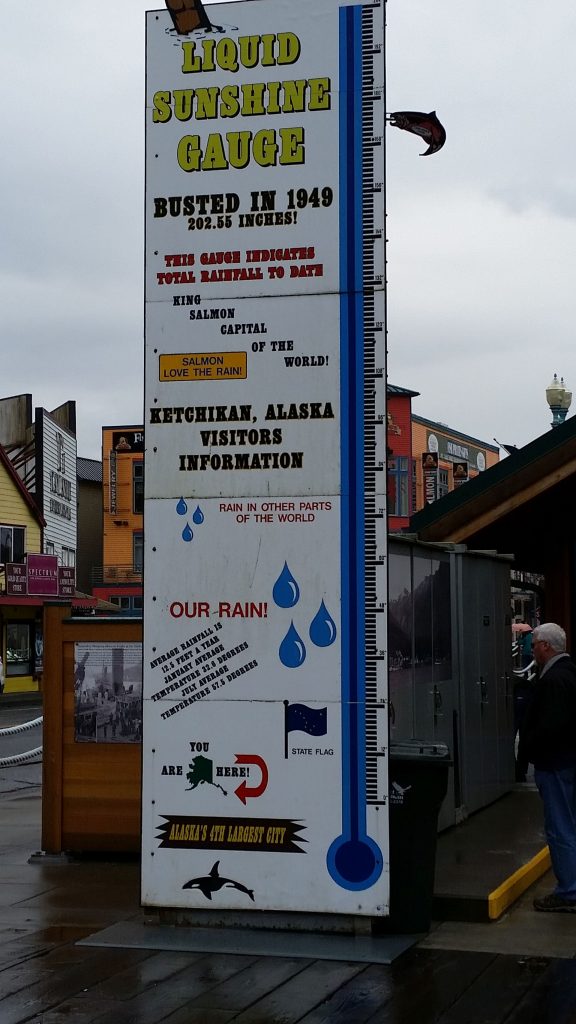 Writer of comics and novels. In 2006 his first short story "The God That Failed" was published by Terminus Media in their debut comic Evolution Book 1. Since that time he has had stories published in Terminus Media's Evolution Book 2 and Evolution Special, Kenzer and Company's The Knights of the Dinner Table, and Four J Publishing's The Burner #3. Currently he is eagerly awaiting the digital publishing of his first creator-owned comic The Gilded Age #1 to be published online as well as his first novel The Dark That Follows later this year.
View all posts by John McGuire →
Tagged  Alaskan Cruise, Juneau, Ketchikan, Sea Lions, Skagway, starbucks, vacation.
Bookmark the permalink.