Some days I don’t know what to write about. Those are the days (nights) where I struggle with words, getting lost in the muck and mire, and trying to determine a subject to fashion some kind of thoughts around. Those are not my favorite evenings. I pound my head against the wall looking for any glimmer of inspiration.

I wish I had that problem tonight.

There’s a story told about me when I was little. Somewhere in that 2-5 range. My grandparents owned a junkyard. It was this crazy, magical, weird place I would see for a week at Christmas and maybe a couple of weeks during the summer. And they owned a lot of dogs. I’m not sure if it was to help protect their land or because they liked dogs or maybe a mixture of the two. Regardless, there was at least 4 or 5 at any given time outside. Most, if not all of them were tied off to something (a tree, a car, their dog house). So they had some amount of rope to move around, but certainly did not have free reign of the yard (sadly).

Some of the dogs were friendlier than others, but even the not-so-nice ones you could maneuver around like they were barking land mines, knowing that if you stuck to the proper path, their slack wouldn’t let them get to you.

One of these dogs was either named or nicknamed “Satan”. And it wasn’t because everyone in my family was a big fan of a certain Dark Lord. No, the dog apparently had earned his name through pure meanness. So you didn’t hang around to pet Satan. You walked around him as quickly as possible and hoped the chain would hold for one more day.

One day everyone was outside and I decided it would be a good idea to pet the “doggie” – and for the briefest of moments time stopped for everyone there. They had no idea what Satan was going to do. And I’m sure if he wanted to I could have ended up a rag-doll, tossed back and forth within its jaws, before Dad or anyone else could have gotten to me.

But none of those things happened. Instead Satan decided to let me pet it. To love on it a little bit. When Dad eased over to try and retrieve me, Satan growled at him, but had no problem with the little one. 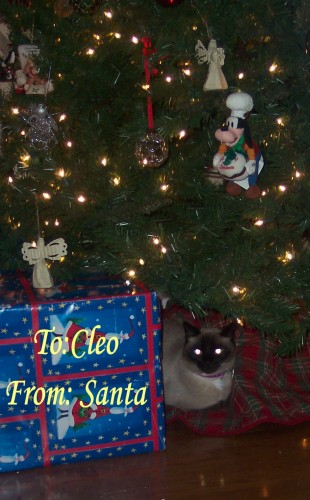 Around 9 or 10 Mom brought home a Calico cat, Muffin, who my 4 or 5 year old sister decided needed to live in her purse or drawers or something else traumatic. So the cat did what any sane person might have done and hid behind the washer and dryer. When I came home, it was left to me to coax the little kitten out from behind its hiding space.

Muffin slept in my room most nights after that.

When a ferret adopted our family (no, really, it came to our house and set up shop even with two outdoor cats prowling the grounds), I was the first to garner its trust. It ended up eating directly from my hands that first night.

I bond with my animals. I talk to them, confide in them. When I started writing comics late into the night, Cleo would sit beside me at the desk – monitoring my progress. Being my little muse.

Later Westley and Inigo took over those chores, ensuring these blog posts and the comic scripts and the novels and the short stories and everything else in between would have some stamp of feline approval (or at least that’s what I tell myself).

Over this past weekend, I was working at the computer when I heard a commotion outside our house. We have an outdoor cat, Fiona, who resides just on the other side of the front door. Sometimes other neighborhood cats will sneak over and try to steal some of her food, and they throw down (except for “Marvin” the possum, who sometimes makes an appearance – he is more than welcome to graze).

I didn’t immediately move, typically waiting for that next level of “fighting” before trying to save the day. The next sound told me it was a little more than a scuffle, so I went over to the front, and turned on the outside lights. As I opened the door I expected to scare off one of those enemy cats. Yet, instead of something small, a “dog” fled the scene… and it looked like it was carrying something in its mouth.

I hurried to put on shoes, grab a flashlight. I tried to find Fiona in the bushes. I went down to the lake area behind some of our neighbor’s houses… trying to find any sign of her or the beast who might have had her. The whole time trying to get the image of it possibly carrying something from my mind. My wife joined the fruitless search.

The next morning it was more of the same. We walked through the woods around the lake. We sent out word to our neighborhood board.

This story doesn’t appear to have a happy ending.

I get that outdoor animals don’t live as long as their indoor counterparts (and we tried to bring her inside – it didn’t work with the two boys already here). And I know that this was a possibility. That she could be hurt or injured, but she was a happier little girl outside than she had been during those inside days). 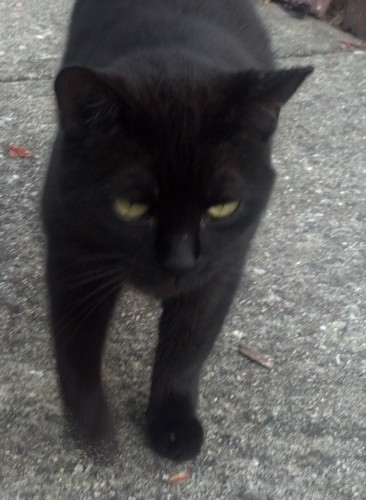 And I know there are bigger things happening in the world (directly to my family, in fact)… but, in the little slice of life I live in… in this moment… I have lost a furry friend.

And it makes me sad.

Writer of comics and novels. In 2006 his first short story "The God That Failed" was published by Terminus Media in their debut comic Evolution Book 1. Since that time he has had stories published in Terminus Media's Evolution Book 2 and Evolution Special, Kenzer and Company's The Knights of the Dinner Table, and Four J Publishing's The Burner #3. Currently he is eagerly awaiting the digital publishing of his first creator-owned comic The Gilded Age #1 to be published online as well as his first novel The Dark That Follows later this year.
View all posts by John McGuire →
Tagged  Cleo, Fiona, Inigo, John McGuire, loss, pets, Westley.
Bookmark the permalink.