The saying (or the song, I can’t remember which it really is) goes – Don’t Look Back in Anger…

Yet, we as humans are really conditioned to either reflect or to advance. I’ve talked about before how we should all live in the present tense. That too much time spent on the past or the future is not good for you.

Don’t play the What If Game. You know the one, where you take every success and failure, every “I should have taken a left turn at Albuquerque”… all of them and pull on that thread for days. 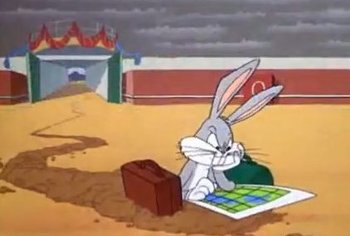 Bugs totally gets it.

It keeps us up at night. The only worth to spending all the time obsessing and worrying is if we (somehow) come to a conclusion (and we almost never do) and then make different choices the next time we are presented with that problem (yeah, maybe that will happen). Which is kind of the rub in all of it, because you will never be put back into that exact situation again, with those exact sequence of events leading you to the EVENT. You are the person today exactly because you made the “wrong choice” way back when.

Something with writers though, we’re never truly done with something. Up until the moment someone hits the publish button on the blog, short, comic, novel, movie, whatever, the work is never truly done. Oh, it can be version one thousand seven hundred and fifty three… and you can swear up and down that you aren’t going to look at the damn thing one more time. That it is as done as it ever is going to be.

All of it is lies we tell ourselves so that we can sleep at night.

I caught a random glimpse at a piece of writing I worked on a couple of years ago. Something I had not even looked at since it had become “locked” (though it hasn’t been locked fully, hence why it was getting looked at). And in doing the quickest read of a section of the script I had to shake my head… because I saw something that suddenly irritated me was even in there. And I KNEW I could fix it. That line which was fine back then, now grates the back of my mind.

Crazy. The thing has been sitting out there for over two years, but…

I should look on that line and smile at its imperfect structure. It’s awkward bits of dialogue. The clunkiness and how it falls from the mouth like a piece of lead. I should celebrate its very existence, and I should be overjoyed not because it is bad, but because I can see the flow within it. I should be happy that the bits and pieces of writing I have compiled over the last few years has given me a new form of insight (whether I realize it or not). The very idea that I can suddenly recognize the mistakes of my past should be a triumph.

But I can’t and I won’t, because it’s wrong now and needs to be fixed. I need to pull out the file and fix it. Right now. Stop the presses, don’t take another moment doing something else. Who cares if we’re long past the point where I should be able to change things. Who cares if it probably has bothered no one else on the project before now.

I mean if I was to even mention it to the co-writers they might get some form of the earworm and be unable to focus on their day to day lives without reliving the sentence.

But I can’t. It is long gone from my hands, pencils long since dulled from writing it. New computers have been bought in the interim. Dozens of people have given their ok for it. So maybe I’m wrong. Maybe there is nothing really wrong with it.

I have to let it go. Take a deep breath and let it all out. Don’t dwell and don’t think upon it again.

Now it becomes my own personal What If Game for the night.

Wish me luck in going to sleep.

Writer of comics and novels. In 2006 his first short story "The God That Failed" was published by Terminus Media in their debut comic Evolution Book 1. Since that time he has had stories published in Terminus Media's Evolution Book 2 and Evolution Special, Kenzer and Company's The Knights of the Dinner Table, and Four J Publishing's The Burner #3. Currently he is eagerly awaiting the digital publishing of his first creator-owned comic The Gilded Age #1 to be published online as well as his first novel The Dark That Follows later this year.
View all posts by John McGuire →
Tagged  John McGuire, what if game, writing.
Bookmark the permalink.