Interview with Jonny Ree of Bouncyrock Entertainment about TaleSpire

Who wants to achieve a tabletop RPG experience online? Bouncyrock is kickstarting a project to combine these two platforms in a new way. To help out with this, I asked one of my more tech-savy friends, Wolf, to help me with the questions as I talk to Bouncyrock about TaleSpire. 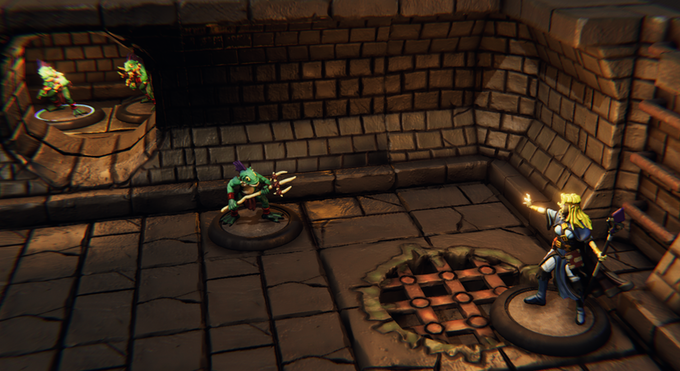 EGG EMBRY and WOLF (EGG/WOLF): Thanks for talking with us. For those individuals that are not familiar with Bouncyrock Entertainment, what does your company do?

JONNY REE (JR): We started as a group making mods for Neverwinter Nights and Neverwinter Nights 2 back in 2005. Since its conception, we’ve worked together on a lot of prototypes and game jams in our spare time. About 3-4 years ago we started working on TaleSpire as a part-time project, and it recently moved into a full-time endeavor.

JR: TaleSpire is a different way to play pen and paper roleplaying games online, one which focuses on delivering a visual and tactile experience for players and game masters alike.  As a GM, you can create campaigns, build a world, either by yourself or collaborating with others real-time. Then you can invite players to bring their characters into a game of your favorite P&P roleplaying system.

The game focuses on build and play being seamless, so GMs can quickly respond to the will of the players, while still keeping control over the flow of the narrative.

As a player, you can tint and name your characters before bringing them into the game. Then interact with objects, roll dice, or emote to express yourself.

UI [User Interface] is kept simple and out of the way as much as possible, to keep the focus on the presentation and interaction.

It aims to bring that little extra to your P&P games.

EGG/WOLF: Through your combination of digital miniatures and cinema effects, how do you see this improving the “tabletop” experience?

JR: How this improves the “tabletop” experience is most likely entirely subjective. People have different things they look for when playing P&P, therefore to which degree TaleSpire will improve that is a variable. There are certain things we want to achieve and feel we’ve been able to do for our own games with TaleSpire.  The obvious one would be to bring miniatures to people who wants them for their P&P sessions but are unable to for various reasons such as cost or time. A more personal experience is a different type of immersion. There is something special that happens when interacting with the world close up and personal. Similar to how video games put you in a zone. We also found space awareness changes a bit from traditional 2D maps; moving and thinking vertically becomes more natural as you see the relationships between floors.

Finally, we’ve seen some examples of people who have been on the fence about playing P&P roleplaying, now wanting to jump in.

We’re not looking to replace the table experience or the “theatre of the mind”. But we do hope we’ll be able to help the process.

EGG/WOLF: “TaleSpire is not tied to a specific game or ruleset; if it’s role-playing on a square grid we have your back.” For TTRPG there are a number of different mechanics, such as drawing cards rather than rolling dice. What’s your approach to supporting so many different systems?

JR: Currently, we assume that players and dungeon master handle these offline. We’re not trying to do what Tabletop Simulator has already achieved. We do want the tools to be more focused on the visual aspects of playing. We might have to re-evaluate some of those things once the game goes into Early Access, as we’ll be working with the community on where to take TaleSpire going forward.

EGG/WOLF: Your digital miniatures and terrain pieces featured on your Kickstarter are of a medieval-fantasy flavor and one of the stretch goals mentions a cyberpunk theme. Do you have other themes planned such as sci-fi, Lovecraftian horror, or super hero?

JR: We don’t have any additional themes planned (except for Cyberpunk, if we reach that stretch goal), but we would love to cover multiple ones. There is quite a large set of assets required to cover a single theme fully, so we’ll be focusing on medieval style fantasy initially. Once we feel we have decent coverage we’d look to the community to see which settings would make the most sense. There are also options of teaming up with others to get some of these other settings to TaleSpire. And finally, there is modding.

EGG/WOLF: While you have an alpha with plans to reach beta in six months and eight months to early access, your timetable is a tight for such an ambitious project. How clean is the alpha version? What buttons and whistles are planned for the beta?

JR: The Early Alpha version as we’ve been calling it is probably closer to the Early Access version than one would expect from an Alpha. Most of the key features already exist in some form, even if we’ll be redoing them based on feedback or general performance. These rewrites are by no means trivial, but we do have a good picture of what is needed. Making those changes as well as focusing on making the core experience feel great is our priority until our Early Access release, which is the timeline mentioned.

EGG/WOLF: Your Kickstarter highlights the ability to mod the system using the TaleWeaver toolset and, if the respective stretch goals are reached, the Hero Crafting System as well as the customizable rule system. How intuitive will those options, and their integration with TaleSpire, be for casual GMs?

JR: The Taleweaver toolset will be for people who already have some modding experience, or at least have time to start getting into it. This will initially be for artists who want to expand the tiles, characters, and creatures in game. Or for designers who want to make variations of existing tiles by combining models into new ones. We do aim to make Taleweaver easy to use, but it will require some knowledge of the Unity Game Engine as well as some game development terms.

The Hero Crafting System is meant for in-game integration. This would be what players are faced with when creating miniatures to take into a game itself, but also gives the GM some options for creating unique NPCs.

Finally, the “customizable rules system”. The stretch goal in this case also includes a lot of R&D, so exact implementation is still not set. What we hope to achieve is a system to encode rules so that it will be made available contextually, based on what the players want to do. Helping the GM to make the correct calls in these situations, while keeping UI clean is the goal.

EGG/WOLF: Of all of the elements and stretch goals planned for this system, which one are you most excited about?

JR:  Wow, that is a tricky question. We’re quite excited about the game in general, so seeing how others interact with TaleSpire would probably be on top of the excitement list. We’ve already seen some fantastic examples of this in our Early Alpha run.

EGG/WOLF: Which distribution platforms and digital stores do you plan to release on? Mac, Linux, ChomeOS, iOS, Android, etc.? Of particular interest given recent announcements, will Bouncyrock be releasing a Nintendo Switch port? 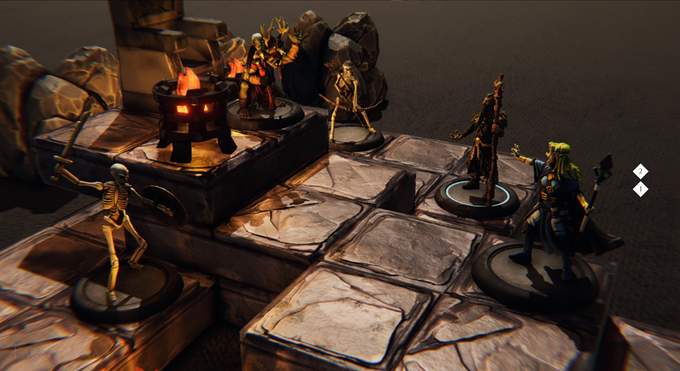 EGG/WOLF: Are there plans for a store where fans/modders can sell their creations?

JR: This is something we would love to do in the future, but needs a lot more discussion internally. Something we’ll be looking into after the Early Access run.

EGG/WOLF: Thank you for talking with us. For those interested in learning more about Bouncyrock and TaleSpire, where can they learn more about you?

JR: Thank you for the questions!

We have a website at https://bouncyrock.com/ which will take you to the project as well as the social media where we are reachable. The most complete description of TaleSpire can be found on our Kickstarter page https://www.kickstarter.com/projects/bouncyrock/talespire

I’d also mention the Discord channel which is linked on the website. This is where the community is most active, and we can be found answering questions as well.

Egg Embry wrote comic book short stories, edited comic book series, wrote and drew a webcomic, and contributed to comic book journalism across the 2000s. Now, he buys the opportunity to write for a variety of tabletop role-playing games in the tradition of vanity press. NOTE: Articles may includes affiliate links. As a DriveThruRPG Affiliate/Amazon Associate/Humble Partner I earn from qualifying purchases.
View all posts by Egg Embry →
Tagged  Bounyrock, Kickstarter, TaleSpire, wolf.
Bookmark the permalink.