If all of your friends jumped off the Brooklyn Bridge would you do it?

If all of your friends wrote articles about their favorite video games, would you complete the series?

There was a guy who lived down the street from me when I was about 11 or 12. While I was stuck playing Space Invaders for the ten thousandth time, he had a Nintendo. No matter how much I pleaded going into Christmas that year my parents wouldn’t budge. I had an Atari and we had a computer. My Dad in particular couldn’t figure out why I’d want a game system when a computer could play games and other things. Luckily my buddy would let me come over after school, and from about 3 until around 6 when it was time to go home we’d do one of two things: play basketball or play Nintendo. Typically we’d play outside when the weather was nice and when it rained we’d move inside and play Super Mario or Contra or even Duck Hunt. There were more than a few afternoons where I wished for storms so that I could play. Anything was an upgrade over what I had. Here were games with better graphics and story lines. Heck, you could beat these games… there was no “beating” Joust, things just got faster and harder.

I think it was the following Christmas that the Nintendo came… oh, happy days.

But when I look back to those early days I’m not sure a list of 6 is even fair. There were so many games that I spent hours upon hours playing and reading old issues of Nintendo Power to try and gain even a slight edge. But far be it from me to buck the trend. 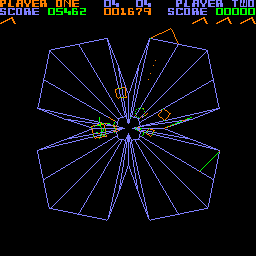 Yes, it doesn’t look like all that much, but when you’re 8 it is amazing!

My first “favorite game” was one that I played at the local arcades early on. Instead of a joystick you had a dial that you’d spin and slam your hand on the firing button as fast as you possibly could hoping to hit all the alien/insects/whatever the heck they were from crawling up the Doctor Who style hyperspace tunnel.

At least, that’s how I like to remember the game. I believe it was more my memory of the game, than the actual game play itself, but for many years I’d look specifically for this game whenever I entered an arcade. 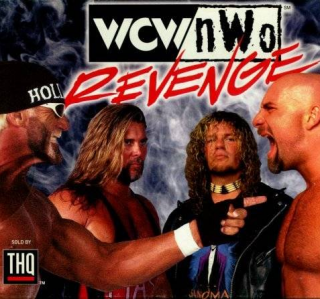 I’ll admit it. I like wrestling. Back in the 80’s the best part about Saturday afternoons was the fact that one of the local stations literally played wrestling shows all day. Guys I’ve never heard of and guys everyone has heard of. These were the days of the WWF and then everyone else who were “stuck” in the regional organizations. Flash-forward to the late 90s and wrestling was going through a second golden age. Those wrestlers from the 80s that we all recognized were beginning to clash with the newer generation. And possibly the biggest storyline throughout that decade was the NWO vs. WCW feud. It turned the fan-favorite Hulk Hogan into a villain, something the ten year old me would have never thought possible, and the teenage me thought was amazing. This game really set itself up perfectly by captializing on that feud, splitting your characters into their NWO or Wolfpack or WCW.

But the reason that I list it among my favorite games is that it was the first wrestling game I had ever played that used a “Grapple” system. Where in older games it sometimes came down to who could hit buttons faster than the other guy, this game encouraged you to perform moves after the characters locked up. For some reason this made it feel more like skill was involved. It really introduced a strategy that future wrestling games have seemed to abandon to go back to the “push buttons and hope” techniques.

I’ve played wrestling games since this one, but this is the last one I would pop in just for the hell of it and run a match… that’s how good the controls were. 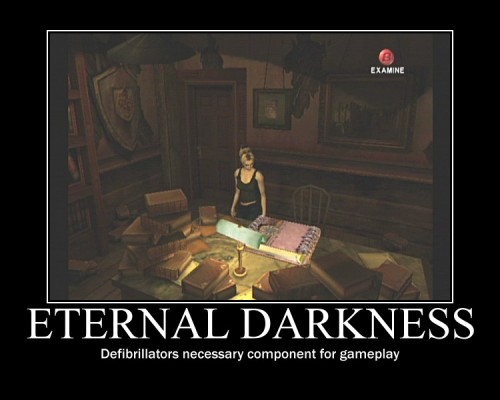 The single scariest game I have ever played.

Many a night I would turn off all of the lights in our town house and play this weird Lovecraftian adventure through time. You see, you’ve inherited the family house, which would be great if it wasn’t right on top of some kind of other-worldly portal. You would move around the house looking for clues about the overall plot and read about these ancestors who’d also had the misfortune of ending up in the Old One’s crossfire.

But the best part of the game was the Insanity Meter. As you took damage or weird stuff happened, your meter would increase. At first you might just hear strange noises coming through the TV. Maybe a baby cries in the distance… but you know that it is just a game. And then you open a door to look in a room you’ve looked in 10 times already and a dead body is waiting for you.

Yet, all of that was child’s play for how the game played you. My favorite moment, that moment when I knew that this might be one of the greatest games I’ve ever played, was when, in mid-mission the screen turned black and a few words came up on the screen asking you to buy the full version of the game. As I say there, staring at the screen… thinking I’d somehow gotten a defective game, things flipped back to normal and you were back in the game. 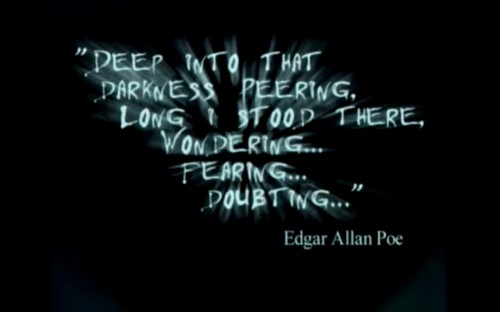 If they ever do an Eternal Darkness 2, I will be buying that game at midnight and taking the next day off… that’s how good that game is. 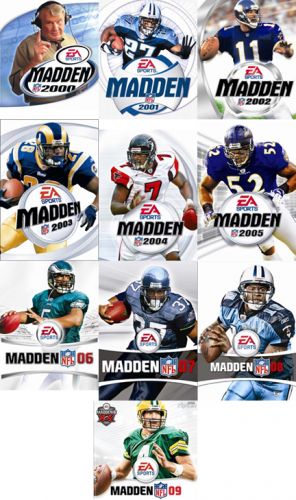 To be fair I can’t narrow this one down to a particular version. I’ve been playing some form of Madden football games for the better part of 2 decades. Now, I must admit, even though it is the best football game available (and the only one with the NFL license so that you can play with your favorite teams and players), I don’t buy every release. Typically I buy the new one every other year, as things (improvements) don’t change that much year to year. To me, this is the only football game worth bothering with (well, since Techmo Bowl back in the day, I guess). Upon releasing the latest one from its plastic prison, I launch directly into franchise mode with the Miami Dolphins and rack up Super Bowl victories until I grow tired and move on. But like a warm blanket, whenever I get the itch to play, it’s there, my franchise waiting to go into year 5 or something. 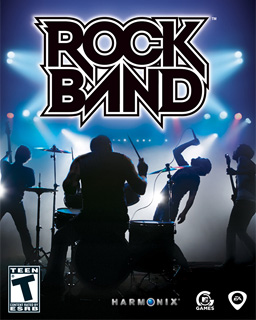 Hey, I can be Eddie Vedder if I want to be!

This might be the greatest party game ever invented (apologies to Mario Kart) (I’m including the full gambit of Rock Band Games in here because of their song export feature).

For those that have played the game, I think they get it. Those who haven’t, I can see how it would be an odd thing to want to play karaoke with somebody holding plastic guitars and someone else banging on plastic drums. And yes, it is odd. I’d probably be one of the first to crap on the idea had I not gotten hooked on Guitar Hero first. Somehow it just works.

And then there is the the soundtrack. Without a solid soundtrack of songs everyone will know, the game wouldn’t have worked. But they even provided a work-around when you got tired of Dani California for the tenth time with downloadable tracks so that you could customize your experience. You like more heavy stuff? Go and spend a few more dollars on those songs. Want Pearl Jam’s Ten album in its entirety (yes please!)? The only bad thing about the game is that this whole genre of games seems to have died out… no new songs are being converted. Still, there are plenty of songs out there to get, so odds are this is a very small problem to have.

I still remember the very first night I bought the full band pack (a birthday present) we brought it over to some friend’s house who were going to have us over for game night. I might have felt bad about hijacking the event, but since everyone seemed to love it – I’ll count that one as a win. Recently Courtney and I broke out the plastic instruments for a comeback tour. Any game that my wife actually gets excited about playing is worthy of my list. 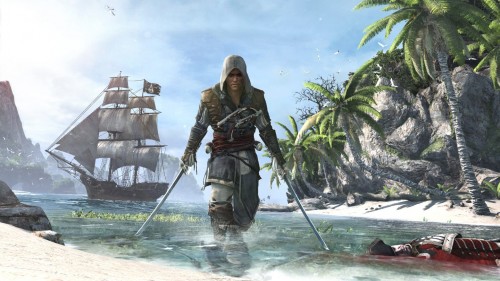 Yo ho ho, and a sword in your gullet!

Yes? Ok, let me just say that when I finish a game and am immediately looking for something more to download, more missions, more anything it is either that the game was waaaay too short or the game ruled. Having just finished Black Flag, this one falls into the later category. I skipped a couple of installments on the way, but tying the franchise into the Golden Age of Piracy not only made complete sense, the fact that captaining the ship didn’t feel like a minor bit of the game, but actually was integral to multiple pieces of the plot, made it almost feel like two games in 1.

The overall story line seems to be getting closer and closer to revealing what’s exactly going on, which is cool as well, as the story outside of the stuff in the past (this makes sense if you have ever played any of the games) does a decent job of feeding you just enough information to have your brain work overtime.

Writer of comics and novels. In 2006 his first short story "The God That Failed" was published by Terminus Media in their debut comic Evolution Book 1. Since that time he has had stories published in Terminus Media's Evolution Book 2 and Evolution Special, Kenzer and Company's The Knights of the Dinner Table, and Four J Publishing's The Burner #3. Currently he is eagerly awaiting the digital publishing of his first creator-owned comic The Gilded Age #1 to be published online as well as his first novel The Dark That Follows later this year.
View all posts by John McGuire →
Tagged  John McGuire, nintendo, xbox.
Bookmark the permalink.