There is a term for comic books that became a slightly bad way of referring to them: Funny Books. Meaning they were good for a few laughs, but that was about it. Yet, my friend and I like to take that derisive term and embrace it when we talk about comics. Whether it is Marvel or DC or Image or anything and everything else out there – they are our funny books. They should bring smiles to your face because you are enjoying what you’re reading because that means the people creating the book must have been having “fun” as well. 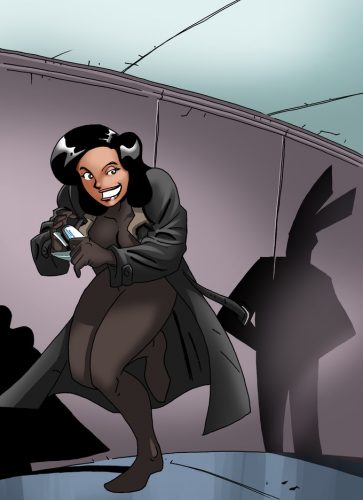 From Shades of Vengeance Comics

Penumbra: Fear the Bunny Lord, is the story of the Mistress of Shadows meeting her greatest foe, a lagomorph with great night vision!

On a heist to steal a piece of alien technology, rumored to increase the abilities of any Empowered who holds it, she faces off against Wild Hare. He has an aim to test his skills against the slickest of escape artist. Together with the small army of security, Wild Hare will make sure it isn’t Penumbra’s lucky day.

Like I said in the preamble, this looks like a comic where the creators are just cutting loose and having fun. I mean, a master thief up against a two-legged bunny? And the thing is that comics don’t always have to be these dreary things that we force ourselves through just to have said: “hey, I read that thing – yeah, it depressed the hell out of me, but I read it!”

I gotta think that after you read this issue the response is much more likely to include lots of laughter rather than tears.

The other thing about this campaign is that the overall amount being asked for is only about $467, so the rewards all lean towards the various digital rewards. However, if you want to spring for something a little different, the $66 level has a “Personal short story by the writer including Penumbra and an Original character of your choice”. If you have that one character you wish you could include in other people’s worlds, here’s your chance. 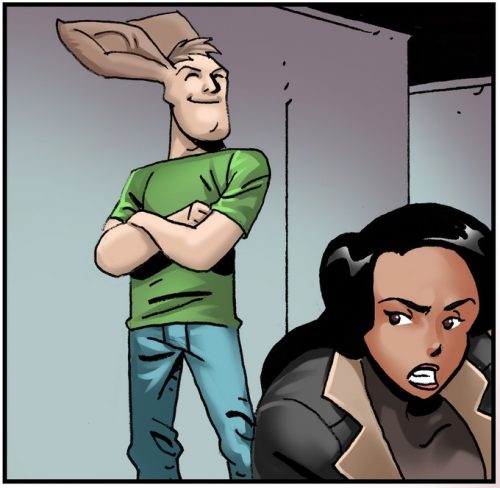 Master thieves and the Rabbits that chase them. Nuff said. Go get yourself a funny book.

To learn more about Penumbra, check out the Shades of Vengeance website here.

Writer of comics and novels. In 2006 his first short story "The God That Failed" was published by Terminus Media in their debut comic Evolution Book 1. Since that time he has had stories published in Terminus Media's Evolution Book 2 and Evolution Special, Kenzer and Company's The Knights of the Dinner Table, and Four J Publishing's The Burner #3. Currently he is eagerly awaiting the digital publishing of his first creator-owned comic The Gilded Age #1 to be published online as well as his first novel The Dark That Follows later this year.
View all posts by John McGuire →
Tagged  Jonathan Lewis, Kickstart the Comic, Kickstarter, Penumbra, Sebastian Sala, Shades of Vengeance, Slamet Mujiono.
Bookmark the permalink.