Two licensed properties are coming to Savage Worlds, an Ennie-winning game is getting an expansion, and a not-quite-Dark-Sun setting by the co-creator of Dark Sun is getting a spiritual successor for the world’s most popular role-playing game. These are all worth checking out.

“Pulp action at its finest! Use the Fast! Furious! Fun! Savage Worlds game system in the popular cinematic world of Flash Gordon™!

With a deafening roar, Dr. Zarkov’s rocket ship, with Flash and Dale aboard, shrieks into the heavens and heads straight toward the onrushing planet with a madman at the controls!

We announced the Savage World of Flash Gordon™ at Gen Con in 2015, and now it’s here! Drawing inspiration from Alex Raymond’s original strips, the serials, AND the 1980 movie starring Sam J. Jones and Max von Sydow, this is far more than just a game, this is a definitive resource for all Flash Gordon’s adventures!

AND NOW…it includes a foreword by none other than Sam J “Flash Gordon” Jones himself! See the link here for more details!

Author Scott Woodard dug deep into the history of this genre-defining series, bringing every corner of the setting to vibrant life. Heroes can foment rebellion in Mingo City, marvel at the tree-cities of Prince Barin’s Arboria, bake in Volcano World’s Land of the Dead, and shiver in Frigia or the cruel Ice Kingdom of Naquk.

Best of all, for fans of Savage Worlds, The Savage World of Flash Gordon™ features all the new powers, Edges, Hindrances, and amazing gear you’ve come to expect…but also an incredible new Setting Rule called…

At the beginning of each session, the players are given the Cliffhanger token. When the group decides to use it, they flip it over to the CLIFFHANGER side! Everyone gets a reward of some kind–such as drawing or refilling their Bennies, or gaining Conviction (more below!). But then the situation goes from the proverbial frying pan into the fire in some way!

Once the Cliffhanger is in play, the GM either decides what happens based on the circumstances, or better yet, lets the players choose from a number of options…and we even have cards for them! They’re print and play now, but keep watching the skies and we’ll see what happens, heroes!

Example: Flash, Dale, Hans, and Thun battle Ming’s soldiers on the streets of Mingo City. Hans is out of Bennies, so another shot from the enemy’s atom pistol will spell his doom! Hans’ player calls for a Cliffhanger. The other players agree and they choose “Out of the Frying Pan!”

The GM tells everyone to take five while she sets up the new scene. She decides one of Ming’s soldiers has thrown a grenade that cracks open the city streets. The heroes plunge into the sewers below, straight into the lair of an angry gocko and the cave men who worship it!

The GM narrates: “Flash and his companions had Ming’s minions on the run! Little did they know a new terror lurked beneath their very feet!”

The group faces a new challenge, but have refilled their Bennies and are ready for action!”

What does this campaign have going for it?

There is only good here! The kind of good that’ll save every one of us! 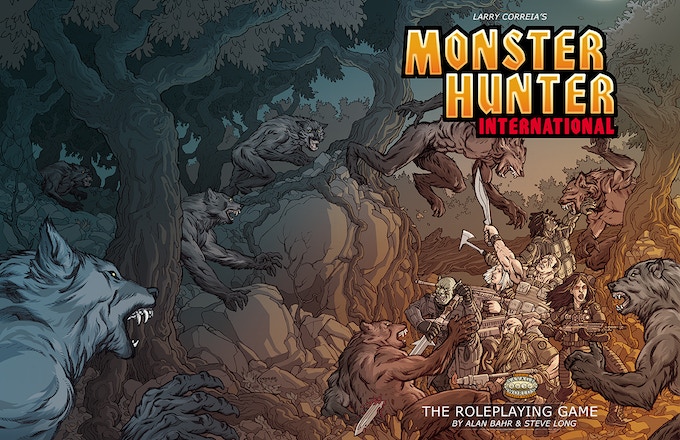 Written by Larry Correia, Monster Hunter International is an urban fantasy series about professional monster hunters who battle against the things that go bump in the night!

As the slogan goes…”Cowboy up, and get paid.”

Larry is a big fan of Savage Worlds and when we approached him about doing an updated MHI roleplaying game, he immediately wanted to use one of his favorite rulesets, so that’s what we did!

Using the rules in the book, you’ll be able to play a variety of teams in the MHI Universe, including the titular team: Monster Hunter International.

The book will also include:

We’re keeping this simple. What you see on the pledge levels is what you get!

Flash Gordon and Monster Hunter International are both licensed settings for the Savage Worlds RPG and, while not exactly one-for-one the same (sci-fi pulp versus urban fantasy), they’re still going head-to-head and I’m curious to see the market reacts to them. As with Flash above, the setup for this novel series is ideal for translation to Savage Worlds – You’re a monster hunter… GO! HUNT! MONSTERS!

Add to that, one of the stretch goals is to get the novelist behind Monster Hunter International to create a special adventure for the book and this is a winner.

“Sixth Stretch Goal at $80,000 – A special adventure, written by Larry Correia himself will be added to the corebook!”

“The first rules supplement for the ENnie-Award winning RPG The Dark Eye vastly expands character options for the world of Aventuria.

Experience The Dark Eye and its ENnie-Award winning setting Aventuria in even greater depth with the Aventuria Compendium.

Whether your characters prefer weapons or words, the Compendium gives your heroes exciting new options for interacting with the world of The Dark Eye! As a player, choose the rules that you like best. Options can apply to all characters or even just to one—you decide how you want to play!

The Aventuria Compendium and the Aventuria Armory broaden the setting of Aventuria by introducing new character professions and dozens of essential pieces of equipment. Explore new paths to heroism in Aventuria with the first major rules supplements for The Dark Eye!”

The Dark Eye won a 2017 Silver Ennie Award for best setting (Dark Eye – Aventuria Almanac) and this Kickstarter expands on the game. Want to give this game a sh0t? Click here to get the free preview of the game.

To see examples of Ulisses Spiele on DriveThruRPG, click here.

“A totally new Player Rulebook from one of the co-creators of 5E for the most brutal fantasy RPG out there.

In 2014, Tim Brown, co-creator of the Dark Sun campaing setting, released Dragon Kings through a very successful Kickstarter campaign and to much acclaim, with rulesets for Pathfinder, Savage Worlds, and 13th Age.

Dragon Kings showed us a ruthless and extremely dangerous world, with exotic races of humanoids and non-humanoids that depart from more traditional roleplaying games paradigms.

Khitus, the setting where Dragon Kings is located, is a world that is slowly dying. Its forest becoming deserts due to dreadful influences on the planet that are draining its natural resources.

With magic that takes a dreadful toll on those who use it, psionics are awakening. Races of long ago mindless insects are evolving and expanding, with a thirst for conquest that threatens the entire planet.  Lizardmen become cleverer by the day.

The world is changing as it dies, and only strong heroes have a chance to slow down or halt its demise.

That would be you.

Dragon Kings is a departure from more traditional fantasy settings, and has a darker and more exotic edge to it.

Add to this the intensity of the world and the new classes that it presented, and it’s impossible not to appreciate the vast potential and richness of this game.

The gorgeous art, the amazing cartography – Dragon Kings really stood high among the best and most innovative RPGs.

You can download the free gazetteer from here to get a great overview of the world.

And now, Dragon Kings is coming to 5E

With this project, we want to create a Player’s Rulebook to bring the 5E rules to Khitus.

To achieve that, we worked with the talented Chris Sims, one of fifth edition’s developers, and someone with more years of experience in the industry than politeness allows us to mention.

The Player’s Rulebook will contain races, class information, and more. It’s a book for Dragon Kings fans and fifth-edition gamers.

We expect the Player’s Rulebook to contain more than 20,000 words of text when it funds, with more content added as we hit stretch goals.

This Player’s Rulebook will be available both in black-and-white and color, and both soft and hard cover. That way everyone will be able to choose the edition that suits you best.”

Disclosure: I did some *minor* editing on this Kickstarter before it launched.

It’s not Dark Sun for 5e… But, it’s like Dim Star for 5e in the best possible sense.

“Dark Sun is Dark Sun, and I’m proud of it. If someone would give me the keys and let me drive Dark Sun again I would be happy to do so. I’m creating Dragon Kings to satisfy that creative ‘jones.’ Dragon Kings will share many of the same themes, but will also be its own, unique universe. Honestly, this gives me an opportunity to move in creative directions that just weren’t open to me before, and that’s pretty exciting.”

The setting already exists for Pathfinder, Savage Worlds, and 13th Age and, with Tim Brown involved, this offering will go a long way towards filling in for a much loved 5e setting.