Kickstart the Comic – The Few and Cursed #3

I love Westerns, but I’m not always sure comics love them. Much like Hollywood where their heyday was long before I was born, now it is a trickle here or there. Again, it’s lucky that Kickstarter exists to allow some of these genres a little opportunity to shine.

Of course, this one might be more of a post-apocalyptic western… 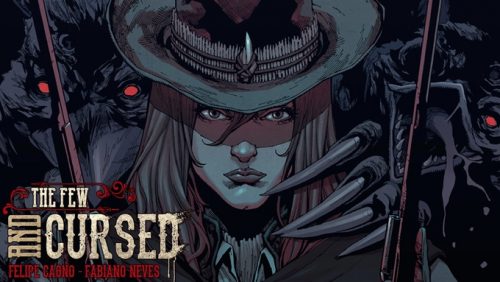 The Few and Cursed #3

She has no name, no home, and no family, just a title: Curse Chaser. Water on the planet has been gone for seventy years and mankind has been reduced to a handful few perpetually living in hell.

And no hell is complete without its demons.

People will do anything to survive. When their lives, their children’s lives, when their world has no chance, that old and forgotten evil curse seems pretty reasonable, it’s just that much easier to strike a bargain with the Devil.

But not under her watch.

The Few and Cursed is a post-apocalyptic western set in an alternate 1910 where monsters and the supernatural roam the wasteland that is now Earth. Going from town to town, crossing the oceans in horseback, the Redhead is the only variable possible of balancing the scale.

First, I have to be honest, the title grabbed me. Without knowing anything else, it caught my eye and made me click on the Kickstarter. From there, the setting and genre drew me in, and then the artwork finished the deal. On top of all of that I feel somewhat fortunate to have them already on issue 3 – it means that I’ll immediately have 2 issues to read once the campaign is over! And again, I have to note that it is amazing when you have the opportunity to do just that. Where missing that initial issue (or 2 in this case) isn’t the end for a potential reader.

One other thing about having those other two issues fund through Kickstarter… the 321: Fast Comics guys clearly know what they are doing. The first and second issues originally funded for about $16,000+ each. This one already reached their initial $6000 goal in the first 48 hours and looks like it will outpace those earlier campaigns.

What that really tells me is they not only provide a great product people have come back for each time. 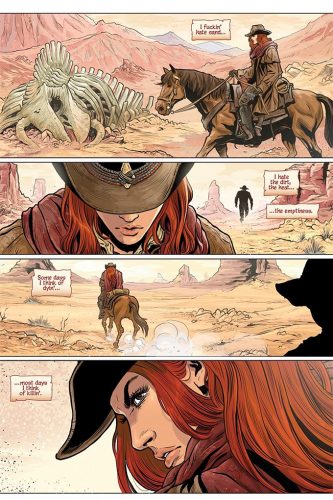 Artwork by Fabiano Neves From The Cursed and Few #1

Since you might have missed out on the first couple of issues, there is an assortment of both digital only and print + digital rewards to completely catch you up on the comic. As you move up the ladder, there is the opportunity to grab their anthology 321: Fast Comics Vol 1 & 2, a sketch book featuring Fabiano Neves’ art, or even a chase to get some of the variant prints they’ve done for all the issues.

For those with a little more money in their pocket, the $150 level offers an opportunity to get some original Redhead artwork.

Given their track record with this series (and a couple of other ones as well), plus the interesting idea, and gorgeous artwork… this one is a no-brainer. And if you were on the fence at all, they provide you with an assortment of preview pages from issues #1 and #2 to help sway you completely.

I already locked in to get my digital copies of the first 3 issues! 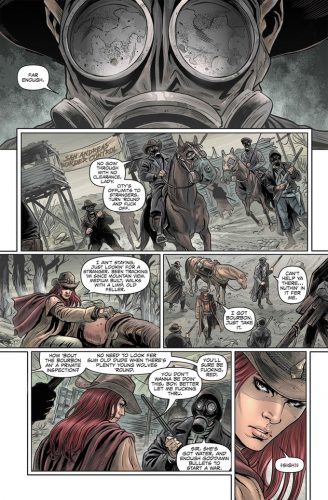 Artwork by Fabiano Neves From The Cursed and Few #2

For more information on The Few and Cursed or the rest of 321: Fast Comics, check out their Facebook Page here.

Writer of comics and novels. In 2006 his first short story "The God That Failed" was published by Terminus Media in their debut comic Evolution Book 1. Since that time he has had stories published in Terminus Media's Evolution Book 2 and Evolution Special, Kenzer and Company's The Knights of the Dinner Table, and Four J Publishing's The Burner #3. Currently he is eagerly awaiting the digital publishing of his first creator-owned comic The Gilded Age #1 to be published online as well as his first novel The Dark That Follows later this year.
View all posts by John McGuire →
Tagged  321: Fast Comics, Dinei Ribeiro, Fabiano Neves, Felipe Cagno, John McGuire, Kickstart the Comic, Kickstarter, The Few and Cursed.
Bookmark the permalink.