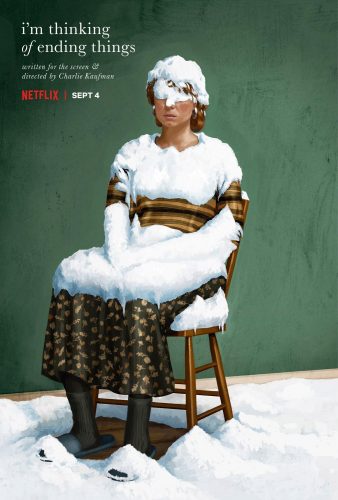 I’m watching this movie (based off the novel of the same name) and something is off.

I was led to believe that this was a horror movie of some sort which obviously can cover a ton of ground within the genre. You have slasher flicks, monster flicks, mind f- flicks, slow burn, fast burn, and everything in between. So I understand that you don’t always know exactly what you are going to get but…

I was led to believe I’m Thinking Of Ending Things was a horror movie.

And it really isn’t. Sure, there are plenty of moments within the two hour plus movie where you are a bit unnerved by what’s going on between the characters. The conversations have the appearance of being about something without saying very much at all. They are all surface level things being said aloud with undertones that hint at bigger issues.

The basic plot is that Lucy and Jake, a couple who has been together are taking a day trip to pay a visit to Jake’s parents. And while things have been decent between them, Lucy had been coming to grips with the idea that perhaps the two of them are not supposed to be together. The mantra of the title is repeated within her head throughout the movie. For the first third of the movie they are in the car on the drive there. This means there are lots of moments for the awkward silences hanging in between the two of them. And while it appears that Lucy is the only one who may be clued in their relationship may be headed toward a break-up, I think Jake has begun to realize it as well. Perhaps this trip is one of those hail marys where he sees this trip to introduce her to his parents as a big enough gesture that he might hang onto the relationship for a little while longer.

Here’s the thing, it isn’t until they reach the parent’s house where I began to suspect there could actually be something bigger at work here. And while there is definitely a ton of VERY weird things going on at the parent’s house. And while his parents don’t act entirely normal at times (laughter which feels almost forced and meals randomly being prepared).

But again, it’s never scary. Even a trip down into the sealed basement only reveals more questions about… well, the reality of the situation.

The two main actors are absolutely crushing it the whole time. I liked the character of Lucy, and was definitely wary of Jake through most of the movie. But…

Did I mention it was over two hours?

This movie could have done the same things with a much tighter edit (honestly I think a good 30 minutes could have been lost and it wouldn’t have made a ton of difference).

Maybe if I hadn’t seen the trailer for the movie or read the review of the novel on a list of best horror. Maybe had I come into it cold, I might not have left the movie feeling… cold.

Oh well, my search for this year’s horror movie gem is ongoing. Maybe the next one will be the winner!?!

Writer of comics and novels. In 2006 his first short story "The God That Failed" was published by Terminus Media in their debut comic Evolution Book 1. Since that time he has had stories published in Terminus Media's Evolution Book 2 and Evolution Special, Kenzer and Company's The Knights of the Dinner Table, and Four J Publishing's The Burner #3. Currently he is eagerly awaiting the digital publishing of his first creator-owned comic The Gilded Age #1 to be published online as well as his first novel The Dark That Follows later this year.
View all posts by John McGuire →
Tagged  I'm Thinking of Ending Things, John McGuire.
Bookmark the permalink.