You are about to enter another dimension. A dimension not only of sight and sound, but of mind. A journey into a wondrous land of imagination. Next stop, the Twilight Zone!

Okay. That might be an exaggeration, but you’re still about to see raw sketches and studies that until now only a few have been privy. Last November I met up with John R McGuire and J Edward Neill to discuss a project they were writing together, post-apocalypse fiction set in medieval times, aptly named Hollow Empire. This was to be a big project and it began like all projects do with a lot of brainstorming, sketches, and research. I read small portions from story, explored images of medieval town and cities, and began envisioning the world they had created. One aspect key to the cover was a city in partial ruins. Here are three sketches from the early stages, click through to see larger images.

From there we ended up going with the first sketch after we discussed the need for graves. Many graves. 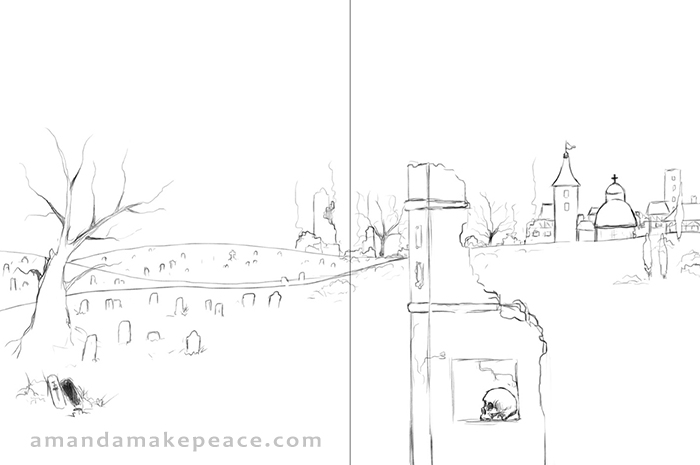 I still like this sketch quite a lot, but as I began painting I realized it just didn’t work. Sometimes that happens. Thankfully, I felt comfortable enough to approach John and J Edward with my concerns. Before doing so, I began reworking the idea and incorporating elements from those early first designs. I also took inspiration from the medieval ghost town of Craco. If it looks familiar you’ve probably seen it in a film or documentary. Craco was abandoned after an earthquake in 1980, but it had already been on the decline due to poor agriculture, landslides and flooding. When I approached the author duo again, I presented them with two quick studies, the original idea and my Craco study.

Lucky for my muse and I, we were all on the same page. They too went for my Craco idea and I spent the next four weeks developing that world. One feature I was happy to see return was the gravestone from one of the original sketches. Sometimes things stick with you and for whatever reason I couldn’t shake that gravestone from my mind. This is the final painting without the extra bits. 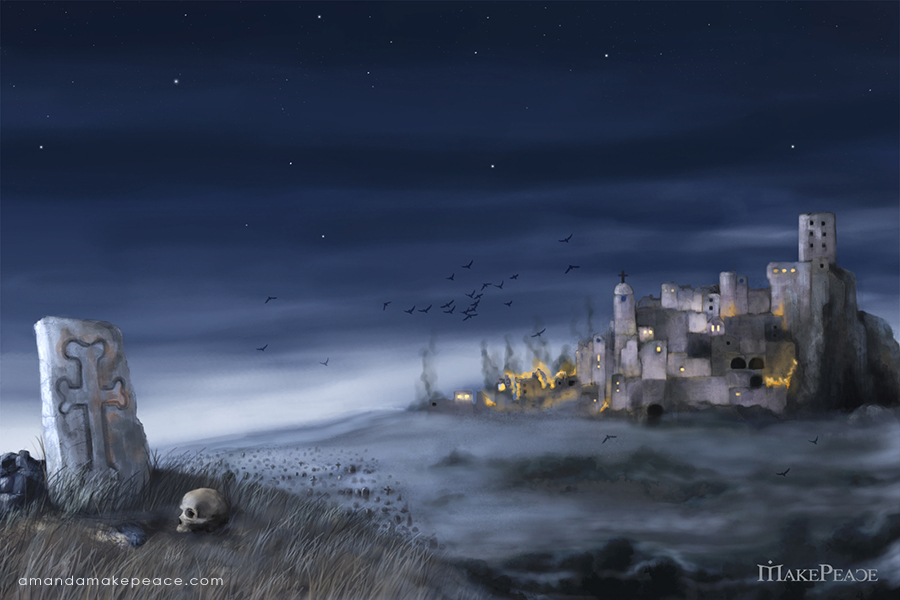 Hollow Empire by John R McGuire and J Edward Neill will be available in the coming weeks! Subscribe to our blog in the sidebar to stay in the loop.

Amanda Makepeace is an award winning illustrator inspired by nature, mythology, magical beings, and distant worlds. She is the co-founder of the Bird Whisperer Project, a monthly art challenge focused on spreading the the love of birds and art making for everyone. Her art has appeared in ENnie award-winning games and on the covers popular independant novels and anthologies. Her latest project is the cover art for the Long List Anthology Volume 4, a book featuring Hugo nominated stories. Amanda is a regular at Fantasy and SciFi conventions in the southeast, and an award winner at JordanCon, DragonCon, ChattaCon, and LibertyCon. http://www.amandamakepeace.com
View all posts by Amanda Makepeace →
Tagged  art, book covers, Dark Fantasy, Hollow Empire, illustration, medieval cities.
Bookmark the permalink.