PRESS RELEASE – CLAIM YOUR HERITAGE, LEVEL-UP, AND JOIN THE CRUSADE IN PART 5 OF DOOMSDAY DAWN, “THE HEROES OF UNDARIN”

CLAIM YOUR HERITAGE, LEVEL-UP, AND JOIN THE CRUSADE IN PART 5 OF DOOMSDAY DAWN, “THE HEROES OF UNDARIN”

The Pathfinder Playtest continues to evolve with an ancestry rules update!

REDMOND, WASHINGTON (October 9, 2018): Paizo Inc. turned its attention today to “The Heroes of Undarin,” the fifth of seven scenarios in the Doomsday Dawn adventure in the worldwide, free Pathfinder Playtest. In this chapter, players create new hardy 12th-level characters who are accustomed to facing terrible foes in the Worldwound, a land ruined by demonic powers.

“A group of agents is sent deep into the Worldwound to uncover the secrets of the White Axiom. You are sent to protect them,” said Jason Bulmahn, Director of Game Design at Paizo, setting the scene. 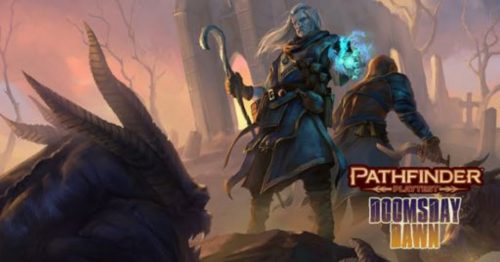 Throughout the playtest the Paizo design team has listened to players and made changes to the game, including modifications to core systems like proficiencies, difficulty classes, death, dying, skills, classes, and multiclassing archtypes. Today marks the release of Update 1.4, which delivers an overhaul of the ancestries. Starting with this update, when players make a character, they select not only an ancestry but also a heritage from within that ancestry. The heritage gives them additional physical characteristics based on their lineage, and choice of heritage is in addition to the ancestry feat that they gain at 1st level.

Bulmahn added, “The one thing we’ve heard mentioned over and over is that many of you felt like the ancestries weren’t quite giving enough at 1st level. We also saw a number of responses saying that taking a feat to be a half-elf or half-orc was too steep a price to pay. This update makes changes to the way that ancestries work, while also giving you some additional high-level ancestry feats to use in your game!”

In addition to surveys on Chapters 1 through 5 of Doomsday Dawn, there are now surveys up for Ancestries, Classes, Monsters, Hazards and the Rules as a whole. The playtest bundle, updates, and surveys are all free to download at PathfinderPlaytest.com.

Players can learn more, participate in forums, read blog posts and sign up for email updates on paizo.com. The Paizo Twitch channel (twitch.tv/officialpaizo) hosts live play every Thursday from 2-5 PM Pacific and discussions with the design team every Friday at 4 PM Pacific.