What is Descent into Midnight

At its heart, Descent into Midnight (DiM) is a game about community, family, and hope. It’s a tabletop roleplaying game that takes place in a technologically advanced aquatic civilization whose culture has never been touched by humanity. Bioengineering and psionic, or mental, powers allow the strange and varied species to communicate and interact with their surroundings no matter their physiology.

In the game, players take on the roles of guardians, defending their community from a physical, emotional, and even existential threat. The game focuses on the relationships between the guardians, the inhabitants they protect, and their internal struggles and dreams in the face of a corruption that threatens to change their world.

“The thing that we were building together was so hauntingly beautiful, that when something threatened to corrupt and destroy it, I felt it more viscerally than most experiences I’ve had throughout many years of playing and GM’ing games.” – Jason Robinson, UX Designer, host of The Secret Cellar Podcast

Unlike other RPGs, we have no canon setting for Descent into Midnight. Instead, we help players create the species they want to play, then work with the other players to weave their cultures and histories together to form a civilization that’s entirely unique to their table. Designed to welcome everyone, no matter their knowledge or understanding of our real-world oceans, Descent into Midnight guides you into a new and mysterious world, one that you and your friends help create.

“The way [the playbooks] guided me into the character creation was great and let me explore something that I didn’t think I would do on my own.” – Drew Corkill, UX Designer

Descent into Midnight uses the award-winning Powered by the Apocalypse (PbtA) system developed by Vincent and Meguey Baker and used in popular roleplaying games like Masks: A New Generation, Monsterhearts, and Headspace. PbtA is a story-focused system that incorporates the best of both narrative and mechanical gameplay. Though players familiar with other PbtA games will have a solid foundation with Descent into Midnight, we have developed the setting and mechanics to inspire your imagination to play in new and surprising ways.

“All of the things that you think you know about the world completely shift, and so the world building ends up happening on this level of continuous surprise. I don’t think it could ever get boring.“-DC, creator Mutants in the Night; Narrative Designer, Wizards of the Coast

Descent into Midnight has been in development for the past 3+ years and playtested by game designers, artists, podcasters, streamers, scientists, and con-goers around the world. We are finishing the final drafts of the project, but you can play the game using the Quick Start packet available right now. This campaign is to provide funds to bring you the best PDF and hard-copy versions of the game we can.

Descent into Midnight is a deeply personal project for us. Not only does it help us introduce players to the wonder, beauty, and terror of our real-world oceans, it works to build empathy in a way that is critically important to us as designers, and to the world we live in.

“It’s very spiritual and very emotional, yet you are playing things that don’t resemble you at all. It’s a fascinating exercise in empathy.” -Devon George, Descent into Midnight artist, www.devongeorgestudios.com 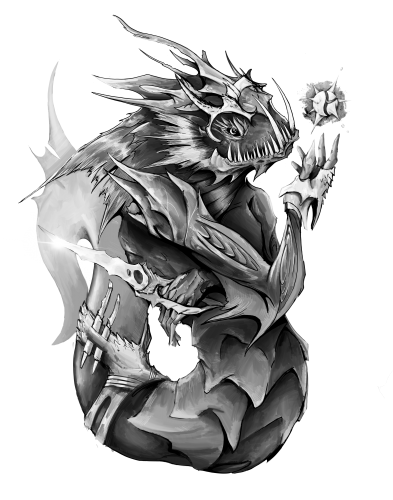 Instead of classes or point-buy systems, Descent into Midnight uses Playbooks to guide you through character creation and to weave your story into all the others at the table. Each playbook is written around a familiar trope, giving you a narrative anchor in this alien environment, and then uses leading questions and evocative language to seed your imagination with ideas.

Our playbooks are as much about what story you want to tell, as they are about what you do in the world.

The Empath – Emotions, memories, and experiences flow through you — both your own, and those of the inhabitants around you. At one time these energies overpowered you, pouring through the open door to your heart and mind. Now you have learned to ride the waves of emotion, flowing with and redirecting the anger, joy, fear, and corruption of others.

The Cultivator – Gardener, bioengineer, aquaformer. You coax and shape the world around you to serve your needs, sometimes at great personal cost. You nurture life and those around you, growing the tools you need to solve some problems, and giving of yourself what is necessary to solve the rest.

The Redeemed – You were created to excel at one thing: conflict. Whether through physical training, bioengineering, or psychic reprogramming, you are the center of the storm when challenges arise. Though your original purpose may have been to inflict terrible consequences on your enemies, the choice is now yours – are you a weapon of war, a symbol of peace, or something else entirely?

The Awakened – You were once like the rest of your kind. Then you woke up. Some believe the planet chose you, awakening your Echo to fight the corruption. Others worry you are a child of the Corruption, mutated to serve its ends. Yet something calls to you, from the Far Echo or the deep ocean. You were awakened for a purpose, if only you could find it.

The Orator – Ambassador, politician, commander, or community leader. Your words, presence, and experiences inspire your community to work miracles. When danger lies at your community’s doorstep, folks look to you for guidance. When people have disputes, they go to you to provide mediation. When the community needs a leader, you are there.

The Traveler – Where many lives thrive within and around the cityscape, you have spent years, perhaps even centuries, studying the world outside. Whether as scholar, trader, explorer, or bounty hunter, you have collected a lifetime of knowledge and experience, and seen the best and the worst the world has to offer.

The Muse – Crafters, sculptors, singers, and storytellers, you draw on the thoughts, hopes, and fears of your community and express them for all to see. The manifestations of your imagination exist beyond the physical world, weaving the essence of the Echo into physical expressions of beauty and emotion that live in two worlds, whether through a haunting song, a life-changing story, or an architectural wonder.

The Specialist – You are an expert at getting your allies into and out of dangerous or questionable situations with skill and grace, whether rescuing the victims of a natural disaster, negotiating a lethal hydrothermal vent field, breaching the biotech security of an ancient civilization, or extracting psychic information from a coral hive-mind.

The Seeker – The Far Echo calls to you, a current carrying you to the Echoes of other realities. Do you explore those realities for knowledge and insight, or do you draw on their strange perspectives to manipulate and control the inhabitants around you?

The Touchstone – Corruption can never extinguish the wonder of life as long as life maintains hope. True, deep, and genuine compassion can transform not just a single life, but the world in which it lives. You are the innocent that befriends the grotesque or abandoned; the ally that reminds those around them their unique gifts create a better world; the stable friend providing shelter against the crushing tide of despair. 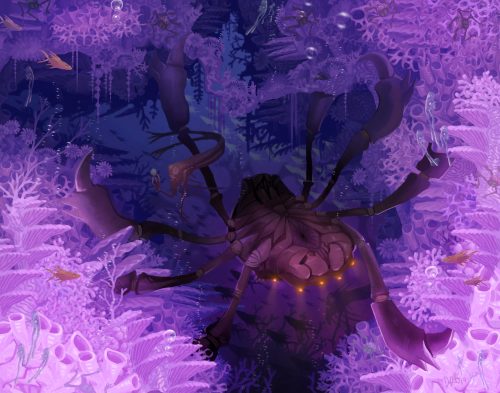 In a game where sapient krakens and microscopic krill can create a complex society, how strong or dextrous you are isn’t as important as the social, emotional, and existential impact of the actions you take. Descent into Midnight is a game about connections, so the statistics we use to describe your character describe your relationship to yourself, your team, and the people around you.

Hope – Are you a force of optimism and inspiration, or do you struggle with feelings of despair? Hope is the cornerstone of the Muse and Touchstone playbooks.

Altruism – Do you use your skills and abilities to support individuals around you, or do you struggle between your duties and your needs as an individual? Altruism is the cornerstone of the Empath and Cultivator playbooks.

Community – Are you deeply aware of how everyone in an ecology fits together and able to see from others perspectives, or is it difficult to work with others? Community is the cornerstone of the Orator and Seeker playbooks.

Calm – Are you focused and at peace during stressful times, or are you quick to react and easy to anger? Calm is the cornerstone of the Specialist and Redeemed playbooks.

Drive – Are you driven toward success and survival, or do you fold under pressure? Drive is the cornerstone of the Awakened and Traveler playbooks.

What Others Have Said:

“I’m gonna say, my game is really really good, but this game is ridiculous!” -DC (@DungeonCommandr), creator of Mutants in the Night; Narrative Designer, Wizards of the Coast (creators of D&D 5th Edition)

“It’s completely changed how I engage with my games and the people around my table.” -Aram Vartian, creator, editor, producer GodsFall and DemigodsFall

“Exploration without combat, co-op through building, not destroying. It allowed me to imagine a world outside our own perceptions. It was simultaneously a game and a meditation.” -@tembeep on Twitter, marine biologist, co-host @RSSDefiant

“DiM is the most strange, beautiful, and emotional games I have ever played. I will remember my first experience with it forever.” – Playtester @explosiverunes on Twitter

“The playbooks were built in such a way that failure and hardship were exciting and beautiful things, and I haven’t stopped thinking about it since.” -@kyle_krueger on Twitter, co-host @RSSDefiant

“I playtested DiM at GenCon and it was one of the defining moments I’ve had from ANY con.” -@billoftheforest on Twitter, Cast member @TalesfromtheGrim @DiceTribe

“The rumors are true. This game lives up to every expectation.” -@kwiksotic on Twitter, Cast Member #TheDyingKingdom @GreyhawkChannel

We are releasing additional quotes from game designers, podcasters, streamers, and playtesters daily @DiMRPG on Twitter if you’d like to see more. 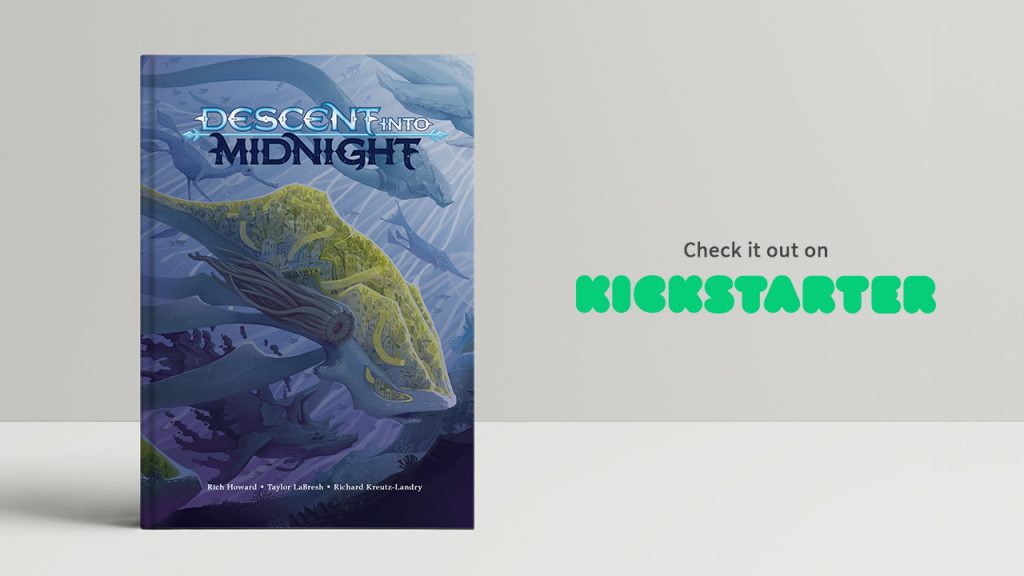 Our funding goal for this campaign is $30,000, which will allow us to produce the best quality copy of the game we can. That total includes paying our artists, the entire production team, web designer, Kickstarter, payments, accessibility and campaign consultants, and more. What it does not cover is payment to the designers.

Rich, Taylor, and Richard are not getting paid from the initial funding goal.

We will also be covering a part of shipping for all copies of the book. Backers will be charged $5 for domestic shipping per copy, and international backers $15, no matter where it is being shipped. We are going to cover any overages.

Egg Embry wrote comic book short stories, edited comic book series, wrote and drew a webcomic, and contributed to comic book journalism across the 2000s. Now, he buys the opportunity to write for a variety of tabletop role-playing games in the tradition of vanity press. NOTE: Articles may includes affiliate links. As a DriveThruRPG Affiliate/Amazon Associate/Humble Partner I earn from qualifying purchases.
View all posts by Egg Embry →
Tagged  Descent into Midnight, Kickstarter, Press Release.
Bookmark the permalink.