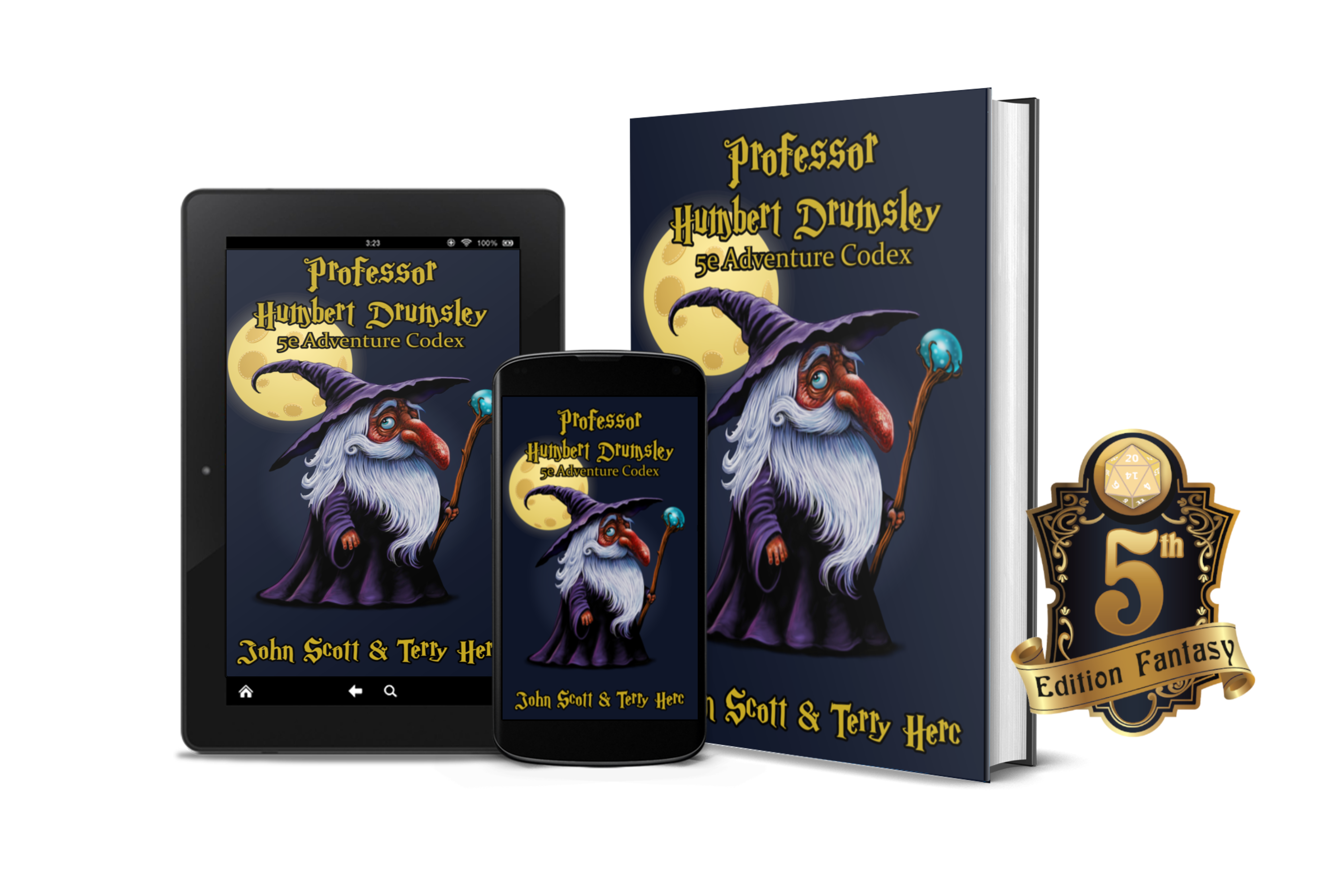 Since first publishing in 2017, Terry Herc has been producing supplements for 5th Edition Dungeons and Dragons on the DMs Guild. With a number of best selling products, Terry is bringing this experience to Kickstarter, along with John Scott as co-writer on their new book.

Professor Humbert Drumsley is filled with lore and short side treks, perfect for when characters are between major adventures and need something a bit lighter. Heavily influenced by Rincewind from Terry Pratchett’s Discworld and the Ice King in Adventuretime, you’ll find Humbert a humorous addition to any campaign.

“Our playtesters have really enjoyed Humbert,” said John. “They really caught on with the premise of him as a menace to the town. They’re not so much “questing” as they are in “damage control” mode.”

Some of the adventures in the Codex include Magic Items on the Loose, Ogre for Mayor, and Bats, Braziers, and Bugbears. One of the adventures, Oh, I Hate Spiders!, has already been released as a freebie on DriveThruRPG to help promote the campaign.

“We really wanted to get some great art in the book,” said Terry. “That’s why we’re using some amazing pieces by Rick Hershey of Fat Goblin Games and Jeremy Hart of Jeremy Hart Illos. Not only that, we’ve got Travis Legge of Aegis Studios lined up to do the layout, which is truly fantastic.”

The pledge options on the Kickstarter include the PDF, as well as print-on-demand softcover and hardcover options. There’s also an exclusive signed Collectors Editions, which includes a personalized message and free shipping to anywhere in the world. “We’re really excited to deliver our first printed book to backers,” said Terry. “Using DriveThruRPG’s print-on-demand service will help us get books out to our backers quickly.”

“We’ve got some really great stretch goals planned,” said John. “Not just Funding stretch goals, we’ve also got Social and Backer goals too. We’re also looking forward to engaging with our backers, some of our stretch goals will need their input.”

“We’re very excited to bring this to Kickstarter. With a little help from the roleplaying community, we can bring this book to life. And with some luck, we can smash through our stretch goals and make the finished book even bigger,” added Terry.