When Super-science, Metahumans, and magic come together the possibilities are limitless. Metahumans Rising allows you to create a rich comic inspired world uniquely your own. Design virtually any hero you can imagine. Play as individual heroes or create your own world-class super team, the Open Action System is designed for fast, creative play that rewards characters for their backgrounds, talents, and creativity. 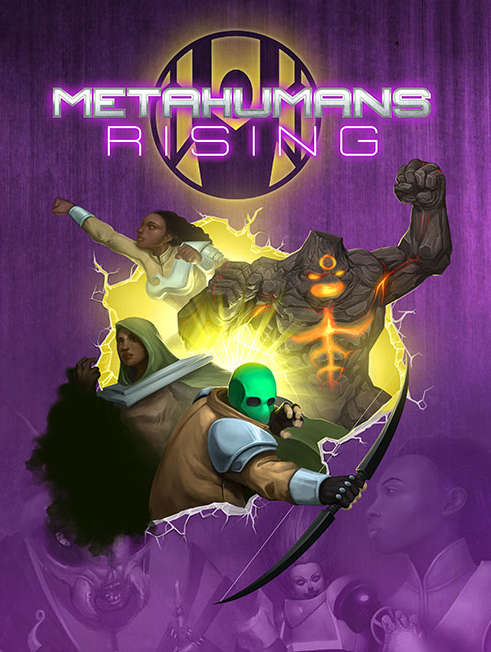 Build a shared super setting with guided collaborative world building and team origin, or jump into the action with the world of Metahumans Rising.

Create heroes with customizable arrays and flexible powers based on keywords, or pick from over 25 sample powers from absorption to water control, with hard light constructs and invulnerability in between.

Never feel limited to just what’s on the sheet as heroes push themselves beyond their limits with Willpower, a measure of one’s determination that grows as misfortunes mount and heroes struggle with their own motivations.

Easy to use rules for background characters and disasters allows GMs to create threats on the fly, from radioactive mutant gerbils to a tidal wave large enough to wipe out a country.

Find out about villainous organizations like Chimera, a genetic cult seeking to force start the next stage in human evolution, and the Bureau of Metahuman Affairs, a secretive arm of the US government tracking Metahuman activity worldwide.

Burning the Midnight Oil, an introductory adventure, gives you everything you need to get started, including: a story to help define a campaign city, a cadre of super villains known as the Brood and a sample starting super team, the Steel Aces.