December 17th, 2019 — Rich Thomas, founder and Creative Director of Onyx Path Publishing, announced the company launched the Kickstarter for Cults of the Blood Gods, a supplement for the Vampire: The Masquerade 5th Edition core rulebook.

Cults of the Blood Gods is a new style of sourcebook for Vampire: The Masquerade 5th Edition that introduces the pernicious horror of twisted beliefs. Designed for players and Storytellers, this supplement includes: 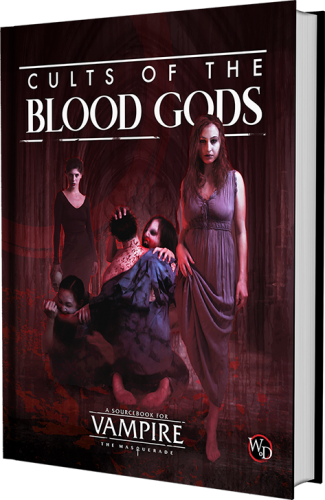 Founded in 2012, Onyx Path Publishing is a Pennsylvania-based company dedicated to the development of exemplary, immersive worlds. Working
with a group of amazingly talented creators, we explore print, electronic and other forms of media distribution to make our products available to our fans. With over 25 years of publishing experience from which to draw, we are industry professionals who love the art of the game and plan to continue making meaningful, innovative contributions in the years to come.

White Wolf Entertainment is a licensing company focused on creating the best participatory brands in the world. Since its original entry into the roleplaying game market in 1991, White Wolf’s World of Darkness has grown to be one of the most recognized and successful brands in the hobby game space with collective book sales in excess of 10 million copies during this time. White Wolf’s World of Darkness brands, which include Vampire: The Masquerade, Werewolf: The Apocalypse, Wraith: The Oblivion, and Orpheus, as well as other universes such as Exalted and Chronicles of Darkness, have been licensed for television series, video games, interactive media events, and a myriad of merchandise and other entertainment products.