Paizo publishes the daring second volume of the Against the Aeon Throne Adventure Path. 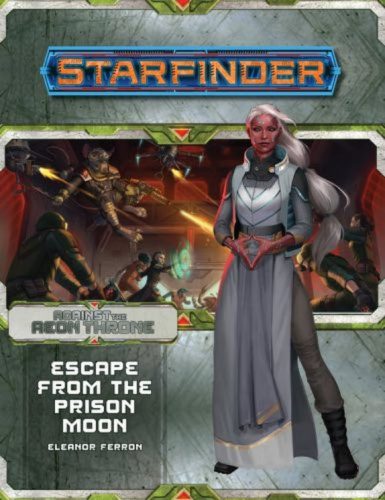 REDMOND, WASHINGTON (September 19, 2018): Paizo released “Escape from the Prison Moon,” a Starfinder science-fantasy adventure for 3rd-level characters, by Eleanor Ferron today. It is the second volume of the Against the Aeon Throne Adventure Path for the award-winning tabletop roleplaying game. It is available for $22.99 at paizo.com and local game stores on planet Earth.

Deputized by the interstellar police force known as the Stewards after freeing a colony from Azlanti occupation, the heroes journey to the Azlanti Star Empire to rescue their friend who is being held captive on a well-guarded prison moon. After visiting an outlaw space station nearby, the heroes stage a daring breakout under the nose of the penal colony’s warden. But the experimental starship drive is still out there, and the heroes must track it down to prevent the Azlanti from making it operational!

“A lot of great science fiction focuses on exploring the unknown, and I enjoyed writing an adventure where the PCs were forced to explore a dangerous universe that they knew very little about. I loved playing up the tension of what it felt like to be strangers in a strange land, where anyone could be a friend or a foe, and where the very buildings and machines that the PCs relied on weren’t necessarily built with the PCs in mind. I also like encounters that allow for multiple approaches, so I liked the open-ended infiltration aspect of this adventure—the PCs can choose how they want to interact with the people and challenges they encounter on their journey, but their choices may have wildly different consequences.” – Eleanor Ferron