PRESS RELEASE – STOP THE END OF THE WORLD IN THE FINAL CHAPTER OF DOOMSDAY DAWN, “WHEN THE STARS GO DARK”

STOP THE END OF THE WORLD IN THE FINAL CHAPTER OF DOOMSDAY DAWN, “WHEN THE STARS GO DARK”

Download the huge update to classes for the final chapter of the Pathfinder Playtest!

“When the Stars Go Dark” takes place in 4718 ar (the present). “Using the White Axiom and the Last Theorem, the heroes from Magnimar must do whatever it takes to stop the Doomsday Dawn,” said Jason Bulmahn, Director of Game Design at Paizo, introducing the scenario.

Today also marks the release of the absolutely huge Pathfinder Playtest Update 1.6, which adds or adjusts aspects of every class in the game! These changes range from a small alteration in stances that affects the fighter to major changes for the alchemist and paladin, and are just a fraction of what Paizo is doing behind the scenes to make the game even better. 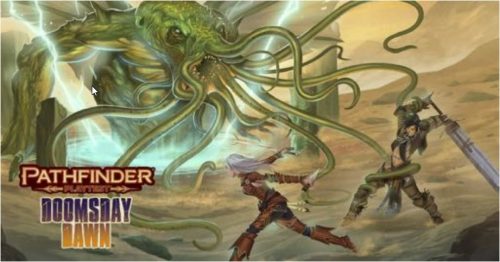 If players haven’t completed their run through the previous parts, they still have until the end of the year to play and tell Paizo what they think. Once they have wrapped up “When the Stars Go Dark,” they should make sure to complete the surveys and give the game designers their feedback on Part 7 of Doomsday Dawn!

The free playtest bundle, updates, alternate resonance system, Pathfinder Society playtest scenarios, surveys, and more can all be found at PathfinderPlaytest.com. Players can learn more about Pathfinder, participate in forums, read blog posts, and sign up for email updates at paizo.com.

Join the Pathfinder Playtest designers every Friday throughout the playtest on the Paizo Twitch Channel (twitch.tv/officialpaizo) to hear all about the process and chat directly with the team. The channel hosts live play every Thursday from 2–5 p.m. PST and discussions with the design team every Friday at 4 p.m. PST.