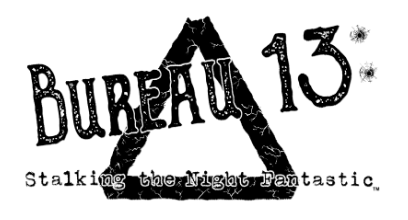 A “Jumpstart”, according the Shane Hensley of Pinnacle Entertainment Group (PEG), creators of the Savage Worlds Adventures Edition (SWADE) table-top role-playing game, is a “showcase the best of [Independent Licensed Publishers’] various worlds we’d share […] with our Kickstarter backers.” Each Jumpstart provides a glimpse into the Savage Worlds project being developed by the dozens of independent studios that have been licensed by PEG. There are currently over fifty “worlds” developing projects for SWADE. Per the rules, each portfolio must come with a fully-playable adventure using the SWADE core book and should represent the vision for the world.

TTL’s JumpStart includes an introduction to how to become a Bureau 13 “Agent”, stats on the 1970’s Colorado RV that Agents are given, the updated “Thing From Walnut Creek” adventure, six playable Agents, and other bits and pieces. Additionally, the Jumpstart features the full wrap-around cover created by award-winning author and artist Phil Foglio (Girl Genius).

Bureau 13: Stalking the Night Fantastic was created in 1982 by Richard Tucholka and won the 1991 Gamers Choice Award at GenCon. Before his passing, Tucholka produced several revisions to the game, but voiced a desire to take the world back to its “everyday people against the supernatural” roots. The Savage Worlds adaptation was commissioned by Tucholka’s estate and, two years ago, Longshot Productions (LSP) was contracted to oversee the project. The Bureau 13 JumpStart is the first glimpse into TTL’s new vision.

While a defunded government agency tasked with saving the world might not seem new to most, the LSP’s design team has taken the familiar and added new, modern twists to previously explored monsters, situations and weapons,  demonstrated by the monstrous ManFish (Don’t call them Fishmen!) that travel in packs of “bros” and can be calmed down by appealing to their vanity, or Agent Bill Taggert, a were-chinchilla, whose turn-ons are long hops in the mountains and dust baths (Turn-offs include silver and sudden loud noises.)