And a virus which threatens to turn people into machines… 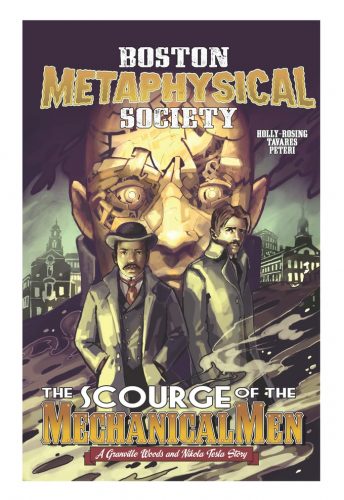 Boston Metaphysical – The Scourge of the Mechanical Men

Granville Woods and Tesla are in a race for time to save Boston from a mysterious disease that turns human beings into machines.

Granville returns home to Liberty Row only to find an almost insane Tesla hiding there. But his efforts to get rid of Tesla hit a snag when they discover that a virus is turning humans into soulless mechanical men. Realizing that Emily and Travis Morgan of Morgan Medicinals are behind the outbreak, they fear that the twins are after more than just control of Boston – They want to take over the Great States of America.

I interviewed Madeleine Holly-Rosing last year (which you can read here) where she mentioned that one of the next stories would focus on Granville and Tesla… and here you go! From her section on the page “The Story behind the Story”, it sounds like this started with a premise of getting two characters in the same place for an extended time and see how that worked out (and what might the writer learn about both characters in the process). It’s an amazing moment when that happens as a writer. When a character speaks to you and lets you know exactly where they would prefer you to go and how they would prefer to act. It makes writing them all the easier because it really does feel like they write themselves (and maybe they do).

It has been and always will be important to me to write characters who, though they come from diverse backgrounds and have different points of view, are able to work together for the common good. 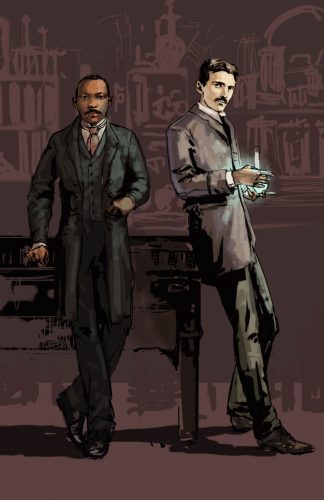 As this is a standalone story, you can pick it up on its own ($6 for the PDF and $10 for the print), but given the nature of Kickstarter you have that opportunity to play catch-up ($22 for the digital and $35 for print). At the higher levels, you have the opportunity to get drawn into the Granville and Tesla pinup in full period garb ($145). And if you are considering running a Kickstarter of your own you could opt for one of the Consultation packages which include reviews of your Kickstarter Homepage, phone conversation (plus all the goodies from the Kickstarter) ($225 for Economy Consultation and #350 for Premium Consultation). 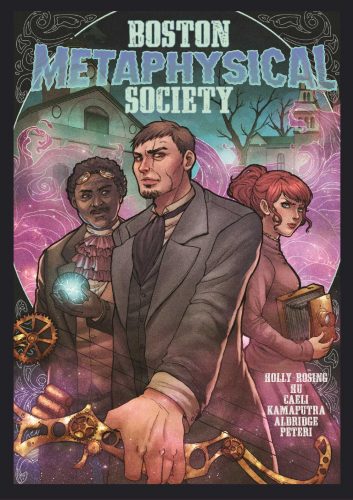 Obviously, if you have been there for a while, this becomes a no-brainer, but if you are just thinking about dipping your toes into the Boston Metaphysical Universe, this might be a good place to jump in and check it out.

To find out more about Boston Metaphysical Society, check them out here.

Writer of comics and novels. In 2006 his first short story "The God That Failed" was published by Terminus Media in their debut comic Evolution Book 1. Since that time he has had stories published in Terminus Media's Evolution Book 2 and Evolution Special, Kenzer and Company's The Knights of the Dinner Table, and Four J Publishing's The Burner #3. Currently he is eagerly awaiting the digital publishing of his first creator-owned comic The Gilded Age #1 to be published online as well as his first novel The Dark That Follows later this year.
View all posts by John McGuire →
Tagged  Boston Metaphysical Society, Gwynn Tavares, John McGuire, Kickstart the Comic, Kickstarter, Madeleine Holly-Rosing, Steampunk, Steampunk Friday, Troy Peteri.
Bookmark the permalink.