For me personally, this week was a GLORIOUS WEEK to be a sci-fi fan.

We got a new Star Wars: The Force Awakens trailer.

I picked up my copy of The City: A Cyberfunk Anthology, a book that I’m loving.

I’ll have the first draft of my short story set in the world of The Crossing ready to be sent off for edits soon, which will be submitted for this awesome anthology.

Before we jump into why I feel this day held so much significance for fans of one particular movie franchise known across the world, lets hop back into the ‘ole Delorean.

It was 1989 and I was living in Chicago. My mother had taken my brother, myself, and a few cousins to the theater to see Back To The Future II. I was a huge fan of the first movie, having killed our VHS copy of Back To The Future upon subsequent viewings (an act that would also occur with our copies of Hook and New Jack City. Weird combination, I know). 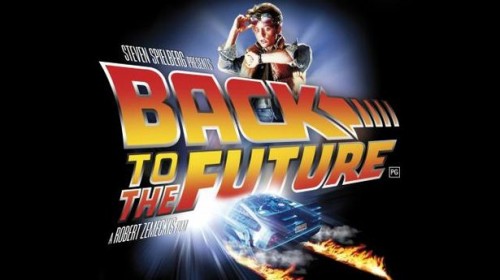 To say the first movie blew my mind was a huge understatement. You’ve got time travel. You’ve got great comedy. You’ve got the weirdest, awesomest (not a word, I know) buddy adventure pairing of Marty McFly (Michael J. Fox) and past/present Dr. Emmett Brown (Christopher Lloyd) that I don’t think has been matched since. There was a homicidal bully/ antagonist. Wrongs being righted. Timelines being changed. Crispin Glover in all of his manic weirdness. A skateboard chase sequence. Great acting. A solid story that just damn worked.

And one of the greatest ending’s to a movie ever.

And to think that there weren’t any immediate plans for a sequel, that the movie was just going to end on this huge cliffhanger, is mind boggling. As a kid, your brain just starts racing with the possibilities.

“No roads?” younger Robert said to himself as the credits rolled in the darkened living room.

“Means some serious ‘ish is about to go down.”

Ok, I wasn’t cursing at the age of 7, but you get the point.

So fast forward to 1989. Back To The Future II hits, and my 7 year old mind is just ready to be blown to bits.

Once again you’ve got McFly and Doc Brown (who just work so darn well with each other). Cripsin Glover is gone, replaced by some dude in bad old person make up. The homicidal Tannen family are still around. Time travel. Doubles. Action. Adventure. More time travel. 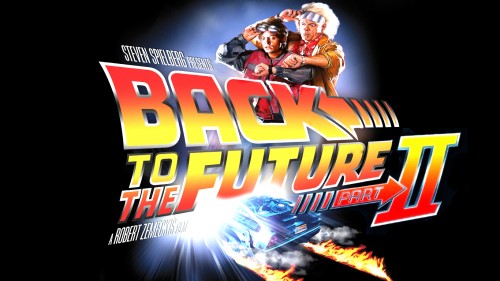 And here’s where it gets crazy.

You’ve got a wacked out version of the future. 10-21-15. There was a time when anytime maybe, 30 years plus ahead in the future was seen as possibly being this crazy foreign period where things would be extremely outlandish.

Back To The Future II wasn’t an exception. You had flying cars. Interactive 3D movie ads. Crazy fashion styles. Video phone calls (yeah, not too crazy now with things like Face Time and Skype). And hoverboards. 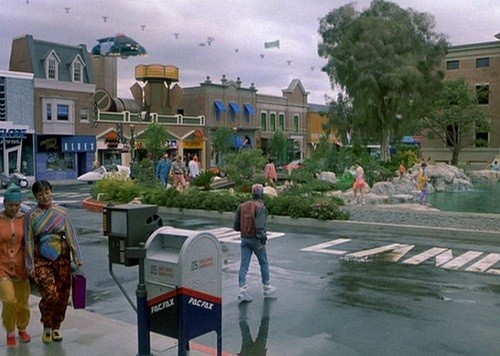 As a kid seeing all of this, and with later viewings, it was a fun peek into what could be. Seeing Marty rolling around on his Mattel  branded hoverboard was awesome, and had all of us debating if some shadowy government program had created this technology in the real world.

We were kids. Don’t be too harsh.

The flying cars were great. I wanted Marty’s self-lacing Nike’s and blow dry jacket then and there. Griff Tannen and his height growing abilities was crazy. Duck Hunt being seen as a golden oldie of the video game era was a fun nod to the Nintendo games we were then playing. And the Cubs had won the World Series.

As a kid, this is what I appreciated the most. The more visceral, fun nods to what the future could possibly bring.

The movie also ends with a teaser for the third installment that was being filmed shortly after the second movie was completed. As a kid, to have a guaranteed movie coming down the line was a fun surprise, as it confirmed we’d be seeing more of Marty and Doc’s cinematic escapades.

In this day and age where such end credit teasers are common place with big budget movies, Back To The Future II was the first time I’d experienced this. Marty and Doc in the Wild West?

Take my mother’s money, because she was going to be the one paying for that shindig.

Upon subsequent viewings, as I got older, other things started to stand out.

First and foremost, I think this would have been the first time I’d been introduced to the idea of alternate timelines. Sure there were things like Days of Future Past before, and any host of other sci-fi TV shows, and films that dealt with this idea, but this was the first time I’d experienced the concept firsthand. 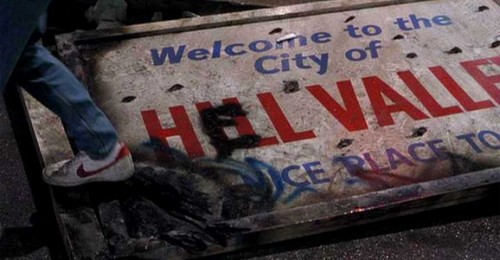 When Doc Brown broke down how old Biff stealing the Grays Sports Almanac created Hell Valley (please see the movie for further explanation if you haven’t seen it) was just mind blowing as a kid, but appreciated for a cool storytelling tool as I got older. The idea that one man’s selfish pursuit of wealth destroyed the idyllic town of Hill Valley creates a dark tone for the flick , providing a counter balance to the whimsical adventure that we’d been experiencing before. And this alternate timeline confirmed for me that the Tannen’s are a group of murdering psychopaths. 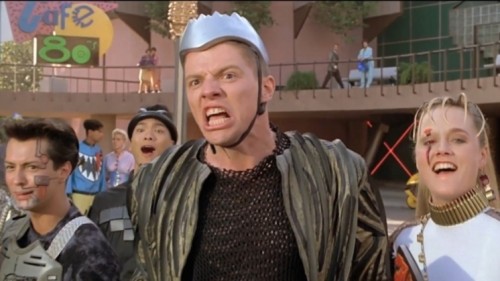 Another idea that continues to resonate with me is that as much as you might think you’re laying the foundations for a successful future, that’s not always going to be the case.

Case in point: where future Marty’s life winds up. He’s working a crappy job, his dreams of being a professional guitarist are out the window. His family life is kind of blah, and rather than try to rebuild what’s fallen around him, he continues to make bad decisions based on some crappy sense of bravado.

Now that I think about it, where did dude’s obessession with being called a chicken come from? That was totally out of left field.

Not saying that all of our lives have a tendency to turn bad or horrible, it was just interesting to see that the screenwriters sought to show that everything wasn’t so peachy keen in the McFly household. Remember, Doc’s whole reasoning to come back was to save Marty’s son from going to jail, which led to a downward spiral in regards to the McFly family. For a sci-fi adventure you could say such a concept being introduced was as Marty would say “Heavy”.

The same could be said for the horrible direction that Biff takes with his greed filled run of murder and gambling. Biff chooses to be an opportunistic ass, who leaves nothing but pain and misery in his wake. And he accepts this, and revels in it, creating the hellish alternate timeline Marty and Doc head towards.

I know it’s a stretch to think that B2FII (as it’s known to all the cool kids) might have something to say on life decisions. But often we find that science-fiction can be used to speak to our personal experiences. Heck, I know as I get older, that as much as I may want to move things in a certain direction, that’s not always going to be the case, try as I might. But if I don’t at least try, then nothing will happen.

The thing to realize is even though the chips may not fall where you want them to, you still have opportunities to make those decisions. As long as you at least try. Roads less traveled and all that jazz.

I know I’m jumping movies a bit, but I feel the final scene from Back To The Future III sum’s this up perfectly: 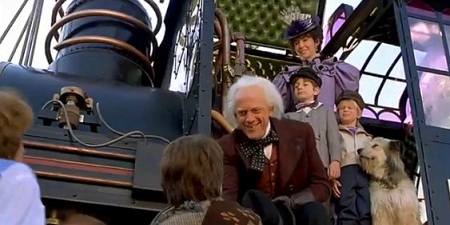 Jennifer Parker: Dr. Brown, I brought this note back from the future and – now it’s erased.

Jennifer Parker: But what does that mean?

Doc: It means your future hasn’t been written yet. No one’s has. Your future is whatever you make it. So make it a good one, both of you.

Marty McFly: [Marty wraps his arm around Jennifer] We will, Doc.

That scene always gets me on that ‘ole sappy emotion level.

So to round things out, I’ll go on the record and say this is my favorite movie trilogy of all time.

Watch this movie. Heck, watch the trilogy in a binge session and just enjoy some good cinema. Happy post October 21, 2015/ Back To The Future II day. 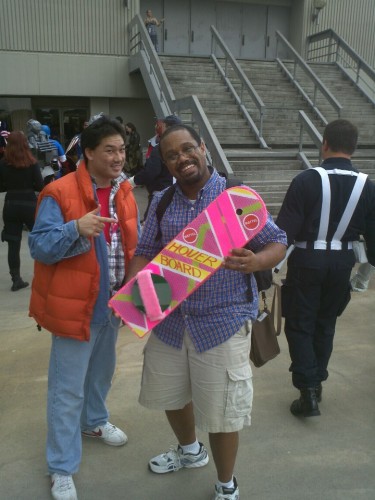 I almost ran off with this hoverboard.
But that probably would’ve screwed up my future timeline.