Jack was kind enough to take a few minutes and let me pester him with questions. 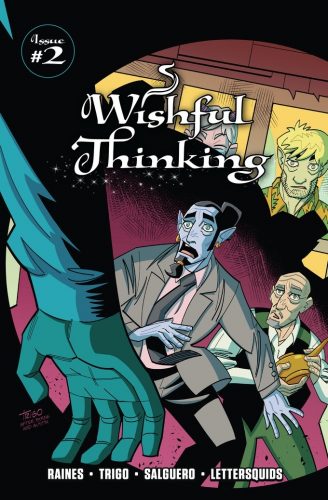 At what point did you sit down and think “I want to be a comic writer?”?

When I was a senior in high school I finally got my license. It was during the same year I learned my small southern town had a comic shop! I hadn’t read a comic in years, at the time I was more interested in manga just cause it was more available online at the time. So when I stepped into my LCS for the first time I was greeted with a wealth of cape comics (superhero comics are my FAVORITE), most notably Mark Waid’s Daredevil, Scott Snyders Batman, and Matt Fractions Hawkeye. Their ability to weave imagery with narrative made it hard to put those books down. When I learned Scott Snyder would be in Charolette for HeroesCon I just had to go.
There I met so many creators both professional and independent that were more welcoming than I could believe. Everyone was so down to Earth and there to showcase/talk about what they loved. It was then I learned that anyone could be in this business, and that’s when I started practicing turning my story ideas into comic form.

I’m a big fan of all those comics, too! And Mark Waid’s run on The Flash is by far and away my favorite run on the character. Who inspires you? Or do you have a favorite writer/artist or creator?

Scott Snyder has been both my favorite creator and biggest inspiration. Everything connects in these wild stories he puts out in such a complete way, all while being a total class act with his readers!

It’s hard, especially now that I’ve started working 3rd shift and going to school. My biggest key to success is writing down a list of things to do each day. I try to go for 4 things max, and plan my week accordingly. I have a white board next to my desk for this purpose. If it’s been written down I get a sense of satisfaction from crossing it out, and it keeps me from feeling overwhelmed. Doubt I could do what I do without a calendar of some sorts!

I do much the same thing with my to do tasks, but sadly the thing that probably is the hardest to figure out is promotion. It’s often difficult to get word out about independent comics. What do you do to market and promote your books? Anything work really well or really poorly?

Social media is tough for me. I’m moreso a lurker than anything else so it’s been a challenge getting myself out there. So far my biggest success social media-wise has been on Instagram, but even then it’s hard to fight against the algorithm to get the word out there. My mailing list has been the best and my most favorite way to connect with readers. It feels more personal which allows me to write more about what these projects mean to me as well as what I’m up to.

Little of column A and a little of column B. Often my story can change depending on how the pages look. I like leaving character appearance to the artist’s discretion. I’ll write about their personality and demeanor, then it’ll be up to Trigo to handle the rest. When seeing how he frames each panel and designs these characters I find new avenues to take the story. So even if I am a few issues ahead I usually end up rewriting it by the time we get there.  The collaboration between my crew (Carlos, Ester, and Justin) makes writing fresh and exciting! 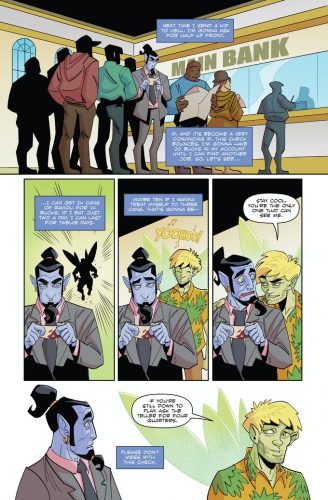 Thank you! I was introduced to urban fantasy through The Dresden Files. It’s really fun to think of how fantasy creatures would interact with our society. I knew that I wanted my story to be under the same genre, but didn’t know the specifics.
I then began thinking about what I wanted to write about. What kind of feeling did I want to convey? During the time of Wishful Thinkings’ inception, I was around 23, working as a custodian, and not having a solid idea of how I wanted to tackle my goals. I didn’t have much of a grasp on myself either, so the thing I wanted to write about most was identity. It was something everyone struggles with, and I wanted to personify that conflict through comic form.
Around that time I caught wind of a 6-page story contest. The top 3 would get looked at by an editor from some indie publisher (it’s been too long I can’t remember!). I’m not entirely sure what I was looking at when I came up with this, but I remember thinking of how if a djinn was a human it’d be Jim. Why would a genie need a human name? Well, I guess if he wasn’t a genie anymore. What would he do if he wasn’t a genie? Probably the only thing he knows how to do, help with wishes. When I told my buddy this he gave me the name for Jim’s business, Wishful Thinking, and the rest was history.

So far I’ve heard nothing but compliments!  This project has been in development for 3 years, and seeing that work pay off in the form of satisfied readers has been a blessing. It makes all the stress worth it lemme tell ya! This issue dives more into the fantasy side of things and is a bit of a bigger story than the first one. Very curious on how it’ll be received!

Definitely identity, as it’s still something I’m figuring out.  It’s a thing everyone must go through on their own, and can only be found with complete honesty of one’s self. I think Wishful Thinking and my webcomic, Spectre Protector (illustrated by Sarah Burgess) talk of different methods of searching for that identity.

You ran your first Kickstarter for issue #1 and funded. I’m interested in the idea that you weren’t using the Kickstarter to fund the comic but instead used it to “introduce” yourself to the greater comic community. Do you feel like you succeeded in that goal?

Yes, I believe it did a good job. It definitely exceeded my expectations for my first Kickstarter! I tried to play it as safe as possible so that I can just get used to running a campaign.
I intend to carry that energy through future Kickstarters. In my opinion, it’s only to fair to fund as much of the book myself before going to Kickstarter. I want you to know this is a story I believe is worth telling! It also helps speed up the fulfillment process which is a plus. 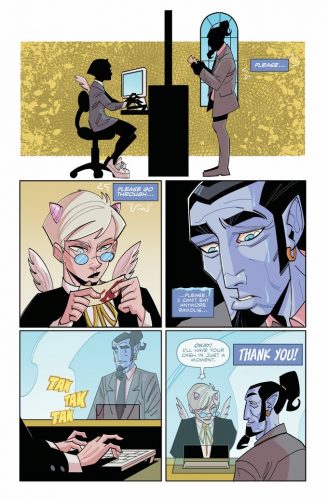 I’ve found that the difference between having the book done or still waiting on the book to finish after the Kickstarter can be stressful, so I’m going to try and have any future issues done before then. Now that you’ve just launched your second issue on Kickstarter, what have you learned about the process of Kickstarter? Something that afterward you “wished” you knew?

The biggest thing I learned was the process of shipping these books out. I haven’t heard any complaints about damages or packages that never showed up so I’m glad all was well on that front. It was pretty nerve-wracking, but now that I’ve done it once I feel more comfortable with all that’s involved in shipping, and now that I know all the steps I can better plan out how to go about them without any need for stressful crunch time.

What’s the overall plan with Wishful Thinking? Do you have an overall target for the number of issues?

I’m shooting for 7 issues, each one being roughly 32-36 pages long. I have other stories to tell in this world, and if it continues to gain support I wouldn’t mind diving into that. For now though 7 issues is the plan!

Comics is an amazing collaborative medium. Tell me a little about working with Carlos Trigo, the artist on Wishful Thinking.

He’s been amazing throughout the whole process! I tend to give my artists a lot of space in the design department (the only character I’ve been picky on is Jim), and he’s given new light to each character he touches. For instance, the bank teller in this story doesn’t have a name. I just refer to her as Teller given that she’s just a side character. Actually, she used to be a he until Carlos suggested otherwise. After seeing what he’s done with the teller and how her personality comes alive in the panels I was inspired to write her a bigger role in the next issue! His experience has helped greatly when it came to refining how I structure my panels. I feel with each new issue I grow a bit more as a writer thanks to his, Ester, and Justins collaborative efforts.

Honestly, I don’t have anything to tell 16-year-old Jack. Maybe ask if we can switch places? All he had to do was play video games and go to school. No bills no nothin…lucky dog.

Anything else that you’d like people to know about you (Hobbies? Passions? Favorite TV Show)?

Unfortunately, I don’t have much time for them now, but I do really love fighting games. That community has the same vibe as comics. I ran an online tournament with a friend called Bapmasters and met so many cool people! That lead me to go to Chicago to see a tournament live, it was an amazing experience. I’m not too good at them (yet) but I love figuring them out.
Other than that I’m into the gym and hiking. Both are great ways to clear my head. I would recommend either of them to anyone going through a tough time right now. I promise getting your body moving will provide some excellent mental results! Especially when you see physical improvements.

Thanks for taking the time to answer my questions. Where’s the best place to find out more about Wishful Thinking and maybe any other projects you have in the pipeline?

The best place would be my email list! During campaign times I try to post once a week. Non-campaign times every other week. That’s if you want to see progress on my work. If you just want to chat with me feel free to find me on twitter @mysticmike8 or instagram @zach_brains.
I have a webcomic that’s free to read titled Spectre Protector. It’s about a ghost named Vera accidentally becoming the superpowers to a high schooler named Liam. Link is below!
https://tapas.io/series/Spectre-Protector/
Jack Raines is a comic book writer based in Greenville SC. When he’s not writing stories such as Wishful Thinking or Spectre Protector, you can find him writing mile-long notes trying to understand networking.
***
Thanks again, Jack! You can check out Jack Raines latest Kickstarter for Wishful Thinking #2 right here! 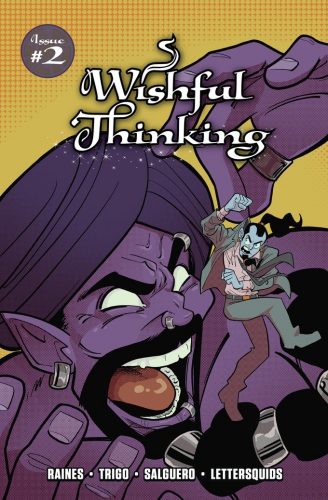 ***
Also, just a reminder that my newest book, The Echo Effect is newly released and only $0.99 for the first week! Check it out here!
***