Normally that would mean that the machine is on its way to replacing the worker. The more efficient machine outlasting the fragile human.

How about a story where the human isn’t going to give up his dreams, his goals, or anything else for a damn machine… 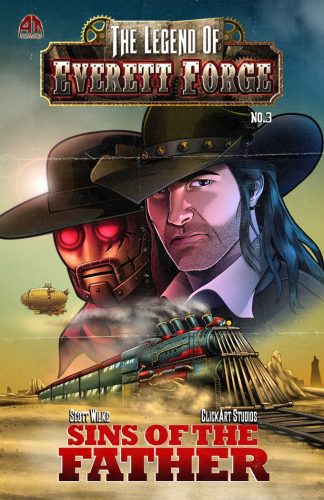 The Legend of Everett Forge: Issue #3

The Legend of Everett Forge is a Steampunk/Weird West tale set in an alternate 1889 where Machines control the American West. The story follows infamous outlaw, Everett Forge, as he ventures deep into the Machine Territory in search of vengeance!

SINS OF THE FATHER picks up right after the events of Issue #2. After a brutal showdown with the Angel of Death, Everett Forge finds himself aboard a mysterious airship. Meanwhile, in the heart of the Machine Territory, Omega is hard at work bringing his evil plans to fruition.

Here’s the deal – Steampunk to me is all about that Wild West (Weird West) meets steam tech. It is about man versus machine. It is about revenge and vengeance and old grudges and new problems. Bounty Hunters and gunfights with weapons a bit more powerful than you might find in a regular western.

The Legend of Everett Forge hits those sweet spots in this ongoing battle between “good” and “evil”. But much like any good western, those words don’t always mean that the good guy is anywhere near squeaky clean!

As this is the third issue of the series, the lower levels allow you to get this newest one to add to your collection ($5 Digital/$10 Print). At the $25 level you can completely catch up on the print comics. At the higher end ($100), you can not only get the comics and posters and stickers but also get a poker chip as well as digital copies of the Godsend comic book (to complete your collection).

Do you like Weird Westerns? Do you like Steampunk? Are you hoping for some potential shootouts between Everett and all sorts of Machine Enemies?

Yeah, maybe this book is for you… 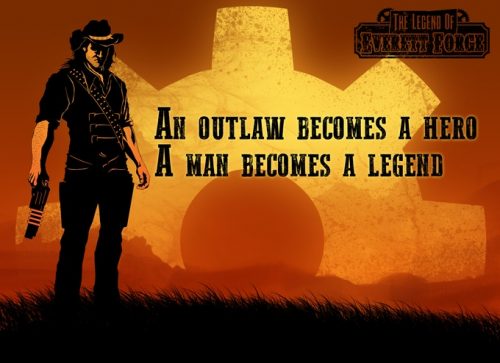 To find out more about The Legend of Everett Forge, check out the Kickstarter Page here.

I’m a sucker for the Western genre. Anytime they cross my tv, I end up stopping on that channel to watch. And Heaven help my poor wife if the word Tombstone is mentioned anywhere in there. She might as well give up on me being productive for the rest of the day (even though I own the DVD). 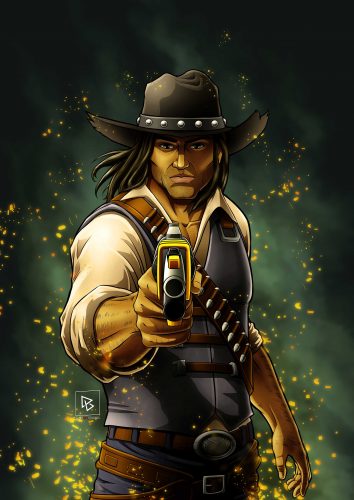 I’ve been working in comics since about 2014, that’s when I officially started work on The Legend of Everett Forge.

At what point did you sit down to become a writer? Do you remember the first thing you drew/wrote?

I’ve been writing for as long as I can remember. I was super into Goosebumps when I was a kid, so the very first stories I wrote were all lighthearted, scary ones.

So many people. Family inspires me to continue pursuing my dreams. And the list of creators out there who inspire me is way too long. I’m just extremely fortunate to be surrounded by so many amazing, loving, and talented people.

Writing is my 10 to 2 for sure. It’s a tough thing trying to balance family life and my creative work. I don’t want to sacrifice any time with my wife and daughter, so I will write while they’re at the grocery store, visiting family, or when they’re asleep. 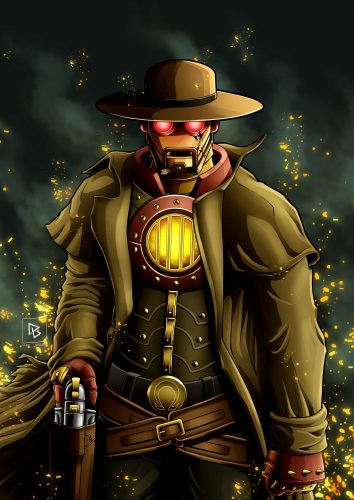 With essentially no budget, I stick to the cheap and easy social media methods like Facebook and Instagram. I’m fortunate enough to be friends with a lot of indie creators who help get the word out about my comic as well. Kickstarter, in my opinion, works the best. It’s an amazing platform to get your work out to thousands of people from across the globe. From just two Kickstarters, my readership has expanded over a couple hundred. That is pretty solid for a new indie title.

I always start with a general outline. I don’t get too detailed with it as I’ve come to find that often times the story will tell you how it wants to be told. For example, in the second issue, I wrote and re-wrote a couple pages over and over again because they just weren’t coming out the way I outlined them. Then I realized that the way I was writing them was way more organic than what the outline had. Sometimes, as a writer, you have to give a little of the control over to the story.

What inspired you to create The Legend of Everett Forge?

I always say I wish my inspiration was deeper and more meaningful…but, to be honest, I just wanted a story that had robot cowboys! A college professor once told me that if you can’t find the stories you want to read, write them yourself. So, that’s what I did! 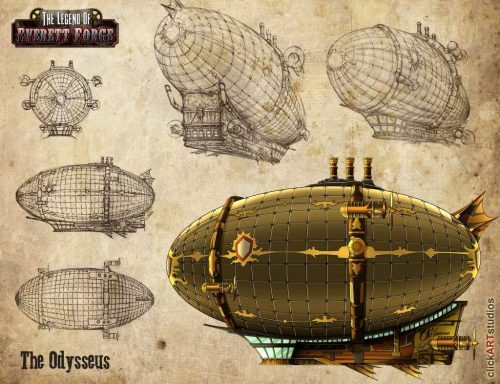 Well, it all initially began with me wanting to see robot cowboys. Then in high school, I wrote a short story about an unnamed gunslinger who has to fight his way out of an old west town full of robots. The story ended up lost somewhere in my hard drive until I came across it a few years later in college. I was minoring in Film Production, so I decided I wanted to expand on it and turn it into a screenplay. I worked on that for about a year or so, on and off. After I finished it, I shelved it again. It wasn’t until a couple years later, after I attended one of my first Comic Cons, that I decided I wanted to revisit the story again in comic book form. And here we are!

So far, so good! Reactions from the Steampunk community regarding the comic have been extremely positive. Even those who aren’t big into either Steampunk or Westerns have enjoyed it. But, I think my favorite reactions are from the people who typically aren’t into comics. I have one reader who hadn’t read a comic in over 20 years, but after he saw my first Kickstarter, he decided to pledge and now he’s one of our biggest fans.

Oh, and just a few weeks ago someone shared one of our posts and said they want to cosplay as one of the characters from the story.

I don’t think you can get a bigger compliment than that!

I seem to always be drawn to stories about death, vengeance, or humanity. I love exploring all three. Fortunately, The Legend of Everett Forge focuses heavily on all of those in varying ways.

Networking and expanding my fan base have proven instrumental in hitting our goals. My very first Kickstarter failed miserably. I only had a few pages of the comic done by that point, I had only started my facebook page maybe three or four months prior, and I knew very few people in the industry. After the Kickstarter flopped, I sat down, licked my wounds, and started to put myself out there more. Within a year I had become close friends with dozens of indie creators and more than doubled my fan base. 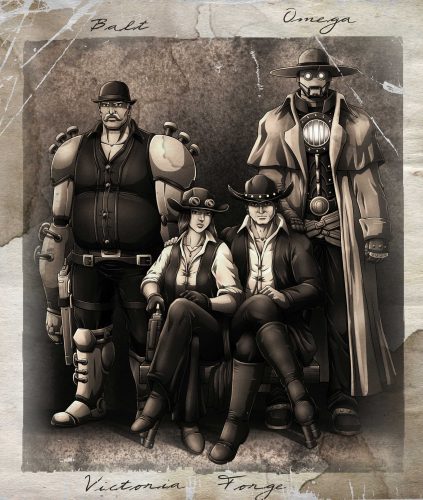 Yeah, the second issue should be out in about a month or so. The initial story arc for Forge will run seven issues. After that, I have two additional story arcs for him that will close out the entire saga. If I’m lucky, I’ll be able to tell the tale of Everett Forge for the next ten years!

Comics is an amazing collaborative medium. Tell me a little about ClickArt Studios.

They’re the best! Back in 2014 when I was looking for an art team, I posted an ad on DeviantArt. Rai responded almost immediately and showed me their work and stated that he and his wife Ochie were big Steampunk fans. I knew almost instantly that they were the ones I wanted to work with. Then the concept art started coming in, and suddenly these characters that had been in my head for years started to come to life in ways I could have never imagined!

They’re all such amazingly talented and kind people! I love working with them and I just love them in general. I hope to have a very long career with them!

I’d tell my younger self not to wait to pursue his dream. I spent so many years thinking I wasn’t ready or doubting that anyone would even want to read my work. Had I spent all that time actually getting my stuff out there, I’d be light years ahead of where I am now. 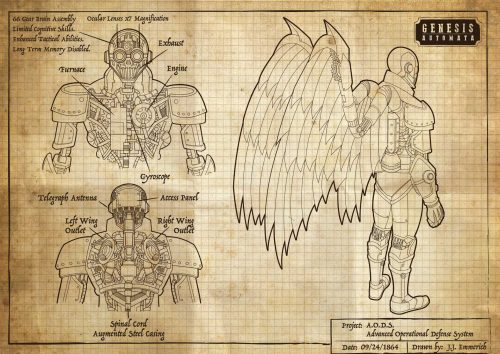 I’m currently working on a new comic series with Godsend creator, Lee Jiles. It’s called Red Scare. It’s still in its early stages, but so far it is looking great. I’m also working on a pitch for a superhero story. Other than that, I enjoy playing video games and reading comics. I love spending time with my family. My favorite TV Show is Westworld. Shocking, right?! 😛

Where’s the best place to find out more about The Legend of Everett Forge and the rest of your works?

I want to thank Scott Wilke for being so gracious with his time!