The War against Clickbait 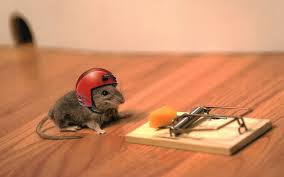 “When you see what happens next, your jaw will drop!”

“You won’t believe what she’s wearing! Or what happens next!”

“Refi your mortgage and get a FREE Miley Cyrus blowup sex doll!”

You’ve seen these before. You know what I’m talking about. You’re surfing to Amazon to buy my latest book, but there are just too many distractions. Ten thousand mousetraps filled with Kim Kardashian-shaped cheese lie between you and your objective. Fall into any of these click-holes (Not Clickhole, the awesome parody site) and you’ve pretty much fucked over the internet for the day.

You just had to see Miley’s boobs, didn’t you?

You needed to find out how to lose thirty pounds in twelve seconds.

The list of top ten ways to kill your husband was irresistible.

Truth is; every time you follow one of these links, you give an asshole money. Spend 30 clicks in an ad-riddled article, and a dickwad spammer gets richer. Follow some stupid link on Upworthy you only sorta kinda cared about in the first place, and the douches win. And when you’re feeling particularly sadistic and you share clickbait on Facebook or Twitter…congratulations…you just spread feces all over your friends.

If you see a picture of someone famous with a quote attributed to them, that person probably didn’t say that thing. It’s made up, and the site the pic links to is usually bullshit. It’s clickbait.

When you see a link claiming your jaw will drop, your panties will fall off, or you won’t believe what happens next, it’s crap. Click the link, and the only thing that’ll drop will be your IQ. Clickbait.

See all those little links at the bottom of the boring article you just read on CNN? All of them, clickbait.

Every time you share a meme about being a drunken housewife or take a quiz that tells the world how much you know about Star Wars, you’re being a clickbait slave. The assholes just got richer.

And if the grammar is shitty, it’s clickbait. The article was probably written in a spam-farm in Kazakhstan. (Though if it’s only slightly crappily-spelled, there’s also a chance you’re just on CNN, Fox, or Huffpost…)

The thing is; the people who create this crap content are getting better at it. They’ve figured out what headers you’ll ignore. They’re stepping up their game. If you’re gonna avoid clickbait, you need to get better. And you need to do it quickly.

So let’s take a test. In the list below, three of the headers are from clickbait sites, and three are either legitimate articles or parodies. Answers are all the way at the bottom. If you get even one wrong, you’re obviously a terrible person and you probably flood your social media feeds with misspelled memes about being a likeable but mentally-deranged alcoholic. But seriously. Take the test.

1. Going The Extra Mile: This Heroic Ambulance Driver Drove For An Extra 2 Hours To Find A Hospital With 4.5 Stars On Yelp

2. When these Nigerians are asked what their country is like, their answers come easily.

4. Baby Sheep walks on the back of Adult

5.  This Teen Died After A 911 Dispatcher Hung Up On A Caller Who Swore At Him

6. Man Races Against Time To Take Out Trash Bag With Widening Puncture

– Scroll to the end to get the answers –

Look, we all probably realize that by clicking and sharing a few bullshit articles with weak content, we’re not exactly committing mass murder. If a few shady people rack up a few pennies for our foolishness, it’s not the end of the world. But life is short, and if we’re gonna make genuine use of our leisure time, maybe we’d all get more out of it by not falling down the rabbit-holes the web has laid for us. Maybe we should visit sites populated with real content, shit that’ll make us laugh, or at least elicit something other than a profound roll of our eyes.

I mean, there’s tons of cool stuff out there. Like here and here. And if you love really dark stuff, here.

Join us in the war against clickbait.

Only 2 of the 6 headers are non-clickbait. I checked out the other 4 and found them to have pathetic, meek, and/or bullshit content.

The other 2 are parodies.

None of the headers are for legitimate articles.

If you figured out my trick and guessed the 4 clickbait articles, congrats; your training is complete.

Headers 1 and 6 are parody articles. Both are pretty funny, and both are designed to mock clickbait content.

Headers 2, 3, 4, and 5 are complete clickbait. Complete with shallow content, specious factoids, and tons of links to more trash.

Like Loading...
Tagged  Bad Memes, Cat Posters, OMG Becky Look at her, What happens next, You won't believe, Your Jaw will drop.
Bookmark the permalink.