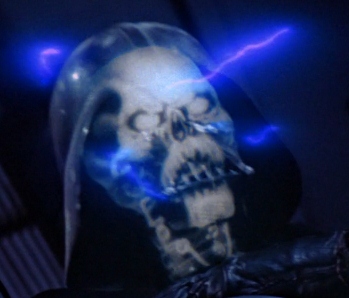 But while being x-rayed by the Emperor probably hurts, it also makes for a perfect skull…

…and a perfect lead-in to Part II of my new What if…? series.

Last week I What if’d The Lord of the Rings, and what it would’ve been like had I written it as a dark fantasy. This week I’m jumping over to film. To Star Wars. To the original three movies. A New Hope, The Empire Strikes Back, and so forth. Yes, I know it’s heresy. Deal with it.

So…what if? What if, instead of George Lucas’s sometimes fantastical, ocassionally sci-fi (ish), and oftentimes made-for-kids space drama, F’n J Edward Neill stepped in with total creative control? What if I’d fashioned all three movies into a deep, dark, end-of-the-universe, not-at-all-for-kids series?

Well…what if? How would I remake one of the most beloved series of all time into a thick, soupy, shadowy epic?

First up: the bad guys. I demand more competence, more lethality. From the ground up, I’d reinvent the Stormtroopers. Gone would be the slow, bumbling, easily-confused cannon fodder. Dark Stormtroopers would come complete with 500% more terror, skill, and slavish devotion to their purpose (murdering rebels). Instead of nice, clean, shiny…and entirely useless white armor, I’d pack them in matte black. Their armor would amplify speed, aiming, and strength. They’d hurl wookies aside like rag dolls, pick rebels apart with terrifying precision, and sweep through ships like locusts. I was never afraid of the Stormtroopers, not even as a child. But I wanted to be.

An effective way to cast a deeper shadow across any story, especially a sci-fi space drama: give the villains superior weapons. And I don’t just mean bigger guns, scarier costumes, and huger numbers. I mean truly terrifying technology. Red lasers, big ships, and tractor beams are all well and good, but I want to feel a true sense of dread when the bad guys slow down to approach a planet. Give me Star Destroyers launching millions of explosive nano-projectiles. Give me Stormtroopers firing silent, invisible death rays. Give me good guy x-wings not bursting into flames when shot (wouldn’t happen in space anyway) but falling quietly to pieces when Tie Fighters roll up behind them and launch volleys of death particles. Any villain worth his salt (aka Darth Vader) should have a plethora of ways to annihilate his foes. In Dark Star Wars, even one tiny little Imperial ship would scare the shit out of a planet packed with helpless good guys.

Darth Vader: Chokes out dozens at a time using the Force. Who needs Dark Stormtroopers when you’ve got a Sith lord capable of slaying ships’ entire crews from afar?

Death Star: Doesn’t blow up planets or blast ships to smithereens, but kills all living things with a big invisible death ray (silent death for everyone!)

Perhaps blurred in the fantastical-ish nature of Star Wars are the horrors of extreme technological advancement. Imagine if you will the sheer amount of labor (likely slave labor) and economic sacrifice needed to build a Star Destroyer, a herd of Imperial Walkers, or two Death Stars. To darken up the series, I want everyone to pay the price of building the Empire’s army. Entire planets stripped of resources: Check. Vast automated space stations manned by droids and guarded by ship-killing probes: Check. Star systems enslaved: Check. Alien species wiped out due to inefficiency: Check and mate. The Empire’s truest evil is not in wanting to kill rebels, but in creating the conditions that make the rebels want to rebel in the first place. Compelling my dark reimagining of the series is a vision of galactic-scale misery. I want us to hate the Empire like never before.

And lastly, it has always been one of my contentions that  good guys get off too easy. In modern movies and books, it seems (aside from Game of Thrones) that most if not all protagonists survive their ordeals despite hurling themselves into danger again and again. In my darker, graver vision for Star Wars, the good guys suffer more. In Cloud City, C3P0 meets his doom. He doesn’t get to come back after being blasted by imperial agents, but gets reprocessed with the rest of the junk droids, perhaps even being hacked to provide the Empire with information. And then there’s Lando. In Return of the Jedi, Han foretells the destruction of the Millenium Falcon (piloted by Lando against the second Death Star) but once again fate intervenes and the MF survives. Let’s darken it up. Lando and the Falcon get caught in the big explosion, and Han sees his ship plummet to Endor’s surface in ruin. And Luke. Poor Luke. In J Edward’s What if…? version, he dies with his father in the Death Star. Much like I needed Frodo to perish in tragic fashion with the One Ring, Luke needs to make the ultimate sacrifice. Leia gets to be the last Jedi hopeful…ever.

Blasphemous enough for you?

Join me next week when I reimagine Harry Potter’s Voldemort as an agent of Cthulu. No, I’m not serious. Or am I…?