The point of this series – a play review for Cubicle 7’s Adventures in Middle-earth for 5e – has been covered here, making my character, a Hobbit Scholar, has been discussed here, the character backstories ran here, and John McGuire shares the backstory for his character, Finn of Gondor, here, so with this column let’s get into the first meeting, the first job, and the first Journey where I discuss some of the Journey mechanics that AiME adds to the existing Dungeons & Dragons 5th edition system (labeled “FIRST JOURNEY” if you wish to skip ahead).

Our Loremaster is Mike and our fellowship consists of: 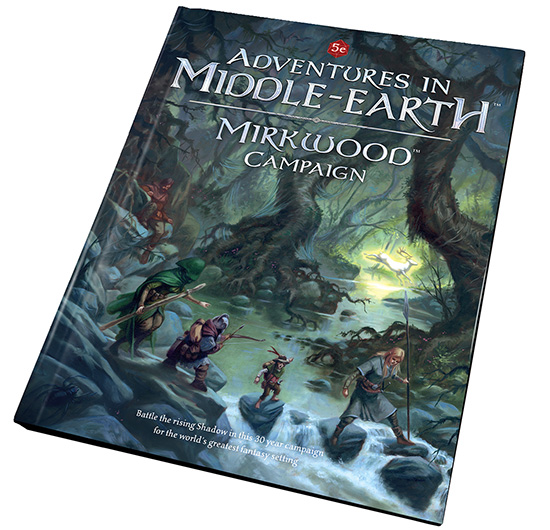 Despite using this image, the journey we’re on is from the mind of our Loremaster, Mike, and not taken from Cubicle 7’s work.

The story opens five years after the Battle of the Five Armies with our characters, largely unknown to each other, arrived in Esgaroth (Lake-town) for various reasons when Mike (Loremaster/DM) has Gwynn enter the inn. The cliche start to any campaign.

To understand the dynamic of this scene let me share that we’re playing online via Google Hangouts. Upon entering the busy serving room, Gwynnestri spots Kort, the mute dwarf that saved her life. She goes over to “speak” to him when the challenge of playing a mute character online comes up. If you’ve ever had a speech delayed, or mute, individual in your life, you know that communication is paying attention to subtle, and not so subtle, body language. To Stephen’s credit, he worked to create Kort in that space. However, what would be easy to bounce off of and react to if we were playing around a table becomes a concentration challenge online. Until you click on his window at the bottom of the screen, Hangouts cycles around to whoever is talking, which is not the mute character. If you don’t have his screen up, you lose the nuance of his performance and small moments when his character is “speaking”. However, keeping his window up all of the time means you lose out on the visuals of the other players and, especially, the Loremaster who screen shares maps to help with visualizing the settings. It’s a minor issue, but an impact to our play.

If you’ve roleplayed or written a novel/script before, you know that first scene, that first interaction, really sets the tone of your character. Rebecca decided to play Gwynnestri like no elf in Tolkien’s world, instead playing a take-no-guff heavy in the vain of a non-evil version of Marton Csokas’ Quinn from Into the Badlands (a show she’s never seen), or Stephen Amell’s season one Green Arrow from Arrow (not the Oliver character, but the violence-is-solution Arrow). Why did she go that route? Stick with me on this, my dice rolls for D&D combat can be summed up in the term, “apocalyptic”. As I’ve hinted, if my character had an oar, he’d miss water in the ocean. Prior to this campaign, every time Rebecca played a D&D character, it was a butcher. Lowest result? 19 with max damage. You know that player, they don’t participate in group combat, instead they lead the slaughter of wings of great wyrms while the rest of the party stays out of their way. My rolls are bad, but her rolls are the counter, they’re amazing. As such, she can play the violent hero because the dice let her stand tall. 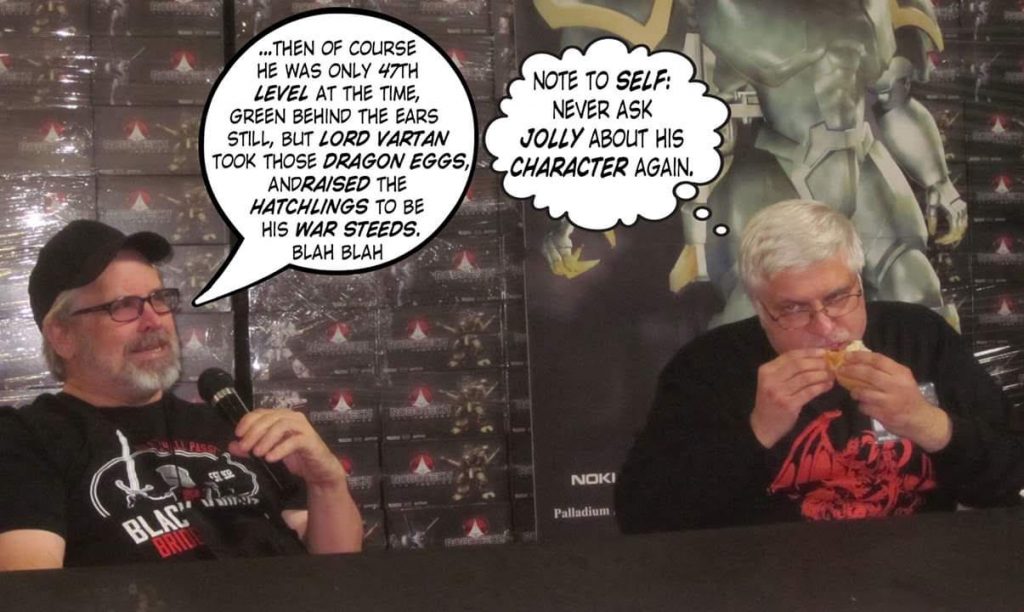 Rebecca and I played a D&D Adventure League game at Momo Con 2018. We were both 1st level but half of the group (8ish players) were 4th level and the encounters were a bit heavier for us. I, of course, missed everything. Rebecca was playing a 1st level halfling rogue. Her rogue killed… half or three-quarters of the monsters we encountered by herself. The 4th level characters had to defer to her. My session was: “Hey, this is my third CRIT failure in a row… I’m out of weapons to break or drop…” Her session was: “… and you rolled *another* NAT 20! With max damage! That’s another dead lizardfolk! There’s only a dozen left, do you want to charge by yourself or wait for the other players to join the fight? You’ll charge on ahead? Ok. Oh, another NAT 20. Should we just roll damage for fun?”

END INTERLUDE (Hopefully the relevance of the above Jolly/Kevin meme is clear.)

Back to surly Gwynnestri meeting mute Kort. It was the first scene of the campaign and one character is meant to be angry, the other quiet, and the scene was dying like casting Tyler Mane’s Sabertooth as Hamlet talking to Teller (of Penn &…) as Yorick. To save it, Mike interjected Robgud Clarfield, Hobbit, who I’d decided to assign a terrible English drawl. The accent I’m affecting is like someone based their English-English on the early punk singing voice of Billie Joe Armstrong when he was influenced by Brit punk but still from California. Shortest individual in the room, I play Rob as the sun rising in the morning on a world of good possibilities. While my counterparts… do not. So there’s a third Shakespearean character and it’s like English Pee Wee Herman. It turns out, that combination of characters was not meant to have deep philosophical talks so the deus ex machina… er, nobleman’s agent enters to offer us a chance to apply for a job.

NOTE: I should have stated this earlier, this is an original campaign and NOT a pre-made module. This is all from the head of our Loremaster, Mike. So, despite using the Mirkwood Campaign image above, this is not taken from that (so far as I know. I haven’t read the campaign book so I can approach this fresh).

We arrive at the noble home of Lord Haldeer. During the job offer we meet, and are paired with, Finn of Gondor, John’s character, a quiet 17-year-old done up in armor. The lord asks us to travel to Sadaphsan to search his ancestral family castle for heirlooms so he might learn more of his family’s history and why they moved from there to Lake-town hundreds of years gone by. We’re offered 1,000 silver pennies (is that a lot in AiME? I cannot say… yet) each for a trek of 150 to 175 miles. In terms of hooks, it’s not as hokey as finding a map leading to a dungeon and treasure, but it’s close. We pack a month-and-a-half’s worth of supplies and head out from Esgaroth along the river into Mirkwood.

Our first Journey is from Lake-town to the Hall of the Elven King of Mirkwood to gain said King’s permission to travel through the whole of said realm to the foothills to the north. If you’ve read the Adventures in Middle-earth rules, you’ll know that a big difference between Dungeons & Dragons 5e and AiME is the Journey System. Unlike 5e, AiME has a specific set of phases for travel. These phases, and a change to the Long Rest system that we’ll cover in another post, create a palatable difference between 5e and AiME. In a Journey, there are four jobs that must be done during travel – Guide, Hunter, Look-out, and Scout – that have to be filled and rolled for at different points during the trip. We assigned the roles as follows:

Thus begins the first Journey. The Loremaster determines the Journey’s Peril Rating based on how difficult the terrain should be. Then the Guide (my character) rolls a d12 plus modifiers against the Embarkation Table. I rolled the maximum, which was a red letter day for me! We got Auspicious Beginnings, which made the journey easy. As well, we received a bonus on our next roll for the Journey Events Table, and Advantage on our first roll once we encountered something related to said table.

For the Journey Events Table, the Loremaster rolls a d12 and adds modifiers. In this case, we reached the middle result, The Wonders of Middle-earth, which gave us a chance to remove a level or Exhaustion or gain one. However, since the journey had been light, this had no impact on us. That said, we rolled well and gained a +1 to our Guide’s Arrival Roll.

For our encounter, we ran into an elven guard. Gwynn, being the elf, was put forward to talk to him. She did and then rolled her Persuasion with Advantage. The result was high and the elven guard turned out to be Adabeuond, who was Gwynnestri’s friend, and he guided us right in where we saw the majesty of the elven realm. No exhaustion, no problems.

Regardless, our first Journey was complete. Using AiME’s Journey rules was a smashing success to the point that we had no idea what we were in for with the second Journey. Just none at all… [Next Friday]

Cubicle 7 is taking pre-orders for Adventures in Middle-earth – Bree-land Region Guide + PDF on there site (here). As soon as you order, you get the PDF.

Read my anti-clickbait clickbait article: “Everything We Know About the LORD OF THE RINGS Prequel So Far“! Guaranteed to be clickbait-tastic!