Kickstart the Comic – Quest for the Last Tree

Plus, should I ever run a Kickstarter for The Gilded Age, maybe I can see what worked or what didn’t work and apply those lessons. 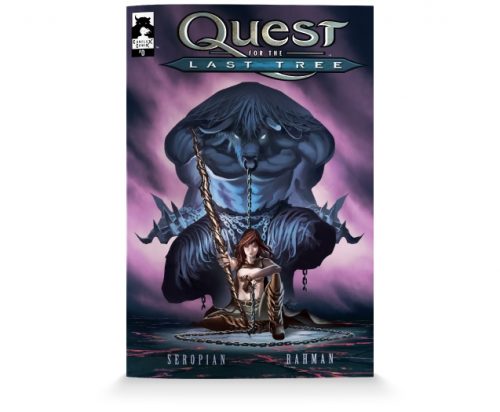 Cover to Issue #0 by Noor Rahman

Quest for the Last Tree

QUEST FOR THE LAST TREE issues #1 and #2 introduce a unique pair of heroes: Lucine and Asterion. She’s a teenage warrior priestess who shines with light. He’s a very hungry minotaur who lurks in the shadows. Together, they’re a “beauty & the beast” team like nothing you’ve seen before!

A thousand years from now, Earth is shrouded in eternal darkness: an endless winter’s night. In this post-apocalyptic future where science and sorcery meet, a girl named Lucine grows up in a hidden monastery, home to a sisterhood of women dedicated to the service of the goddess Gaia. Trained from childhood to become a warrior priestess, Lucine comes of age and travels to a far off village to take her first lover. There she falls for the wolfishly handsome Moki, who seems to be kind – but in this savage world, can any man be trusted?

Egg Embry and I always lament that there aren’t more fantasy comics out there. Growing up on the Dungeons and Dragons cartoons and then the various Dragonlance or Forgotten Realms books… it was always a little odd that the genre didn’t cross over into the comic book format more often. So here’s a ready to read fantasy style story, so we’re part of the way there.

The kicker (forgive the pun) is that they have the first seven (7!) pages of issue #1 to try out. This is a wonderful idea, as so many times the backers don’t always know exactly what to expect from the actual story being presented. Here the preview shows much of Lucine’s backstory, from being raised in the monastery to receiving her Mark of Sisterhood.

The thing is, you can have a great story, but if the artwork doesn’t feel right or just doesn’t match, then it doesn’t much matter.

Lucky then that Noor Rahman is extremely skilled in the art department. And showing me those pages only helps to reinforce that aspect.

But who am I kidding here? You had me at a girl and her Minotaur. 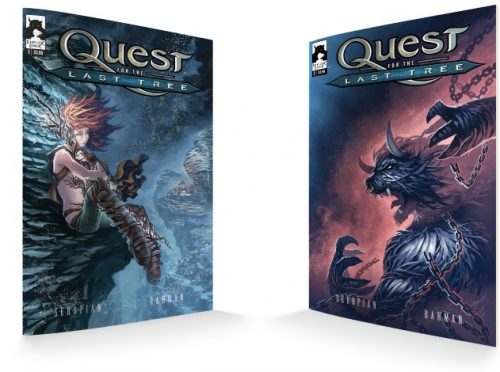 From the small amount of research that I did, it appears earlier this year issue #1 came out, so with the $5 first level (normally a “Thank You” level) you not only get the Thank You, but also a PDF of that issue. At $10 you get digital versions of both issues. Print versions of both appear at the $25 level.

One interesting idea mixed into their rewards is the Kickstarter exclusive issue #0, which is a fancy way to give us a combo print copy of the first 2 issues, an all-new cover, and 8 additional pages of concept art. I know many people who back projects love things that are exclusive, as it let’s them feel even more a part of the process (and let’s the creators provide them with something that is fairly unique to that particular moment in time as another kind of thanks). This seems like a slam-dunk idea here. It shows up in the $50 level.

Looking over their unlocked stretch goals, they include a pdf of issue #0 for everyone at the $10 level and up and signed print copies.

The only locked stretch goal is to Meet the Makers (available to those backers of $100 or more), which allows offers a 30-minute video conference with at least one of the creators (and possibly both).

I only wish I’d found this one a few days earlier as we are closing in on the last day. Lucky for me, they are above their original goal of $6,050 and on their way to funded.

This is a obvious “Yes” for me.

For more information on Quest for the Last Tree, check out their website here.

Writer of comics and novels. In 2006 his first short story "The God That Failed" was published by Terminus Media in their debut comic Evolution Book 1. Since that time he has had stories published in Terminus Media's Evolution Book 2 and Evolution Special, Kenzer and Company's The Knights of the Dinner Table, and Four J Publishing's The Burner #3. Currently he is eagerly awaiting the digital publishing of his first creator-owned comic The Gilded Age #1 to be published online as well as his first novel The Dark That Follows later this year.
View all posts by John McGuire →
Tagged  Conflux Comix, David Seropian, John McGuire, Kickstart the Comic, Kickstarter, Noor Rahman, Quest for the Last Tree.
Bookmark the permalink.