4.16.2019 – Atlanta, GA
Today Reign Dragon Press launched its second Kickstarter following on the success of the DIRGEzine kickstarter in February & March of this year. 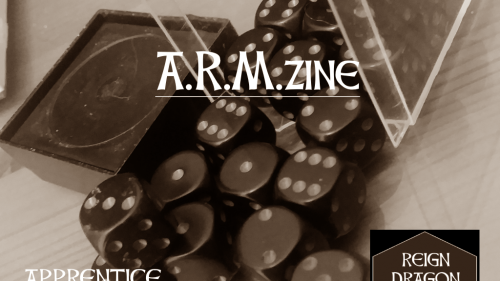 ARMzine or the Apprentice Role-playing Manual is an rpg/fanzine designed to be a fun way to teach kids (of all ages) how to play AND run role-playing games, without the need for traditional call backs or social barriers to entry. ARMzine is being design with a simple D6 + Skill, fail forward philosophy where success is team building and creativity, not necessarily how many bad guys you bulldozed. Random charts provide the Game Master and their crew (players) with tools to generate completely random adventures, including genre, setting, and the weirdness factors.

ARMzine is setting and genre neutral. This means that one does not need a particular knowledge of either history or RPG traditions to play or run ARMzine inspired games. The cool traditions will be baked in and the unneeded baggage will be left out.  In addition, as many kids will be rounded up to playtest ARMzine as we can find. It won’t be adults talking down to kids; the kids will have a say in how the game is designed.

Become one of the backers for this great idea! Head on over to Kickstarter and put your support behind ARMzine!