Legendary and professional game designers, writers and artists fill a forbidden library with magic and wonder. 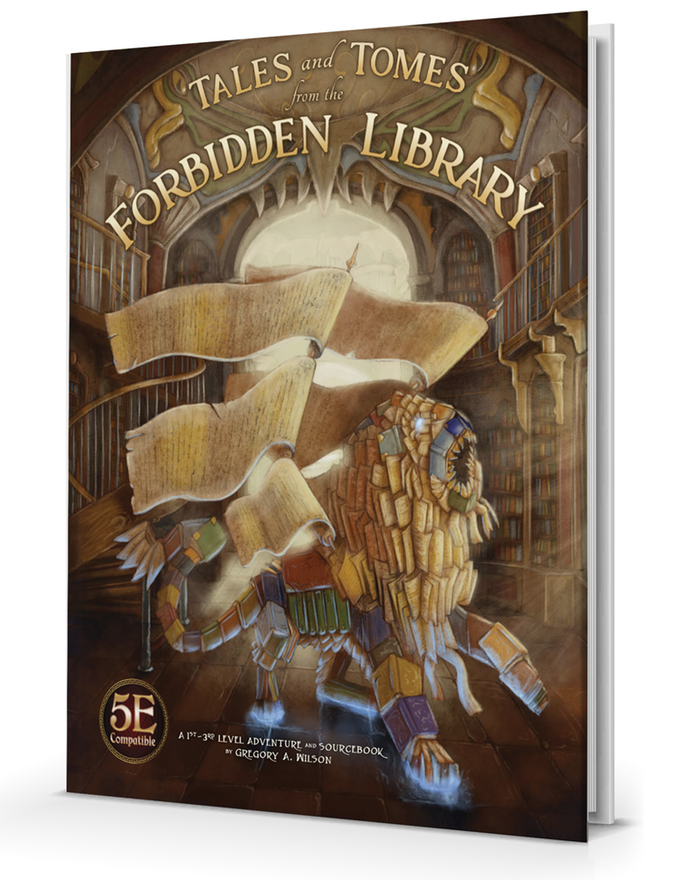 Fort Lauderdale, Fla., March 21, 2019 – Alligator Alley Entertainment teams up with Gregory A. Wilson to kickstart Tales and Tomes from the Forbidden Library, which will feature game designers such as Ed Greenwood, Ken Hite, Will Hindmarch, Shawn Merwin, and many others along with great contributing fiction authors like Cat Rambo to make an evocative adventure series and sourcebook filled with poems, art and danger!

Tales and Tomes is a 5E compatible adventure designed to lead heroes up to level 3 into the Eastern Wing of Hearthglow Academy’s Library, a forbidden place to students and teachers alike. Prominent SFF authors and tabletop gaming professionals bring the library alive with spell grimoires, weaponry manuals, atlases and bestiaries. Among the clues, the heroes will find scraps of lore, stories, paintings – and everything in between.

Even better, as the Kickstarter grows, additional collaborators will be brought in to create even more of the library’s fantastical catalogue. Still early in the first week of the Kickstarter, the project is almost halfway funded with stretch goals already planned.

Brian Dalrymple, co-founder of Alligator Alley Entertainment, says, “We are thrilled to be working with Gregory and all of the great talent that are ready to fill Hearthglow Academy’s Library with great content a GM can use in both the adventure and their own home campaigns. We want players to be both excited and a little nervous when they see their own GM pull out the Tales and Tomes.”

“I’ve been running this adventure as a live audience event for a couple of years now at the GenCon Writer’s Symposium and my players love it,” says Gregory A Wilson, genre writer and author of theForbidden Library adventure. “This year, we’ll finish the trilogy, and our Kickstarter supporters will be able to follow along and even run the adventure at home. After running Alligator Alley’s Esper Genesis content on my Twitch stream, I can’t wait to see what they come up with to supplement this volume.”

You can find the Kickstarter here and you can contact our media rep., Robert Adducci, here.

Premier game master, Twitch TV channel host (ArvanEleron), speculative fiction author, podcaster, and college professor, Wilson has been bringing the world’s favorite RPG to over 5,000 people week after week on Twitch. He also runs popular live RPG events at GenCon’s Writer’s Symposium, all of which serve as the inspiration for the world of Tales and Tomes from the Forbidden Library. In the world of fantasy fiction, Greg’s first fantasy novel, The Third Sign, came out in 2009, followed by the graphic novel, Icarus, in 2016; his third novel, Grayshade (Book One of The Gray Assassin Trilogy), also arrived in 2016 from The Ed Greenwood Group.

Founded by hobby industry veterans Rich Lescouflair, Eric Wiener and Brian Dalrymple, AAE brings a world of imagination to go along with their RPG products. The team’s skill set covers years of game design, retail expertise and print production.  The ENnie-nominated company has created  hits like Esper Genesis: Heroic Sci-Fi Role-playingTM with  5E rules, Witch Hunter: The Invisible World of swashbuckling adventure and horror, and The Demonbane Chronicles, a 5E adventure series set on the shattered continent of Sereth.

Egg Embry wrote comic book short stories, edited comic book series, wrote and drew a webcomic, and contributed to comic book journalism across the 2000s. Now, he buys the opportunity to write for a variety of tabletop role-playing games in the tradition of vanity press. NOTE: Articles may includes affiliate links. As a DriveThruRPG Affiliate/Amazon Associate/Humble Partner I earn from qualifying purchases.
View all posts by Egg Embry →
Tagged  Alligator Alley Entertainment, Kickstarter, Press Release, Tales and Tomes from the Forbidden Library.
Bookmark the permalink.