Unicorn Motorcycle Games presents One Child’s Heart, a tabletop roleplaying game about empathy, hope, and human connection in the face of childhood crisis.

In this game, players take on the roles of child welfare professionals, such as psychiatrists, social workers, and therapists, who enter the memories of traumatized children to help them reframe moments of distress and teach them resiliency. These memories are a chance to forge real human connections and make someone suffering feel less alone. 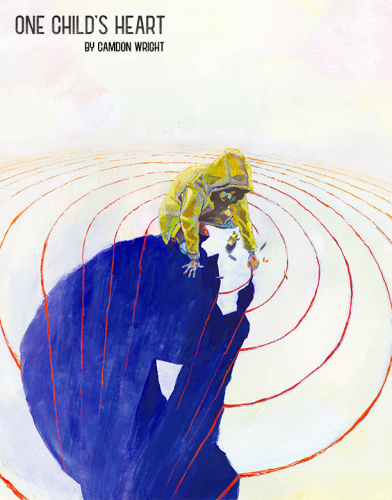 As the professionals move from memory to memory, the game’s difficult can lower as they work as a team to leave the child with the tools they’ll need to face the world. Every time they make a connection with the child, the professionals gain a therapeutic token. If they gain enough throughout the memories, they’ll leave a lasting impact on the child and help the child become more resilient.

The game is about compassion, human connection, and hope. It’s a game that focuses on moments where just asking if someone is okay can help that person feel less alone. It teaches the value of empathy, of listening, and of reaching out even when you don’t know what to say. Most importantly, it shows us that a loving, willing person can give someone suffering the gift of hope.

It is not a game about witnessing horrific abuse. It’s a game about trauma and resiliency. The memories being explored are about those smaller, quieter moments that from the outside might not seem like such a big deal, but because of the life the child has lived leading up to that moment, their perception of the world has changed. The game is about supporting someone in those moments.

One Child’s Heart was designed by Camdon Wright. Camdon Wright (he/him) is a game designer who passionately loves playing pretend, telling stories, and creating spaces for marginalized voices. Besides being known for being a staff writer at the ENnie award winning blog Gnome Stew and the Diversity Coordinator for the Indie Game Developers Network (IGDN). He’s the owner of Unicorn Motorcycle Games, co-host of the Misdirected Mark Podcast, and proud father of two amazing kids. Some of his incredible work includes the 200-word RPG Secret Person of Color and the game Madness and Desire. You can find him hiding behind a typewriter with a brilliant idea, playing pretend at various conventions, or holding loving conversations with those who need a friend.

When I played, Camdon introduced us to Kelly, the child we would have the opportunity to try to help. She was strong and in pain. She had lost her mother, and was growing up in the foster care system. Kelly was challenged by life and what it hadn’t given her. Camdon told us this particular girl would only be in this one game. There was no game over for her, no respawning to try again. No one else could be her knight in shining armor that next time. We three and our fumbling attempts to help were going to have a lasting impact. In the way choices each of us makes each day, to try to be there for one another. We leave impacts, leave scars. And we can offer hope. Kelly found a thread to hang onto in our game. She connected with a teacher. Found something with meaning to her, creativity and art. She became a teacher herself, extending the helping hand she’d been given to others. Kelly challenges me to live up to her model. To remember that each moment we can give or be there for another is a moment we can never get back if it is squandered.

Play One Child’s Heart and let it change you. Camdon guides us to learn, witness and open our own hearts for the better. “

“I loved playing One Child’s Heart. It’s the kind of game that lingers with you long, long after you play it and it’s a genuinely moving experience.”

“It’s a really real emotional palette that this game works with and it does so in a way that’s really subtle. A way that doesn’t get enough recognition in games.”

“Camdon Wright’s One Child’s Heart is a game unlike any other I’ve ever played. It’s beautiful. It really strives to make better humans through role-playing.”

“After playing One Chld’s Heart by Camdon Wright, I was struck by how completely unique it is among tabletop rpgs. One Child’s Heart demands that you engage with your feelings in sometimes uncomfortable, but powerful ways. It’s intense, hopeful, and despite the fact that it’s primary framing device is fictional, very, very real.”

The fantastic Jeff Stormer of the Party of One Podcast brought Camdon on to the show to play the game. If you want to check out what the game feels like and how a one on one game would go, check out this really awesome podcast. Thank you, Jeff, for having us on and playing our game! We’re so excited to share this with the world!

Our friends at She’s a Super Geek had Camdon and Kate on to play the game. Kate ran the game for Andi Fox and Jen Adcock, two badass folks in the gaming world. To hear the first part of the game, check out the podcast! We’ll let you know when the second half drops. This actual play lets you hear how a session with three players goes. Thank you to Jenn, Senda, Andi, and the team behind She’s a Super Geek!

Finally, if you want to learn more about Camdon, the ever amazing Alex Roberts had Camdon join the show for Backstory. Hear Camdon talk about intentional and emotional game design, his hopes for the community, and learn more about how he designs games. Thank you to Alex for having Camdon join him and her thoughtful, compassionate interviews.

Have a listen and let us know what you think! You can also hear an actual play on the Kickstarter site with the folks from the Misdirected Mark Podcast. Thank you to all the folks from MMP and their continued and dedicated support of Camdon and One Child’s Heart!

The Lounge by the Misdirected Mark Podcast recently featured an in depth discussion with Camdon Wright about One Child’s heart. Jesse Edmond spends an hour to talk all things about the game, Camdon’s life, and his game design style.

The Kickstarter is currently live and will be running until May 16th!