I’m always on the lookout for gateway items to get the next generation into the stuff that I’m into. Wondering if anything might make a nephew or neice interested in something comic or fantasy or science fiction related. So a children’s book is definitely right in that wheelhouse. 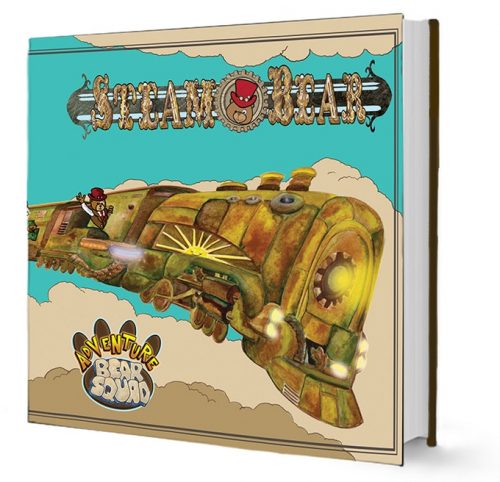 Chairman of the Board – Santiago Salazar

SteamBear is an interactive children’s picture book and comic. It’s book two of  THE ADVENTURE BEAR SQUAD.  A Sci-Fi adventure story designed for the geek-parent and their children. It is built to stimulate creativity and learning. It is a team of bears across genres like the League of Extraordinary Gentlemen meets the Care Bears.

The exciting second installment of the Adventure Bear Squad book series is upon us!  Faced with the disappearance of dreams by every man, woman and child the world is thrown in turmoil and it’s up to SteamBear and his compatriots to save the world from curmudgeonry.  They travel through time and space in SteamBear’s Travel-train and find out why the dreams have gone missing and how to bring them back!

This seems like one of those fun books where you can read with the kid in your life and discover new little pieces while also learning about different points and places in history (judging from the images on the Kickstarter page). I can definitely imagine laughing at the site of a bear flying past Big Ben over in London. 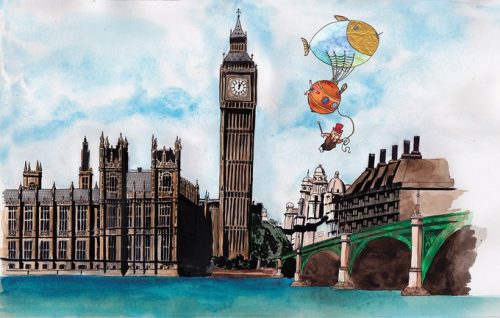 Given that this is a limited edition of the book, as part of the Make 100 campaigns Kickstarter is encouraging for the month of January, the overall product is limited to… 100 copies. So each category has a limited number next to it for the hard copies (this has digital versions as well). At $25 you get the Hardcover along with an original drawing inside. The intriguing one is the $99 level where you not only get the book and the original drawing, but you also will get an original 11×15 watercolor painting. I could see that as being something to hang up in the kid’s room for a long time.

Let’s see – Steampunk, kid’s book, bears, and various spots in time… educational and something you and the kids will enjoy as part of your reading rituals… yeah, this seems like a nice additon to your library!

Writer of comics and novels. In 2006 his first short story "The God That Failed" was published by Terminus Media in their debut comic Evolution Book 1. Since that time he has had stories published in Terminus Media's Evolution Book 2 and Evolution Special, Kenzer and Company's The Knights of the Dinner Table, and Four J Publishing's The Burner #3. Currently he is eagerly awaiting the digital publishing of his first creator-owned comic The Gilded Age #1 to be published online as well as his first novel The Dark That Follows later this year.
View all posts by John McGuire →
Tagged  Andres Salazar, John McGuire, Kickstarter, Steambear, Steampunk, Steampunk Fridays.
Bookmark the permalink.