Steampunk Fridays – Interview with the Creator of Hinges

There are moments when you start reading a comic and you just know there is something about it which speaks to you. And maybe you don’t understand every little thing which has been set out in front of you… maybe those are the things you’ll figure out on a reread. But when you lock in, that’s all it takes.

When I sat down to check out some Steampunkish comics a couple of weeks ago and came across Hinges by Meredith McClaren, I thought I’d read a few pages and move on with my life.Bauble and Orio had other plans for me.

Bauble and Orio had other plans for me. 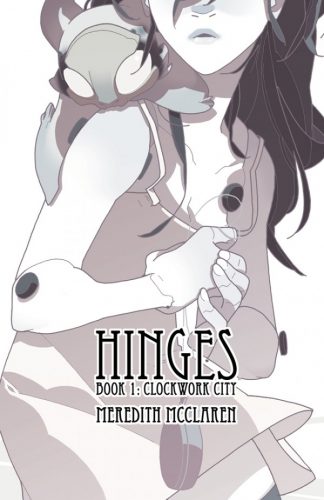 At what point did you sit down to become an artist/writer? Do you remember the first thing you drew/wrote?

I don’t know what I started doing first.  But I do remember that my interest developed after a friend gifted me a SAILOR MOON comic.  Once I realized it was an option to make comics, I started seriously contemplating the idea.

God.  The list is so long.  Anka always does wonderful work.  So does Bengal, Juan Díaz Canales and Juanjo Guarnido, naniiebim, Nico Delort, Tomer Hanuka…  Pretty much all of Twitter and Tumblr.  There’s just a wealth of beautiful work out there I could not possibly name them all.

I haven’t really hit a chord with work/life balance.  I don’t have a family or spouse to depend on me, so I can work whatever hours I feel like.  The only thing I really work around right now is sleep.  And it turns out that I need a lot of it.

Going to conventions and talking to people face to face helps.  But it’s far from the only option.

Putting out fan work will get people to pay attention to you. And if you attach links to your creator owned work to those posts, people will share and promote you simply by reblogging the work they originally liked.  I find that works well.

And make yourself a broken record when you really have a campaign going, like Kickstarter.  You really do need to get loud while you’re running those.

When I can get away with it, I usually just work with a bare bones script.  I know what will happen on each page and what points need to be verbalized.  But I won’t have finished dialogue until I’m actually lettering it.

But when working with editors the script definitely needs to be locked down first, and I’m still learning how to meet that need well.

What’s your process look like? Digital or by hand? Do you have a preference?

I’m all digital now that I have a Cintiq.  I was tired of having all the paper around.

While I only had a tablet to work off of I preferred to draw and ink on paper and then color digitally.

But I’m definitely addicted to my Cintiq now.

So, I was late to the Hinges party, but I consumed it in like a day (and I might have gotten a little misty a couple of times 🙂 ). I feel like the relationship between Bauble and Orio reminds me of all my pets. You love them, you get frustrated by them, and you love them again. With the two of them, it just feels like everything is earned as time goes on.

Not sure there was a question in there. 🙂

It’s very nice to say though, regardless.  😉  Thank you.

What inspired you to create Hinges? And why did you go the webcomic route?

I wanted to do a story about dolls for a while because I just liked the aesthetic.  But Orio’s story really started to formulate as I was preparing to come home from college.  There was a lot surrounding the ideas of home, returning, and comfort that came together to form the story.

And then some of my other projects were held up in their developmental stages, so I had time to start really playing with HINGES.

As for the webcomic route.  I wanted to challenge myself and see if I could commit to having a certain amount of work done weekly, and posted consistently, for a long period of time.  Having it on a public forum would help keep me locked into that commitment. 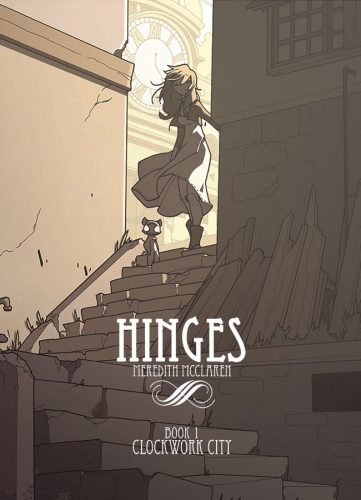 Probably the other way around.  I had very basic ideas about what kind of stories would be served by the visuals HINGES provided, but the full story didn’t formulate alongside the world until later.

I saw that you put the trades out through Image, how did that come to be?

I ran a successful Kickstarter to print book one.  Faith Erin Hicks made mention of it to IMAGE and the book got into their hands and we worked out the rest.

It means a lot to publishers when you’ve shown that you can complete and print a book, as well as acquire enough support to fund it.

What’s been the reaction to the comic?

Good.  I have my loyal followers.  And I’m happy the story struck a cord for some.

Working up to confrontation I think.  It takes a long time to go from, ‘this is not good’ to ‘this must be addressed head on and forcefully.’  It’s something I struggle with a lot.

I also seem to be drawn to characters that have something artificial about their ‘humanness.’  Dolls, robots, bodysnatchers.  They all make the question of what makes people, people much more obvious.

Did you always have a complete story in mind when you started Hinges or was that something you discovered through creating the story?

Yes.  I do not start stories if I don’t know the ending.  I’m flexible about how we get to an ending, and over time I can recognize that the meaning of that ending might have evolved.  But I won’t start anything that doesn’t have a goalpost.

I just don’t want to scramble at the end.  And I also like to know that projects I start HAVE an end.  I don’t like working on things that have an indefinite lifespan.

You’re on the right track.  And you can do all of this by your terms. 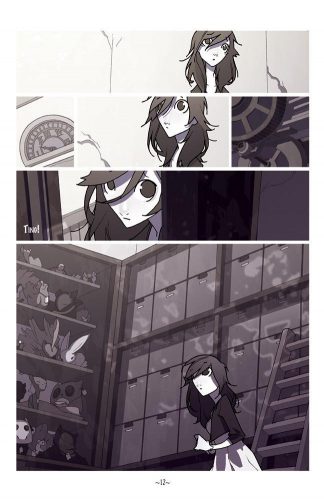 I’m working on an adult book with LIMERENCE that features the relationships and sexy times of superheroes called SUPER FUN SEXY TIMES.

That won’t be out until 2019 though.  There are a few works that will be coming out much sooner, but unfortunately, none of them have been announced yet.

I will have a sketchbook of mermen called BUBBLY available on my storenvy around October though.

Otherwise, the only things to know about me is:  I make famously coveted caramels. I take politics very seriously.  I watch a metric ton of documentaries.  And I love audio drama horror like NO SLEEP or LORE. (But not horror movies. I really do not like horror movies.  It only works if there are no visuals.)

Where’s the best place to find out more about Hinges and the rest of your works?

A Meredith McClaren is very dangerous when encountered in the wild.  Place any pizza and Diet Cokes on the ground slowly and then vacate the area.  If appeased, the wild McClaren will produce work, as seen in HOPELESS SAVAGES v4 by Jen Van Meter, HEART IN A BOX by Kelly Thompson, and JEM and the HOLOGRAMS v4 by Kelly Thompson.

If the McClaren finds your offerings wanting, you will know you are doomed when upon hearing the crow caw three times at noon.

I want to thank Meredith McClaren for being so gracious with her time!

Writer of comics and novels. In 2006 his first short story "The God That Failed" was published by Terminus Media in their debut comic Evolution Book 1. Since that time he has had stories published in Terminus Media's Evolution Book 2 and Evolution Special, Kenzer and Company's The Knights of the Dinner Table, and Four J Publishing's The Burner #3. Currently he is eagerly awaiting the digital publishing of his first creator-owned comic The Gilded Age #1 to be published online as well as his first novel The Dark That Follows later this year.
View all posts by John McGuire →
Tagged  Hinges, interview, Meredith McClaren, Steampunk, Steampunk Fridays.
Bookmark the permalink.