Steampunk Fridays – Kickstart the Comic – The Invention of E.J. Whitaker

Women kicking ass. That’s one of my wife’s favorite things to ask about any kind of media. Conversations normally go like this:

“Does it feature women kicking ass?”

The following comic spotlight feels like it is going to be just that: A woman who is forced to outfox those who would try to do her wrong. However, unlike the normal Kickstart the Comic, this Kickstarter actually finished up at the end of last year (check it out here). Still, the comic is due out in a few short months (you can order your copy here), so I thought I’d give it a write-up. 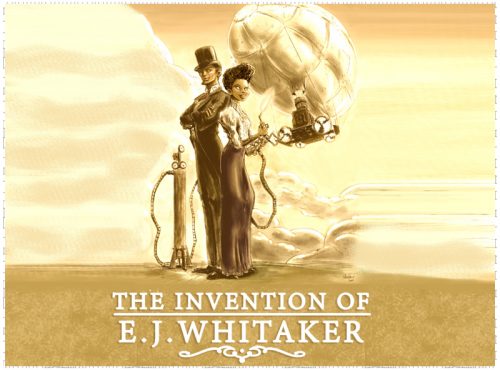 The Invention of E.J. Whitaker

The Invention of E.J. Whitaker is a combination of science, adventure, romance, and transformation that we have been starving to see visualized since our teenage years gobbling up series after series by Octavia Butler and later Tananarive Due. It was in part developed because of our appreciation and passion for telling classic stories featuring smart, aspirational, and diverse female characters.

At the turn of the century, in America’s great Industrial Age, Tuskegee University student Ada Turner is a brilliant and charming inventor with dozens of patents to prove it but she’s got one big strike against her: She’s a woman…and…well, frankly put, she’s got more than a few strikes going on. So in an effort to have her work taken seriously, she comes up with her best invention yet: the pseudonym of E.J. Whitaker…

When “E.J’s” patent for a wondrous flying machine begins garnering national attention, Ada finds herself relentlessly pursued by William, a mysterious young businessman, and his colleague, Samuel. Ada must keep her identity and popular invention under wraps but can she, as more and more powerful people set sights on EJ Whitaker…? People with intentions to use the inventions for their own financial gain and get Ada out of the picture. 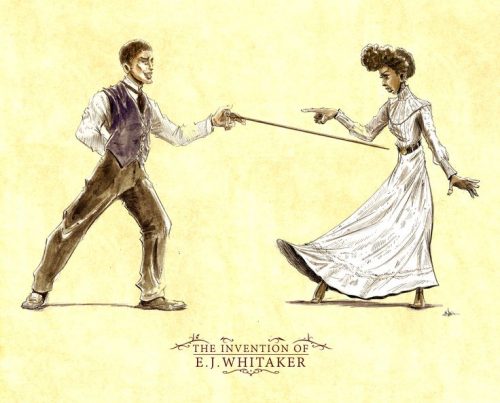 (artwork from Pinterest site for The Invention of E.J. Whitaker)

First off, I like the idea behind the story. Steampunkish espionage. While everyone else is chasing Tesla or Edison, E.J. Whitaker seems to be carving her own path through the world. From the Kickstarter, it describes the sisters’ background in “indie comic book and animation”, which you can definitely see from the concept art they have posted on their website.

Speaking of the art, I love the mixture of engineering patents mixed in with their artwork. I’m not sure if they are all real or not, but it is a nice touch.

This would be the part where I would tell you about the various rewards, but sadly I (we) missed the Kickstarter.

But you can still order a digital copy of issue #1 for $10 here!

After some delays, it appears that the comic book is set to come out Winter, 2017. After that, they have designs on doing additional issues leading up to a full trade. Seems like an excellent time to support an indy book to me.

For more information on The Invention of E.J. Whitaker, check out their webpage here.

Writer of comics and novels. In 2006 his first short story "The God That Failed" was published by Terminus Media in their debut comic Evolution Book 1. Since that time he has had stories published in Terminus Media's Evolution Book 2 and Evolution Special, Kenzer and Company's The Knights of the Dinner Table, and Four J Publishing's The Burner #3. Currently he is eagerly awaiting the digital publishing of his first creator-owned comic The Gilded Age #1 to be published online as well as his first novel The Dark That Follows later this year.
View all posts by John McGuire →
Tagged  Earl Womack, Hasani Mcintosh, John, Kickstart the Comic, Kickstarter, Mark Hernandez, Starline Hodge, Steampunk, Steampunk Fridays, The Gibbs Sisters, The Invention of E.J. Whitaker.
Bookmark the permalink.