Welcome to the first in hopefully many Fridays worth of Steampunk goodness to come. My hope is to shed some light on the genre in any way I can possibly think of. Movies, TV, comics, novels, short stories, artwork, history, and possibly other bits and pieces I haven’t even considered yet. Since I write a Steampunk comic (The Gilded Age – the first issue is still available for FREE download here), it feels only right to reach out and see what others have done. 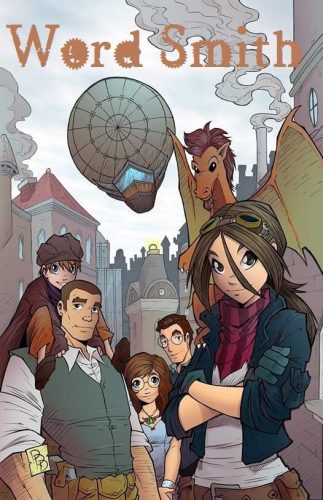 Sometimes all it takes is a word.

Word Smith is a steampunk fantasy adventure graphic novel. I always loved steampunk and it was great to put my own twist on it and write a story in this world. There’s dragons, airships, magical words and much more.

At the core of the story, it’s still a story about people, their emotions, dreams and ambitions.

When one of Victoria’s words goes awry, she sets off on an adventure to try and get things back the way it was. With her dragon, Sparky will she succeed or make matters worse?

Word Smith follows the story of Victoria who crafts words. These words can evoke the emotion associated with it. For example, the word HOPE will give the recipient a sense of hope. 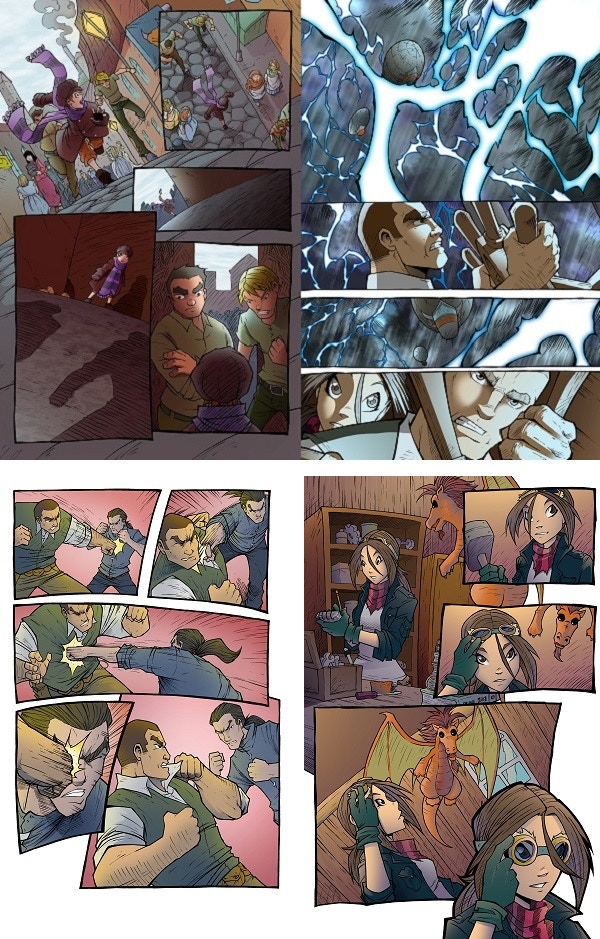 Steampunk goes hand in hand with Inventors. Da Vinci, Tesla, Edison, etc. So the core concept of crafting words seems like one of those things that are obvious once someone else has told you the idea (as in – why didn’t I think of that?). And then having these constructed words become their own magic for people opens an enormous amount of possibilities. Not only could you possibly get a word that has an unintended effect, but what if someone else were to use a negative word for this purpose?

The artwork has a manga influence (if only from the larger eyes on some of the characters), and there is a playfulness at work here. Which makes sense if you are going to have a talking dragon as one of your main characters!

For about $19 US (AU $25) you get a physical copy of the 55-page graphic novel. As you go up the levels, there is the opportunity for prints and original sketches ($60 US). And if you’d like to be immortalized within the comic, you can select the level which lets you “Get Drawn In” ($187 US).

What’s nice is that he offered some of these options as “early bird” or limited rewards for a reduced price. Never a bad thing to reward people for pledging earlier in the life of a campaign.

However, it’s the other option at that same level “Meet the Creator” which will interest those living in and around Sydney, Australia. Stephen basically opens up the meeting as allowing you to ask him questions, discuss projects, or pretty much anything else you might want to discuss. As someone who’s run a few successful Kickstarter projects, it could be very useful to pick his brain if you were considering running one of your own! 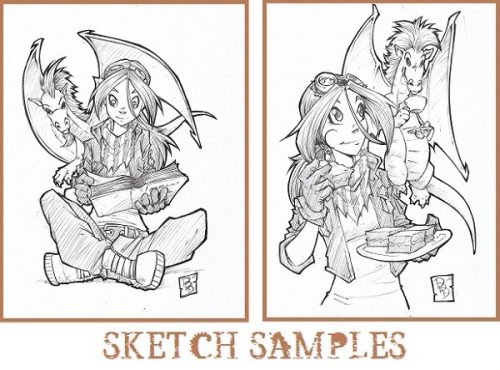 I like the core concept and from the artwork he’s posted on the Kickstarter page, it has the feeling of a fun comic. I’m very interested to see where the story ends up.

For more information on Word Smith or Sigmate Studio other comic projects, check them out here.

Writer of comics and novels. In 2006 his first short story "The God That Failed" was published by Terminus Media in their debut comic Evolution Book 1. Since that time he has had stories published in Terminus Media's Evolution Book 2 and Evolution Special, Kenzer and Company's The Knights of the Dinner Table, and Four J Publishing's The Burner #3. Currently he is eagerly awaiting the digital publishing of his first creator-owned comic The Gilded Age #1 to be published online as well as his first novel The Dark That Follows later this year.
View all posts by John McGuire →
Tagged  John McGuire, K. Hermann, Kickstart the Comic, Kickstarter, P.R. Dedelis, Peyton Freeman, Sigmate Studio, Steampunk, Stephen Kok, Word Smith.
Bookmark the permalink.