The Gilded Age as a Radio Drama! This Weekend!

That’s right. On February 21, 2015 at North Dekalb Mall, the site of the Atlanta SF & Fantasy Expo, the Atlanta Radio Theatre Company is going to do a dramatic reading of The Gilded Age Issue #1!

Cast your mind back to an age where you gathered around the radio and actors on the other end created worlds and adventures with little more than their voices and special effects in the form of sounds. That’s kinda what this is going to be like, except they are going to have the panels from the comic displayed behind them as they work their way through the story.

I honestly don’t even know what to expect, but I’m really excited to even have the opportunity to have something of mine transformed in such a way.

Or if you want to meet Robert Jeffrey II or me, we’ll be manning the Terminus table for the better part of both days. Come by and chat! 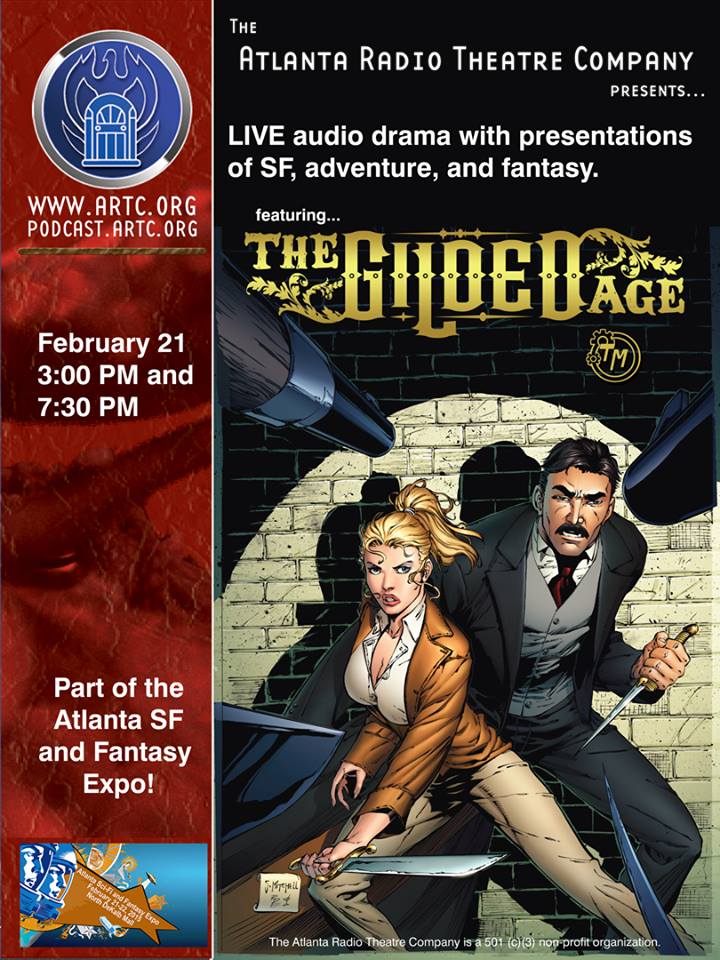 Writer of comics and novels. In 2006 his first short story "The God That Failed" was published by Terminus Media in their debut comic Evolution Book 1. Since that time he has had stories published in Terminus Media's Evolution Book 2 and Evolution Special, Kenzer and Company's The Knights of the Dinner Table, and Four J Publishing's The Burner #3. Currently he is eagerly awaiting the digital publishing of his first creator-owned comic The Gilded Age #1 to be published online as well as his first novel The Dark That Follows later this year.
View all posts by John McGuire →
Tagged  Atlanta Radio Theatre Company, convention, Gilded Age, John McGuire, Terminus Media.
Bookmark the permalink.