Megan Bennett-Burks of Bennett-Burks Design agreed to answer some questions about her Kickstarter for A Far Off Land, A Fate RPG in Two Worlds. We discuss the free preview, her company, and this RPG involving planewalking characters as they drive the destinies of two worlds.

EGG EMBRY – Thanks for taking the time to answer my questions, Megan. Let’s talk about your Kickstarter, A Far Off Land, A Fate RPG in Two Worlds. What is it about?

MEGAN BENNETT-BURKS – Thank you! A Far Off Land is an RPG for Fate Core, it is about people called the Fated, which are demigod-like shapeshifters that travel between two different worlds. One world is essentially our own (deceptively mundane) reality and the other is the fantastic Far Off Land of eldritch beings. The focus is on the drama that goes on between the various organizations with an interest in The Fated and the fate of the two worlds. Ultimately the PCs can push the world towards the future their faction envisions, or rebel against that. 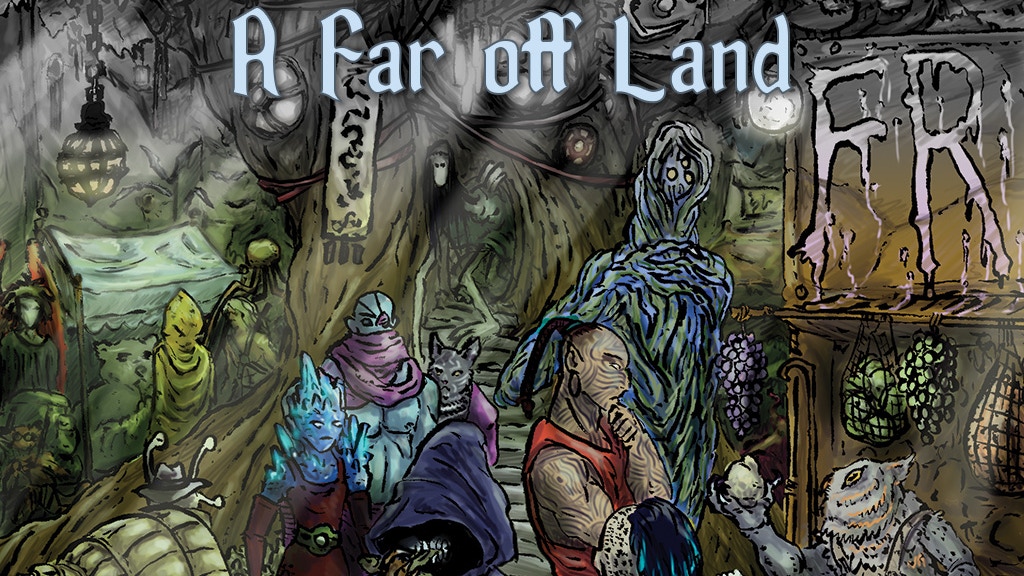 EGG – This game is for the FATE system, or it can be used as a system agnostic setting. What made FATE work for this world? Why suggest it as a non-FATE option?

MEGAN BENNETT-BURKS – Fate is the most natural fit for this game; it is layered in such a way that it can be picked up as a very light system, and then once someone is more comfortable they can add more to it. It also is meant for new settings to be built based on the rules, and its systems for stunts and aspects make this work excellent. It also tends to work ideally for larger than life characters.

It is definitely built for Fate; there is however, a lot of setting material, and you don’t have to use the rules to use that, especially if you want to use another relatively light-to-medium system. I could see someone perhaps using it with RISUS or even something like Savage Worlds. I do think it would take rather a lot of effort to make it work with something like D&D 5e or Pathfinder though for example.

EGG – Let’s talk about your stretch goal to make the game available for Apocalypse World / Powered by the Apocalypse system. As above, what makes PbtA the right expansion for this setting? FATE, system agnostic, and PbtA, are there any more systems you’re considering?

MEGAN BENNETT-BURKS – A lot of why I want to use PbtA is because I currently have a bit of, well, a crush on the system really. I’ve been home-brewing like mad with it. It’s a lot easier to make new settings and rules with than it might initially look, and it works excellent whether you want to build a game using Playbooks, straight up character classes, or just have players pick from a selection of abilities. We’ll probably use playbooks because I think there will be plenty of concepts in A Far Off Land that will fit perfectly with that. I also think the concept of Moves and how they give the games built in PbtA just so much flavor will really help emphasize certain aspects of the game that need it. 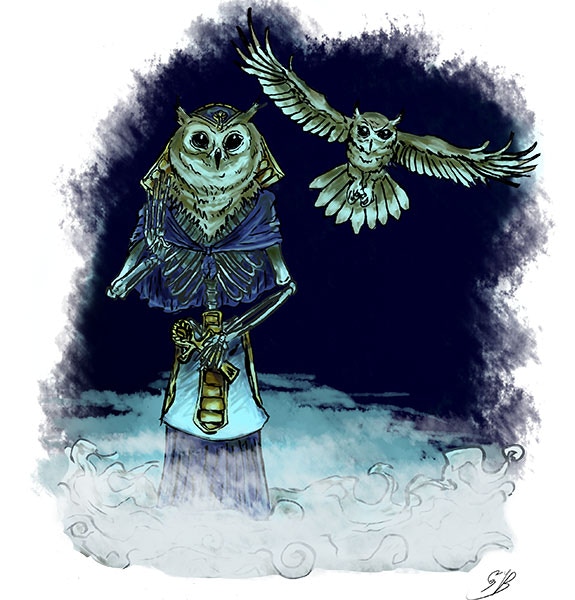 EGG – I’m fond of this question – When Russ Morrissey of EN World, the ENnie Awards, WOIN, and more asked what’s the best way to gauge how the pre-marketing for a crowdfunding was progressing, Owen KC Stephens (Design Lead for Starfinder) offered “I find downloads of free preview PDFs on DriveThru to be a pretty good predictor.” You have a free preview onRPGNow/DriveThruRPG, A Far Off Land – Preview. Was it up before your KS launched? And how has it “tracked” since the campaign got underway?

MEGAN BENNETT-BURKS – I did place it up before I launched the campaign, but, just barely. It’s tracked very well, but to be honest, most free previews seem to do very well on DriveThruRPG, so I think I need to see more research on how different ones compare, and what that really means.

EGG – What’s been the reaction to A Far Off Land – Preview, and the Kickstarter in general?

MEGAN BENNETT-BURKS – So far it’s been really good. When I first placed it up, it was on G+ and not DriveThruRPG (though I only waited maybe a few days until I placed it up there), and people liked it but found it was lacking some things it needed. The suggestions I got for what it needed were very specific so that was good. 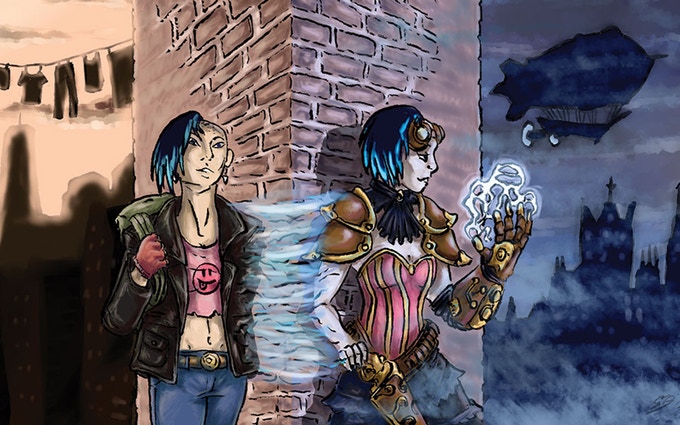 MEGAN BENNETT-BURKS – The hardcover books, they always look great, and all the ones I’ve gotten from DriveThruRPG have been hardy as well. The quality from what I’ve gathered has just continued to climb on DriveThru as well.

EGG – You’re offering several rewards that let you create content for your game, and I’m a big fan of vanity press/wanna-lancer* rewards. Tell us about what the backers can create?

MEGAN BENNETT-BURKS – There’s options to create monsters, magical artifacts, a character (which will also get you a custom character sheet for it), a Eldritch Court (which is a type of organization for the game), or finally a whole realm/location for the game. They all come with an illustration of the creation as well, and the backer gets to choose which of our artists does the illustration (dependent on artist availability, but we will try to give backer illustrations priority). 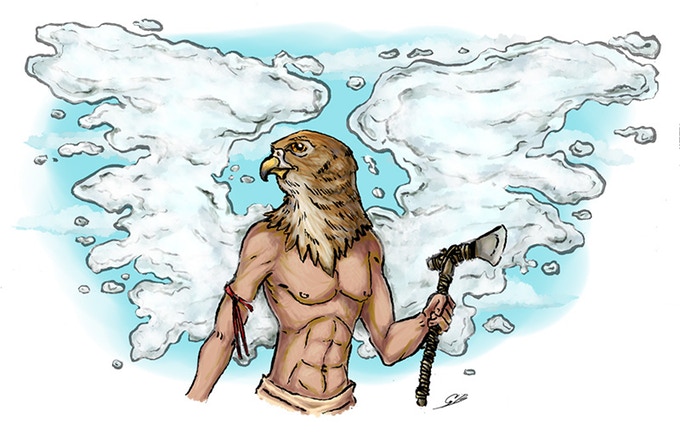 MEGAN BENNETT-BURKS – Rifts, that was the first RPG I ever played. My memories of my first Rifts games are fuzzy to say the least, but, I picked it back up again years later. I LOVE multiverse settings, which should show here, and that my favorite setting is Planescape.

EGG – Why did you create your gaming company, Bennett-Burks Design?

MEGAN BENNETT-BURKS – I freelance as a programmer and web-designer, and wanted to make sure I was doing that legitimately so formed a sole proprietorship. Honestly, I didn’t even think about making a separate company for my RPG books, so I’ve just put everything under one umbrella.

MEGAN BENNETT-BURKS – Beyond this one, I have Oneiros: Five Dragons on the back burner. I placed the early access on DriveThruRPG, and plan to return to it, but, it’s a free supplement that I’m really doing for fun. I also have some other projects planned for the future, one of which will be for PbtA and preliminary I’m calling Fennel Witches. It is about the Benandanti and will deal with a lot of Italian folklore, small town weirdness, and coven oriented game-play. Right now I’m just doing research for it, and that will be the case likely for some time.

EGG – Any parting thoughts? Where can we find out more about Bennett-Burks Design?

MEGAN BENNETT-BURKS – My G+ page right now is the best place, I’m very active on there.

I will eventually overhaul my company website. But, I spend a lot more time working on other people’s sites, so much I have no time for my own!

For A Far Off Land there’s also this: http://farofflandrpg.com/

Try the free preview of A Far Off Land – Preview here.

You can support the Kickstarter for A Far Off Land, A Fate RPG in Two Worlds here. 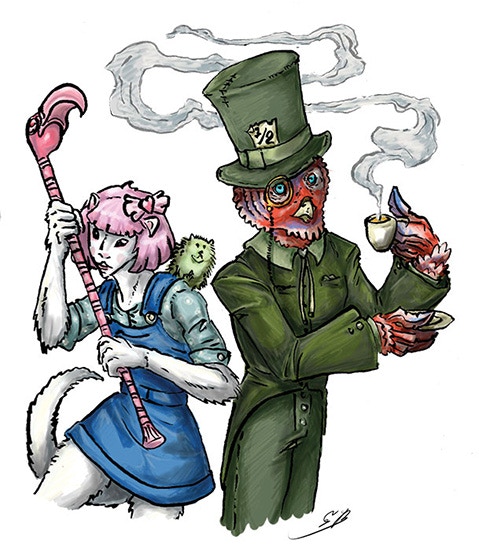 Egg Embry wrote comic book short stories, edited comic book series, wrote and drew a webcomic, and contributed to comic book journalism across the 2000s. Now, he buys the opportunity to write for a variety of tabletop role-playing games in the tradition of vanity press. NOTE: Articles may includes affiliate links. As a DriveThruRPG Affiliate/Amazon Associate/Humble Partner I earn from qualifying purchases.
View all posts by Egg Embry →
Tagged  A Far Off Land, Bennett-Burks Design, Kickstarter, Megan Bennett-Burks.
Bookmark the permalink.