When I first covered AndoCon for my Georgia-centric look at gaming-related Kickstarters, the reason it sparked my interest is something my editor at EN World, Christopher Helton, wrote about here. To keep the industry growing, more local conventions are needed. In the English-speaking world, the big gaming conventions are Gen Con (Indiana), Origins (Ohio), UK Games Expo (England), and, possibly, PAX Unplugged (Pennsylvania). In terms of geography, that does not cover as much ground as it could (no major gaming-only cons in Canada or Australia or California). Without major players dominating the local convention-ing market, that leaves room for regional gaming conventions to fill the void, and AndoCon is doing that handsomely. AndoCon‘s president, Ando Poore, agreed to talk about his con and what 2018 has in-store.

EGG EMBRY – Thanks for talking to us about AndoCon. Let’s start with what is AndoCon? When did it begin? Where will it take place in 2018?

ANDO POORE – AndoCon is not just any gaming convention; we call it a Gaming Convention+. That is because in addition to the large open gaming space with free access to a vast game library, we also have special guests from the gaming industry, a schedule of fun-filled events and game shows, and even a dealer room. We threw our first event in 2013, and have been going strong ever since. Our 2018 event will be held at the Atlanta Marriott Peachtree Corners.

EGG – With that kind of history, why are you Kickstarting the 2018 convention? What makes Kickstarter a better choice than, say, a badge pre-sell?

ANDO POORE – We have done more traditional badge pre-sells in previous years. The reason for Kickstarter this year is that as we become more established in the community and start picking up steam, the costs to run the event start rising as well. Between the rental of the hotel’s convention space, bringing in special guests, and all of the materials needed, we wanted to ensure we had everything in line with plenty of time before the actual event. It also gives us a chance to offer some great perks to our attendees such as the fidget spinner and dice bag add-ons. 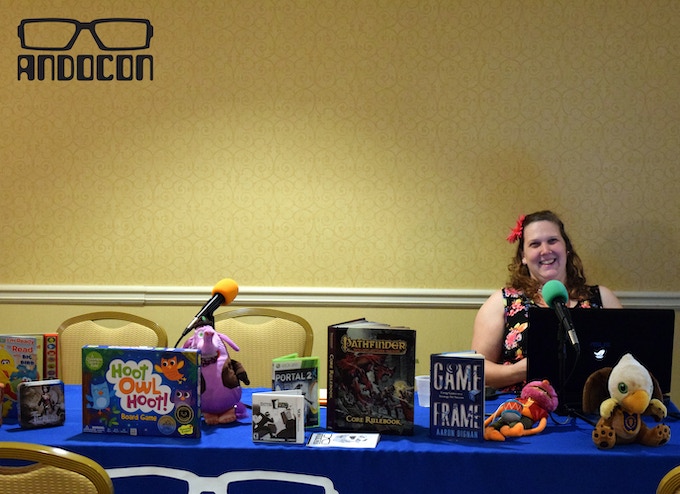 EGG – In terms of numbers, what kind of attendance does AndoCon generate?

ANDO POORE – In 2016, we drew the amusing number of 314 attendees. We’re still fairly small in terms of numbers, but people who come to AndoCon typically come away calling it their favorite convention because of the heart and spirit we keep at the forefront of our minds while putting on our event.

EGG – What’s the rough percentage breakdown at the con of board games, CCGs, and RPGs?

ANDO POORE – We don’t have an official CCG track or section – we tried in 2014 and it turns out our audience tend to not be that interested. Our board game room and RPG room this year will be the exact same size, so I guess that makes it a 50/50 split. 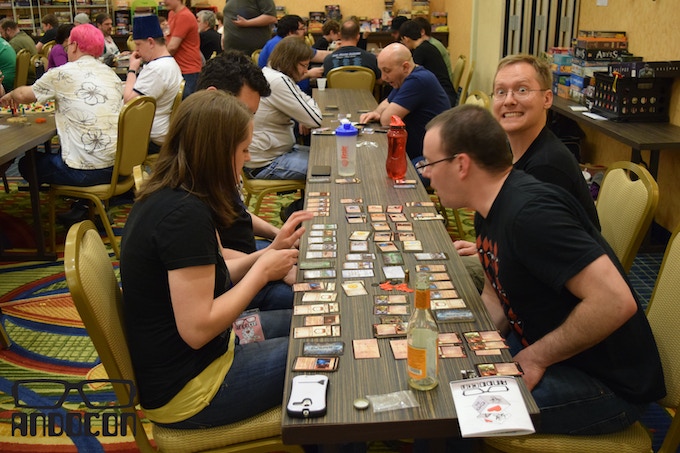 EGG – How many game publishers do you expect to attend? Guest creators?

ANDO POORE – We have a very loyal group of game designers that showcase their creations all weekend long. We’ve even had some of the Steve Jackson MIB stop in a few times. We maintain a list of our confirmed guests on our website, so check there for updates as we lock down more guests.

EGG – In terms of local support, what, if anything, does the local gaming shops and gamers do to help make this show a reality?

ANDO POORE – We have good friends in the local comic and game shops that support and sponsor real cash games. Stores across the metro-Atlanta area allow us to advertise our convention in their stores, and several of them have played host to game day events. They also have sponsored content and run tournaments at the convention. 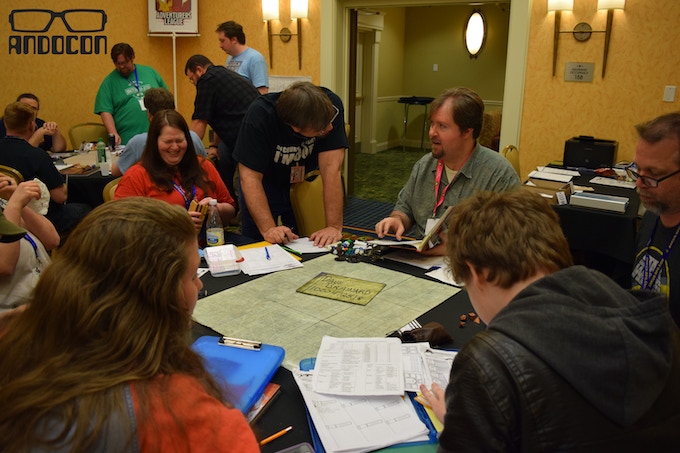 EGG – Can you highlight one pledge level/backer reward that you think is the standout for the AndoCon Kickstarter?

ANDO POORE – Easy – the $225 badge and hotel room package. That means you are set for the whole weekend and all you need to account for yourself is food. Plus, anyone who stays at the hotel for the weekend will receive a goodie bag at check-in that has some AndoCon swag and a few coupons to local attractions like Medieval Times and The Escapery.

EGG – I’m a RPGer at heart, what RPG games are you planning for AndoCon 2018?

ANDO POORE – I’m sure it will come as no surprise that we will host D&D Adventurer’s League, and we’re talking to the GA Pathfinder Society as well. As several of the special guests are RPG designers, they will be bringing their own games to run. The RPG Track will have other scheduled games as well, and we will announce them as they are locked in.

ANDO POORE – Even as a young child, I loved playing board games, and family game nights were pretty common, though we mostly played things like Clue, Scrabble, Yahtzee, and Tri-ominoes. While I was in college, I was introduced to what I call my “gateway games” of Chez Geek, Apples To Apples, and Munchkin. From there, I was always asking for game recommendations, and buying up the games I enjoyed so I could teach them to my friends.

In fact, it was over an intense few games of Blokus that I met the woman that I married. Teaching board games became one of the biggest aspects of my social life in college. Gaming is an integral part of my life. 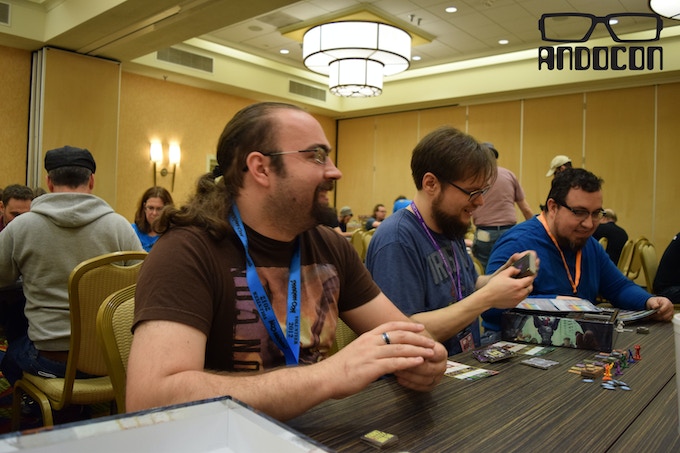 EGG – Why did you create a gaming convention?

ANDO POORE – It actually wasn’t on purpose! After I graduated college, my wife (then fiancée) and I threw semi-monthly gaming parties at our apartment just for fun. But in 2009, a two-day gaming party ended up with two out-of-state guests (coworkers of mine from different offices) and we had a blast. For the next few years, we’d pick one party per year to be “AndoCon”, as a joke – almost a parody of conventions. The idea to make it a real thing came suddenly in 2012, after my wife and I staffed MomoCon for the first time and saw what it was like behind the scenes of a convention. So in 2013, we rented a small conference center in Kennesaw, GA, and packed it to overflowing. We made a big splash in the Atlanta gaming scene, and we have tried our hardest to live up to the promise of our debut year.

EGG – Any parting thoughts? Where can we find out more about AndoCon 2018?

ANDO POORE – If there’s one thing I want people to know about me, it’s that looking across a room packed full of gamers having fun is one of the biggest joys in my life. It’s not always easy, but I genuinely love giving the Atlanta gaming community a place to get together and do what they love. That’s why I do this, and that’s why I’m doing everything I can to make AndoCon 2018 as special as possible. We’ll be posting the guest list and event schedules on AndoCon.org as they are locked in. And of course, our Kickstarter campaign will be open until November 2nd at 9:00 PM, so please get your badge at its cheapest price!

Egg, thank you for your thoughtful questions, and I look forward to seeing you at AndoCon in March!