Greg LaRose (TentacleGreg on Open Gaming Network, where I write some articles) of Amora Game is running a Kickstarter for his latest creation, Art of War: Bushido/Wuxia Setting for Savage Worlds and 5e. 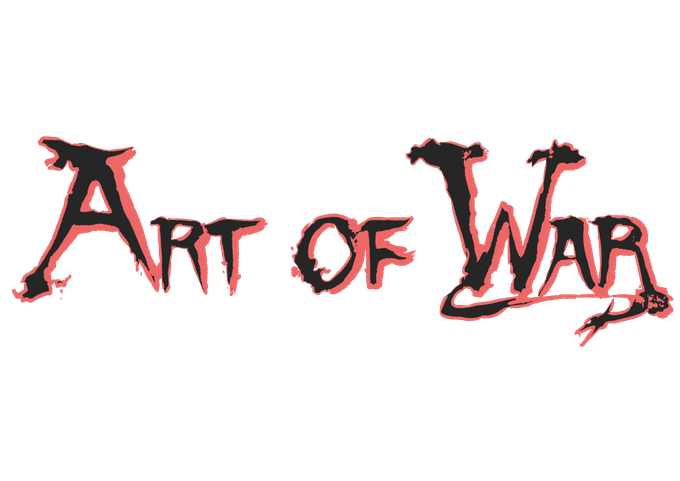 EGG EMBRY – Thanks for taking the time to talk about your project – What is Art of War?

GREG LAROSE – Hey, thanks for having me. Art of War is a dream project I have always had in my head brewing for years. Art of War is an epic storytelling action focused campaign setting inspired by the influences of Chia-Liang Liu martial arts films (The 36th Chamber of Shaolin & Heroes of the East), Akira Kurosawa samurai films (Seven Samurai & Yojimbo), Dynasty Warriors video game series, and a various anime (Basilisk, Naruto, etc).

It is a setting where the people of the San Empire are pulling themselves out of the chaos of a civil war, an invasion of flesh eating Oni, and a return of the restoration of the original royal bloodline. One role the players can take on as heroes is trying to restore hope back to the population. There are plenty of opportunities to play the hometown hero, indulge in a political landscape of deception, or to stand on the Wall and slay some monsters.

It is my love affair with Chinese and Japanese cultures, histories, and mythology. 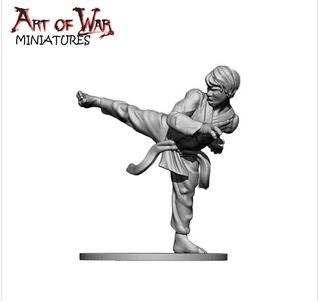 EGG – This project is for two different systems, Savage Worlds and 5e. How are you interpreting the setting to get the most out of each of those systems?

GREG LAROSE – As a whole, the setting is a rich tapestry that easily be played with any system out there. It has access points for any type of story a group would want to play.

System mechanics wise, we adapted the setting to several systems over the past two years with Savage Worlds and 5e acting as solid frameworks to use. Moreover, what I mean is that both are flexible and “rules light” so that you can shape them. This gives us the ability to interject a power point-like system that can added to each rule set. You can scale it up or down to help determine how grounded or fantastical you want the game and characters to be. We call it the Chi System.

These power points fuel different additional rules that give the action movie feel we wanted to achieve. The system also supports Chi Techniques that give the character a specialization of power. Think of the youxia that can run up a bamboo tree and balance on a tiny branch without falling off or having it give to heavy weight. Or the samurai standing on bridge by himself against a squad of archers and he gives a deafening yell. Chi Techniques are those types of powers translated to simple and easy game mechanics.

Besides those being in common with these systems, the Savage Worlds version introduces Tropes that act as frameworks for the creation of heroes. For those familiar with Savage Worlds, think of them as beefed up archetypes or concepts. We also include new Edges and Hindrances. We adapted the classic nosebleed scenario found in anime as a Hindrance to add some comedic relief. I’m also excited to introduce two new Skills to the Savage Worlds ruleset, Acrobatics and Meditation.

Tropes in the 5th edition version, act as character paths for various classes. The Shinobi trope is a path for the rogue class. The fighter receives the Path of the Samurai as a viable option. The Youxia trope is available to both rogues, rangers and fighters, each one taking on a variation of the concept. We are also supporting numerous new Backgrounds, Inspirations, Feats, and equipment. 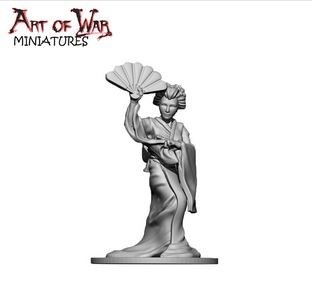 EGG – A number of Amora Game‘s products are for Pathfinder, why not offer a PF version of Art of War?

GREG LAROSE – Great question. We started to use Pathfinder as one of the systems to publish in and the project was called “Hands-Over-Fisticuffs”, but it quickly became overwhelming. There is a lot of amazing source material to pull from to get the mechanics right. But that was also the problem; we needed to pull rules for the revised action economy from this book, convert rules from that book, use OGL from this company. Develop a new class or archetype to handle this, spend more time playtesting to check the math on that. It became heavy, bulky, clunky and imbalanced.

We wanted something that wasn’t cumbersome for new players to jump in and play without multiple rules and errata. Light and flexible is what we wanted to focus on.

In addition, timing played a major factor. With the announcement of Pathfinder 2.0, we would rather see how the new system plays out then produce for an old system where support might fall to the wayside. While we have 200 pages worth material for a Pathfinder edition, it just doesn’t hold the feel we wanted for the setting. 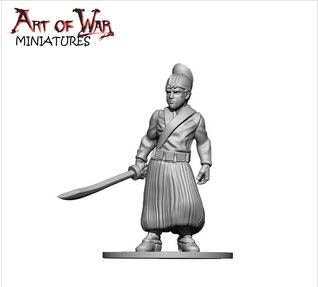 EGG – You did not skimp on the previews. How have they been received, and which system is getting more interest from Art of War fans, Savage Worlds or 5e?

GREG LAROSE – Surprisingly they have almost equal numbers. Art of War teaser for Savage Worlds is racing ahead of Kemonomimi Race preview for 5th Edition. But I have been shocked that the 5th edition of South of the Wall has pulled down a few more numbers than the Savage Worlds version. In contrast, we have more backers on the Kickstarter buying in for the Savage Worlds. Ahead of that, is the backer level where you get both versions of Art of War. I’ve been happy with the turnout. 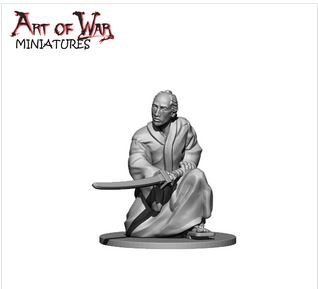 GREG LAROSE – So far I have focused on Starfinder articles. Showing off future archetypes and playing with Faction idea write-ups. Open Gaming Articles are a fun sandbox to play in at the moment. In one of the first articles, I rant about what I feel a Third Party Publisher Organized play society would allow and not allow. After the Kickstarter, I have a few 5e articles for character paths, more factions for Starfinder, and my lost notes for Pathfinder articles.

EGG – What was the game that made you into a gamer?

GREG LAROSE – Techno Wizard in the Rifts setting for the Palladium system was the first character I ever created. My Tremere for Vampire: The Masquerade was the first character I ever played in a game. West End Games d6 Star Wars was the first system I ever fell in love with. Shadowrun was my introduction into the world of cyberpunk and magic. Big Eyes, Small Mouth Third Edition was the birth of Art of War. I have fond memories of L5R and Magic the Gathering card games. But the game that made me a gamer? Well there are two of them: Mage the Ascension & Eberron campaign setting for 3.5 D&D rules.

My love for these two settings and rulesets are unparalleled to anything else. Mage being the handful of d10 Storyteller System and the other using the precursor to Pathfinder. I still have my original books on the shelves and go back to read through them. You can see an early inspiration for the Pathfinder Society concept in Eberron, when it was called the Wayfinder Foundation. Interesting name isn’t it?

You can see that is the name of a compass in Pathfinder. Coincidence? Maybe. Conspiracy theory of that being a key source of influence for a certain big company? Probably, yes. 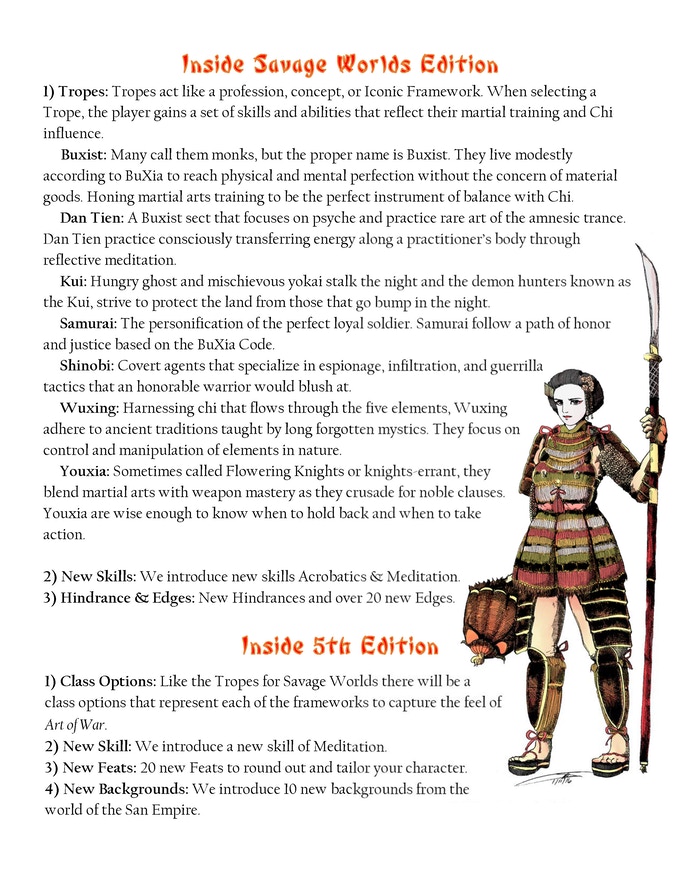 EGG – Why did you start Amora Game?

GREG LAROSE – I started Amora Game in 2012 as an actual TTRPG publishing company, but we were a playtest company well before then. My gaming group was always home-brewing rules, classes, and all sorts of things. We liked using fan created material and pushing the limits see if they were broken or if we could break them. Over time we reached out to a few publishers and game designers looking for playtesters. One thing led to another and then we were holding playtesting sessions once or twice a month for several hours a session. Word got around and people started seeking us out to playtest, and paying us.

After a year or so after of messing around and playing with other people’s toys, I decided I would do my own. At the time I was playing Pathfinder after a gaming group converted over from 3.5 and just sort of went with it. I started publishing, hiring freelancers and artist. Here we are today. 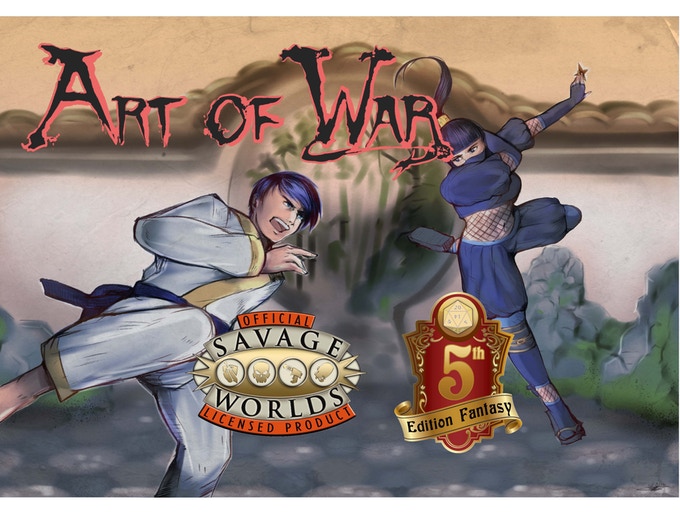 EGG – For those interested in learning more about you, your upcoming projects, and Amora Game, where can they go?

GREG LAROSE – Currently we are focusing on two product lines. One is our monthly/bimonthly science fiction e-mag called Xeno Files. This is laying the foundation for our Xeno’Verse campaign setting. It focuses on Starjammer, Starfinder, and Savage Worlds rulesets. Exotic space places and exotic space races. Our second, of course is the Art of War line, which we are going to continue to push for a release date, even if the Kickstarter is unsuccessful. It will just take a little more time.

Where can you find us? Our facebook page is the most active spot. You can get there by typing in our website: AmoreGame.com, and it will direct you to it. After the kickstarter, I’m going try and put an article up twice a month in the Open Gaming Network site. You will also be able to catch those articles and anime ramblings on my blog under the same pen name: TentacleGreg.com