Five 5e RPG Kickstarters You Should Back – Hunters Mark, Masters and Minions, Sylvanhome, The Blood Plague, and 31 NPC’s Inktober 2017

With Christmas 2017 in the rearview, let’s look at what could be under the tree in 2018 (or well before then) – five 5e RPG Kickstarters that are worth shaking the box to see what’s inside! 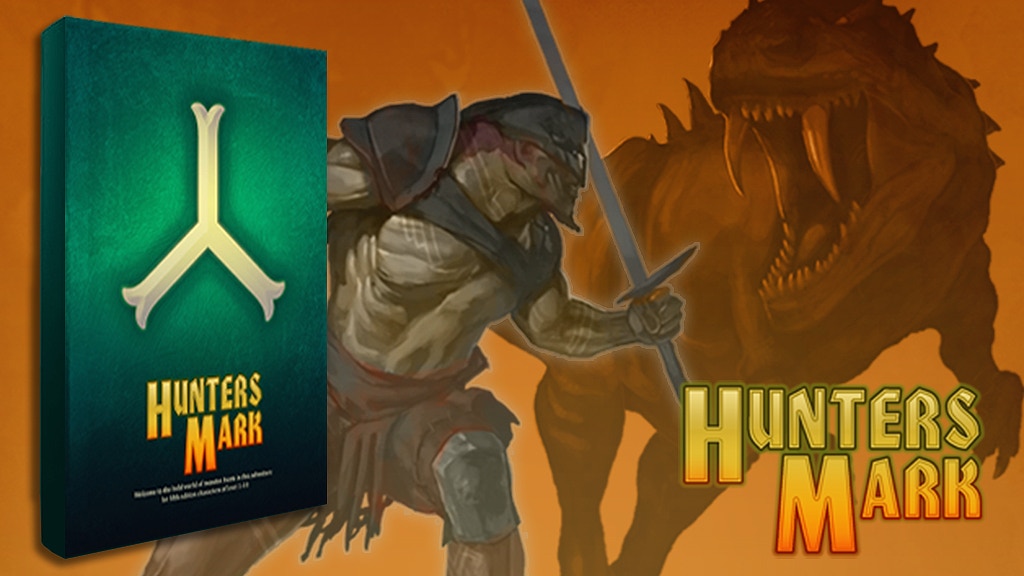 Beneath the waves of the Conquering Sea, a primordial island rises and with it a new threat from an old enemy. Known as Primalrites, this monstrous race of dinosaurs were long forgotten by the monster hunters of today, but ancient fossils remain. And now, the island shudders once more as they return, seeking revenge against those that drove them to an early extinction.

You are about to embark on a rousing adventure that pits mighty hunters against monstrous dinosaurs on an island not big enough for both. These wildly fantastical hunts are recreated whenever you play the Hunters Mark adventure.

In order to play, you must first be acquainted with the 5e rules. The first major adventure in the Hunters World, Hunters Mark is a 5e adventure for characters of level 1-10. You can start the adventure with 1st level characters of your own creation, or, pick one or more from the cast of non-player characters. Either way, the characters should reach at least 10th level by the adventure’s conclusion.”

Let’s do the checklist to decide if Hunters Mark is the one you should fund:

If all of those plus epic art appeal to you, this is the project that you’ve been waiting for.

“An all new 5e supplement featuring detailed NPCs and a focus on how to use their minions, with convenient, time-saving tips.

As game masters, we love 5E, but sometimes we run out of time preparing for a game. If only there was a supplement that had what we needed that would let us drag-and-drop into any campaign, potentially saving hours of game prep time. If only there were some new and exciting content we could offer, and for the proper XP level of the players. Well, fellow GMs, now there is!

What is Masters and Minions?
One thing we’ve noticed as game masters ourselves, is the challenge that most GMs face: prep time. With busy lives like ours in mind, we wanted to create a book that has NEW content to help with that!  The idea with Masters and Minions was to develop some Bosses and their followers, but with a focus on how they use their minions – and provide some tips and strategies that any GM can “drag and drop” into a new or existing game. This new content will span levels 1 – 20, so the book will continue to provide you with new content as your players level up!”

This is a 5e NPC-focused product. Do you need major NPCs and their henchmen for all levels? If so, this is a book with art to set the mood, a solid focus, an amazing creative team including Dan Dillion and Jim Pinto, and a mission – to make game prep easier. It’s well worth checking out (just see the pages below).

“Places by the Way #4: Sylvanhome is a short location module for D&D 5E written by Douglas Sun and published by Ramen Sandwich Press. 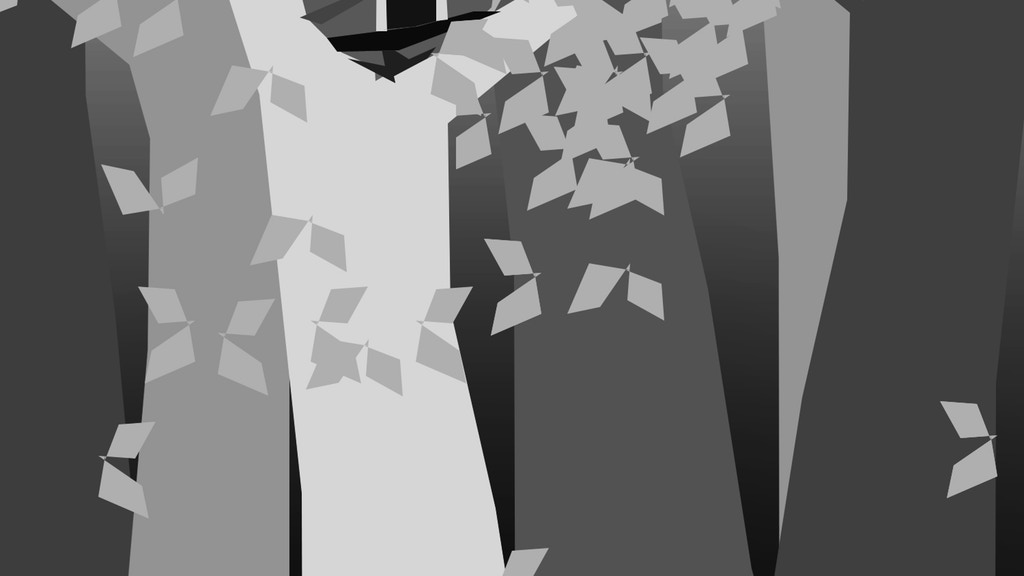 Places by the Way

For those of you who missed our earlier campaigns, Places by the Way is a series of short modules that I’m creating for use with Dungeons & Dragons 5th Edition. They work fine as short stand-alone adventures, but each Places by the Way module is meant to be a kit for creating a memorable interlude in a larger campaign. Each entry in the series consists of two versions sold separately but similar in content. One version is set in the Forgotten Realms, so Ramen Sandwich Press sells it exclusively through Dungeon Masters Guild. The other version assumes a generic setting and complies with WotC’s Open Game License. It’s available through DriveThru RPG, RPGNow and Dungeon Masters Guild, and a print version is available through Amazon and other online outlets.

For purchase links and product information, check out the Ramen Sandwich website. We also post news, announcements and random musings to our Facebook page, and I have posted some designer’s notes to my personal blog, “I Think We’ve Been Playing It Wrong.”

Places by the Way has two inspirations. One is the line of mini-adventures that AEG published as part of the D&D 3rd Edition open license boom. I recall that the word count for those modules was only 5,000 words. I wrote a few of them, and they suggested to me that the short form could be made to work in adventure modules as it does in fiction. That is to say, if the typical folio-sized module is the novel, and the hardcover campaign books that WotC is publishing for 5th Edition are epics, there should be also be a place for the module equivalent of short stories.

The other inspiration is the strangely important role that side quests play in what we now recognize as standard CRPG structure. Side quests are those little tasks that you can find throughout the game world, and while they have no direct bearing on the main story, they allow you to accumulate XP, money and items, and meet memorable NPCs. If they’re done well they can add real flavor to the game experience. Fallout remains one of my very favorite CRPGs. One of the first things that jumps back into my mind is Tandi, the Shady Sands girl voiced so perfectly by Cree Summer. Her wistful musing about what lies beyond her little village convey the fallen melancholy of that world so beautifully that it made me forget all about finding that water filter. My goal for Places by the Way is that somewhere in the series, I will create an NPC encounter that has an effect like that. My disadvantage is that I won’t have a talented voice artist to help. But I’m going to try to create a moment in a campaign that you will find memorable out of proportion to its role as a diversion.

Places by the Way modules average about 15 numbered locations, each of which offers an encounter, noteworthy items, noteworthy NPCs or an opening into which you can hook your existing campaign.

We’re on to Places by the Way #4: Sylvanhome, which describes a small community of wood elves. In D&D’s conception of elves (which draws heavily on Tolkien), sylvan elves embody a particular tension between their good alignment and beneficent attitude toward other beings on the one hand and their isolation and deep suspicion of outsiders on the other. Sylvanhome works on that tension, depicting an elven settlement uncertain of how to respond to the presence of humans in a forest they are used to having for themselves. It will be up to your players how deeply they want to involve themselves in Sylvahnhome’s affairs, but entertaining situations will unveil themselves if they do.

Sylvahnhome is still being written, but we expect that it will be in layout by the end of November and the Limited Edition will be ready to ship in mid-January, as soon as Kickstarter clears payments from this campaign. Ramen Sandwich Press could use a little extra funding to make sure we can pay for stuff like layout, art and maps in a timely manner. So we’re turning to the Kickstarter community once again in the hope that you’ll help us keep this series going.”

Moving away from the NPCs and monsters above, this offering is an adventure. Either a standalone or, with the prior three parts, a campaign interlude. For this 5e offering, it’s 15 locations centered around wood elves. As a DM, you can judge if this is something you could use for your world.

“Fill out your fantasy RPG campaign with these 31 original non-player characters! All contained in this full color 6×9” softcover book!

HI! My name is Chris Nichols, and I am an artist/illustrator based in the Twin Cities area. Recently I have been focused on writing, illustrating, and self publishing children’s books and comics filled with influences taken from skateboarding, my daughter, fantasy fiction, sci-fi, and heavy metal music.

This project started as an idea to create a new, fantasy tabletop RPG character every day for the month of October. At the end of the month I had 31 original characters. I decided to put them all together into a book, so I could share them with friends.

31 NPC’s Inktober 2017 is a 6×9 inch, 64 page, full color, soft cover book. I made it to assist Dungeon Masters, to help fill out their campaign with characters. My goal was to give each one a name, a look, some stats, and a quick description for how they would fit into the campaign.

Now I know Dungeon Masters are super creative, so I kept the information about these characters vague. On each NPC (non player character) page there is a large space for you to add in notes. Give them a backstory, a motive, how they’re connected to the PC’s or other NPC’s in the campaign. That is all for you to decide!

The last page has character tokens for you to cut out and use in your tabletop games.”

Ok, this book is not precisely 5e, more any-edition-of-D&D/PF/OSR. That said, it’s 31 NPCs with simple stats, simple plot hooks, art, and tokens. If you need a variety of encounters that are broad enough for you to make up the details, this may be for you.

The Blood Plague is a Dark Fantasy Adventure Module for Dungeons & Dragons: 5th Edition for Levels 3-5 which focuses on a deadly plague. The Blood Plague has struck the world of Penumbra and left it’s people reeling in horror at it’s ferocity.

Check out some of the early & finished artwork we’ve had made! Jovina Chagas & Jessica Bellamy are the lead artists on this project, and really do justice to the gritty feel of the world.”

Another 5e product, this one an adventure, and, like so many of these books this week, the art is first rate. Jovina Chagas’ understanding of landscapes and ink is inspiring. The world looks foreboding and ready to consume weak player characters. Utilizing art this strong projects darkness for the DM to build upon. Check out the campaign to see more. 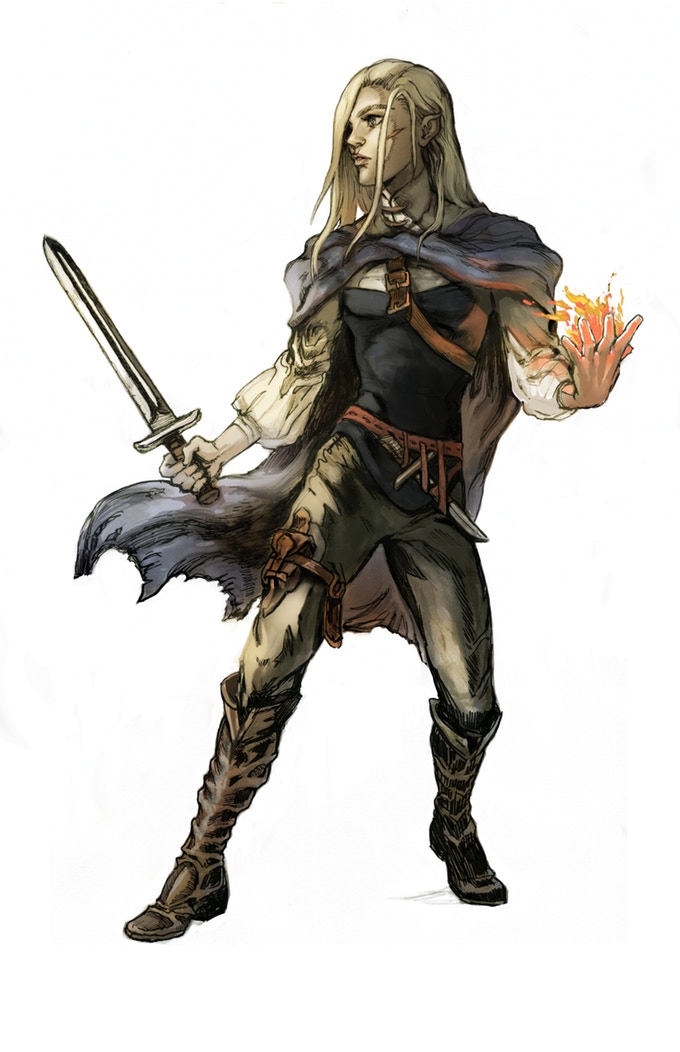 Auri, Human Rogue. While Magic is rare in Penumbra and it’s practices taboo, some still dare. Art by Gyo.