Winner of multiple RPG awards, including a 2017 ENnie, Eloy Lasanta is one of the busiest individuals in gaming. Running Third Eye Games, he has projects in the works and Kickstarter and has just joined John Wick Presents as their financial manager. I reviewed his Pip System RPG on EN World (here) and his current Kickstarter for AMP: Year Four (here) and, for the Halloween holiday, he agreed to answer a few of my questions about his Kickstarter, his company, and his free AMP: Year One Quickstart!

EGG EMBRY – Eloy, I know you have a lot going on so thanks for doing this interview. You’re working on your Kickstarter for AMP: Year Four – The Year of the Invasion – Tabletop RPG. Tell us about this story?

ELOY LASANTA – It all began with AMP: Year One, where I decided to start my own supers mythos and create a new world that is reminiscent of tropes and ideas we’re used to out of our darker hero/villain stories, but adding in my own flair of the dramatic. There are a few key players in the world, but it’s set up for the players and their characters to steal the show in the end.

The story of AMP breaks down what happens when people start developing powers, basically, today! The timeline starts in 2015, which each new book we’ve released advancing the story. You find out what caused AMPs to occur in the world, and why they are a phenomenon right now.

Several groups, we call them Affiliations, pop up as well, all tackling the issue in their own way. Characters like Doctor Luminous and Critter form the Seekers of Enlightenment, trying to figure out what’s going on from a scientific perspective. Typhoon learns out to leverage superpowers to cause chaos and usurp power. The Changelings run and hide from the problem, but help their fellow AMPs escape persecution. Other groups, like the United Human Front, are built up as villains in the setting, but are presented as playable options too, just in case you want to tell stories of hunting down AMPs instead of being AMPs yourself.

There are a lot of layers to the game. I could go on forever. 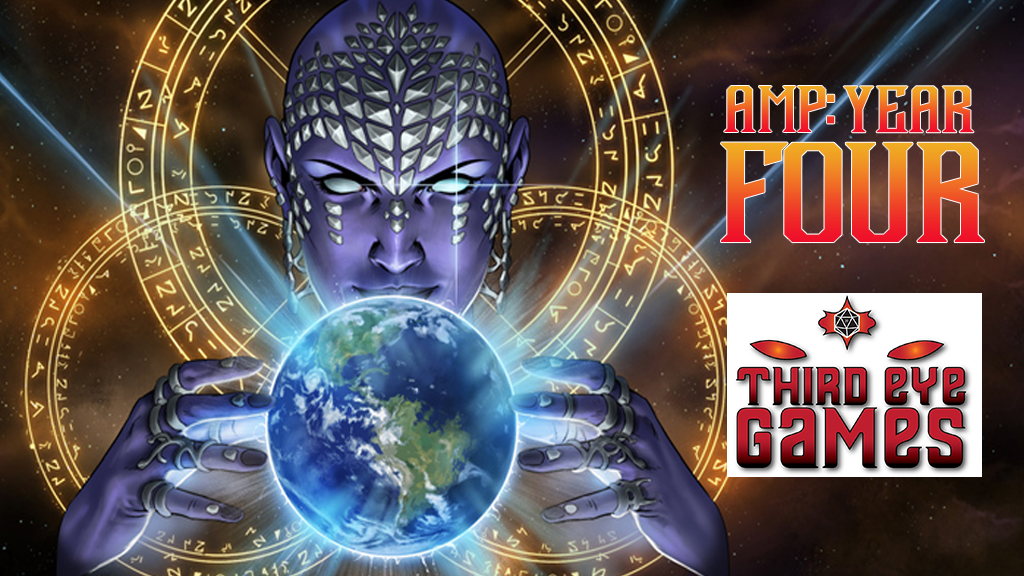 EGG – This Kickstarter is for the fourth year of this series, what made you decide on a multi-part game like this?

ELOY LASANTA – Insanity! But no seriously, I wanted to do a game in a way I hadn’t seen before. Breaking the books into years, and presenting the next installment each time with expanded stories, escalating dilemmas, and dynamic characters, has been a lot of fun. It’s been an exercise in keeping track of characters and storylines, not unlike what the comic industry has to deal with, I assume.

EGG – In your wildest dreams, where does AMP go in terms of longevity? AMP Year Ten? Year Fifty? And if it goes that far, will a player need to start with Year One and play up to the current timeline?

ELOY LASANTA – I have a 5 year plan for the AMP gameline too, which means we’re almost done with the official story. Then we’ll be working on expanding the world and player options out even more. I have a ton of ideas, from “what if” books to alternate timelines, to adding more groups and characters into the mix. There are a lot of possibilities to explore within the AMP setting.

EGG – This game uses an original system, can you give us a quick rundown of it?

ELOY LASANTA – Sure! It uses the DGS-Combo system, utilizing a single d20 for all checks. There are no Attributes; instead, you have a list of 22 Skills and you combine them to get your bonuses. For instance, if you wanted to fix a computer, your take your values for Crafts (for knowing how to fix) and your Technology (for what you’re fixing) and add them to your d20 roll against a target number (10, 20, 30, 40, respectively). Your chosen powers actually become a part of this sequence many times, adding Earth + Fighting or Awareness + Perception at times.

Unlike a lot of other supers games out there, AMP isn’t a toolkit, build-your-own power sets, kind of game. Instead, we supply you with over 50 different powers in the corebook, and even more from the other books that have come out. You can pick up to 3 and explore their combos and abilities within them. If you have Air Control, for instance, you can create electric fists, gusts of wind, and fly. You don’t need to take the flight power, unless you want to be a really amazing flier.

EGG – I’ve started asking this – When Russ Morrissey of EN World, the ENnie Awards, WOIN, and more asked what’s the best way to gauge how the pre-marketing for a crowdfunding was progressing, Owen KC Stephens (Design Lead for Starfinder) offered “I find downloads of free preview PDFs on DriveThru to be a pretty good predictor.” You have a free preview on RPGNow/DriveThruRPG, AMP: Year One Quickstart. That’s been up since the first Kickstarter, correct? How has it done for you over the years in promotional terms?

ELOY LASANTA – It’s been up actually just since the beginning of 2017. I only just now got on the QuickStart train that everyone else has been riding for years. So far, though, around 500 downloads. I don’t know if that’s a good or bad number, but there it is. 🙂

ELOY LASANTA – Well, that’s an easy one… the $325 tier that not only lets you make a character, but we’ll also write up a part of the book where they make a contribution to the world. There is a tier to just make a character and just be a part of the story, but this one combines them both. They are always really fast to go, and we only have a limited number.

If you’re not into those types of backer rewards, we do offer the Story So Far tiers (in either PDF or Print) for you to get all the books up to Year 4. This gives you the complete story and all the player options in those books (there are a lot more). But it’s a great place to start!

EGG – You’re offering to let some backers create content for your RPG. That speaks to my love of vanity press/wanna-lancer* rewards. Tell us about what the backers can create?

ELOY LASANTA – We have major characters in the story that backers made up. For instance, Shell was a backer character from Year One that has evolved into a major player all the way through Year 3 and the catalyst for Year 4. Backers get to make a character using the corebook and the new rules from whatever book we’re working on; in this case, that’s AMP: Year Four, which means they’ll be able to take advantage of the new magic rules and powers available.

ELOY LASANTA – More about me? I’m pretty boring. I’m married with 3 kids in Florida. I’m a huge fan of superhero movies and supernatural TV shows (though, oddly enough, not Supernatural). Most of my time is spent either playing or designing RPGs, though. It’s kind of my passion, and I usually have like 5 projects ongoing at any given time, because I’m a masochist.

I got into the hobby with RIFTS and eventually moved on to White Wolf games and then became quite the polygamerous player, bouncing from system to system and setting to setting. I’ve never settled on one perfect game, not even my own. I’m a fan of trying everything the hobby has to offer.

EGG – Why did you create your gaming company, Third Eye Games?

ELOY LASANTA – I’m currently working on three secret projects called Project Moon, Project Needle, and Project Door (and I just added another, but it doesn’t have a designation at the moment), but the ones in the open are AMP: Year Four and A Kid’s Guide to Monster Hunting, both of which I’m very much excited for.

EGG – Any parting thoughts? Where can we find out more about Third Eye Games?

ELOY LASANTA – You can always visit http://thirdeyegames.net for more info, and from there you an get to our G+ communities, FB pages, and the like. We’re always creating new things, so come and see if any of it strikes your fancy.

Thanks for having me!

You can support this Kickstarter campaign here. the campaign ends on Friday, November 3 2017 2:00 PM EDT.