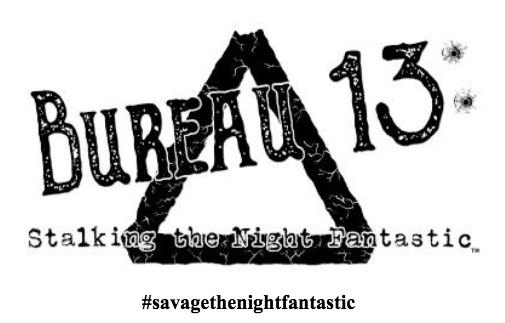 Longshot Productions, designer of the Bureau 13: Stalking the Night Fantastic Savage Worlds Edition, is pleased to announce new additions to the growing team of creators.

Rick Hershey is an illustrator, graphic designer, writer, and tabletop game publisher. He has worked in the gaming industry for over 15 years providing work as a freelancer for a multitude of clients including Wizards of the Coast, Dreamworks Entertainment, Pinnacle Entertainment, Fantasy Flight Games, Monte Cook Games, and many more. Mr. Hershey currently owns and operates Fat Goblin Games and is well known for his former art studio, Empty Room Studios, which provided quality art and design services for film, comics, and game industries.

Karl Keesler is an award-winning Art Director that started in the gaming industry back in 2002 with United Playtest. He was the “Layout Guy” on Gaming Frontiers, a d20 magazine. From there he partnered up with the guys at Dog House Rules and took his passion for graphic design and gaming and turned it into a Gold ENnie in 2004 for Best Electronic Product for their flagship book, Sidewinder: Recoiled. He continued to work on numerous page layouts and logo designs for Dog House Rules’ Frontier Towns, The Fort Griffin Echo, Buckshots, Six Guns and Quick Quests; garnering multiple ENnie nominations. Recently he has started freelancing with character sheet design work for Fabled Environments’ Savage Worlds setting, Olympus Inc.

Over the years, Karl has taken his love of graphic design, pop culture, and Savage Worlds to newer heights with running his unique conventions games.

Will Sobel has experience in every channel of the industry starting with running a local game store in 2014. Since then he has worked in a mass retail store, was a distribution buyer at Southern Hobby Supply, and worked in marketing at Upper Deck. Now, Will wears many operations hats at Green Ronin Publishing including sales and licensing. He also does design and writing for several companies including Green Ronin and Gallant Knight Games, as well as writing and editing board game rulebooks for Druid City Games, Renegade Game Studios, and others

Please use #savagingthenightfantastic for tracking of all posts, reviews, and comments.

Egg Embry wrote comic book short stories, edited comic book series, wrote and drew a webcomic, and contributed to comic book journalism across the 2000s. Now, he buys the opportunity to write for a variety of tabletop role-playing games in the tradition of vanity press. NOTE: Articles may includes affiliate links. As a DriveThruRPG Affiliate/Amazon Associate/Humble Partner I earn from qualifying purchases.
View all posts by Egg Embry →
Tagged  B13 Team, Longshot Productions, Press Release.
Bookmark the permalink.