3 RPG Kickstarters You Should Back – The Hidden Halls of Hazakor, Redshirt, Vol. 2, and On the Shoulders of Heroes

This week is a callback to RPG Kickstarters that I’ve done articles for elsewhere, for sequels to products I’ve already covered, and for relaunches.

“A ‘Vikingesque’ campaign setting designed for use with the 5th edition and version 3.5 of the world’s most popular RPG.

Greetings explorer, welcome to our domain! The On the Shoulder of Heroes campaign setting is designed for use with world’s most popular roleplaying game. It is inspired by old school roleplaying games, traditional fantasy, Germanic and Japanese mythology. It is based on the idea that the world was built by the deeds of great people – both good and evil.

The book is close to 230 pages divided in 9 chapters. It is beautifully illustrated in grey-scale by 4 talented artists and is bound in a sturdy hard cover.  We’ve uploaded some previews for you here.”

I covered the first version of it here and those thoughts still apply. This one’s major addition is that it will also be for 5e as well as 3.5e which answers my question in the first article.

The Hidden Halls of Hazakor is a fully illustrated, 64+ page starter adventure for fifth edition Dungeons & Dragons — and written with a special focus on young, beginning Dungeon Masters. 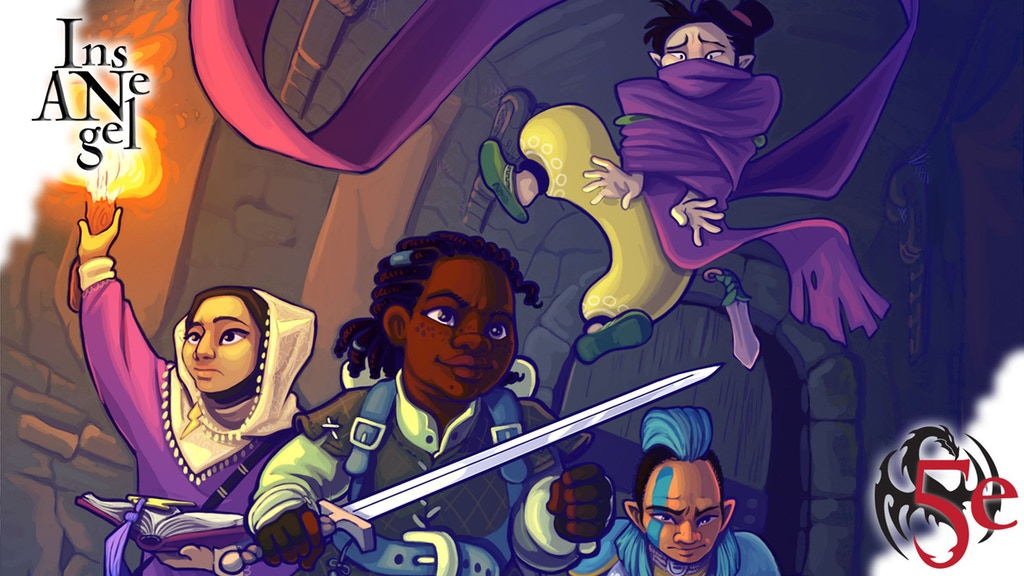 Created by designer and editor Scott Fitzgerald Gray, The Hidden Halls of Hazakor is a perfect introduction to classic dungeon-crawl adventuring for young DMs of ages 12 and up. In a friendly and straightforward fashion, it demonstrates some of the ways a good fantasy RPG adventure can be put together, and talks about some of the tricks and knowledge that all good DMs learn through the experience of running games — but which aren’t always instinctive for a young player sitting in the DM’s chair for the first time.

This adventure builds on the rules and information presented in the D&D core rulebooks and the D&D Starter Set, and on the first-time DM’s experience of having previously been a player in the game. A beginning DM running the adventure will learn to think about the ways in which the story can go in different directions based on what the characters do — and how to not be scared when it does. They’ll practice bringing NPCs to life by way of interesting quirks, to help the players engage with and remember them. They’ll get tips on running fun combat sessions, building from an initial slate of simple, single-foe encounters to more complex fights. And they’ll learn to use humor as a tool to make the game interesting and memorable, especially for other younger players.

The adventure’s approach to humor fits perfectly with the work of artist and comic creator Jackie Musto, whose full-color illustrations will bring The Hidden Halls of Hazakor to life. (And if you’d like the young gamer in your life immortalized as their very own RPG hero, Jackie will be doing a limited number of original illustrations as part of the Kickstarter campaign’s “Eternal Hero!” reward tier.)

In the vein of many classic starter scenarios, the adventure features a fully detailed local keep, where the characters meet and learn of the legendary lost ruins in the nearby wilderness. Those ruins then present a classic dungeon crawl in nine parts, featuring fifty different areas to explore, fun physical puzzles and daunting traps, a host of classic monstrous foes — including not one but two dragons — and other challenges that will bring the characters to 5th level… assuming they survive the threats of Hazakor’s lost halls.

This isn’t a stripped down or simplified adventure scenario, and there’s no reason why experienced players and veteran DMs won’t also have a good time running it. But The Hidden Halls of Hazakor has been designed and written with young DMs firmly in mind — helping them break down the processes of running an effective RPG session, creating a fun and dynamic world in the dungeon, and sharing that world and its stories as only roleplaying games can.”

It’s an all-ages 5e DM’s toolkit and adventure. For more details on it, I interviewed the creator, Scott Fitzgerald Gray, on Open Gaming Network here.

“Redshirts: Adventures in Absurdity Vol. 2 is a Starfinder adventure path guaranteed to make you laugh so hard you’ll pee your spacesuit

What is Redshirts: Adventures in Absurdity?

Glad you asked! It is a Sci-fi/Comedy Adventure Path that is 100% Starfinder compatible. We launched the first volume on Kickstarter in August, and opened the PDF to the public in December. Within 6 days it was the number 1  hottest Starfinder product on DrivethruRPG, and earned their “Best-Seller” status. The entire Adventure Path, which revolves around surviving a deep space exploration mission with a dysfunctional command crew, will be 4 books and take Players from Level 1-12.

How do critics describe it?

What is the tone of the game?

Absurdist humor mixed with low-brow puns. It’s great for fans of Hitchiker’s Guide to the Galaxy, Futurama, or The Orville.

What Can we expect in Volume 2?