Kickstart the Game – Heroes of the Great War: Limanowa 1914

Since the start of writing words on the Tessera Guild, I’ve focused my column on tabletop RPG Kickstarters with a vanity press reward level. It’s helped me to build a RPG resume, write amazingly fun content, participate in contributing content for a Kickstarted project, obtain freelance work, get to co-write a comic book one-shot as well as a mini-series, and, best of all, get to talk to new folks across the world about gaming of all types. Being a wanna-lancer has been a win for me and will continue to be as I write articles about my experiment.

However, this week, I’m kicking off another series – Kickstart the Game (thanks for the title, John). This series will focus on gaming Kickstarters that look like they’re worth every penny and then some but do not offer any vanity press options. Instead, they make up for it awesomeness.

To kick this series off, I took a suggestion to look at a WWI board game… 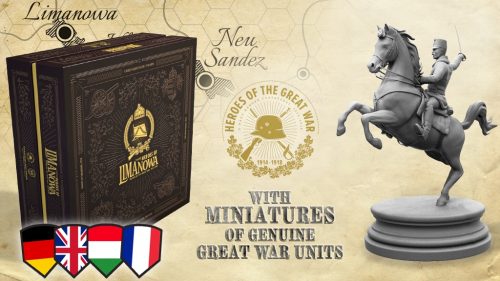 Heroes of the Great War Limanowa 1914

“Command genuine Great War units, cooperate with your allies and rewrite history in this tactical-scale war board game for 1-4 players.

Heroes of the Great War: Limanowa 1914 is a tactical board game set in the Eastern Front of World War I, focusing on the events near Krakow and the region of Galicia in December 1914. This territory was under heavy attack by the Tsarist Russian Empire, which tried to break through the ever thinner lines of the Austro-Hungarian armies. Over two-thirds of the well-equipped Russian forces were pushed against this front, winning victory after victory, occupying city after city, gaining the infamous name, the Russian Steamroller. In November 1914 the Austro-Hungarian High Command planned a desperate counterattack, by taking advantage of what seemed to be an error in the Russian maneuvers. 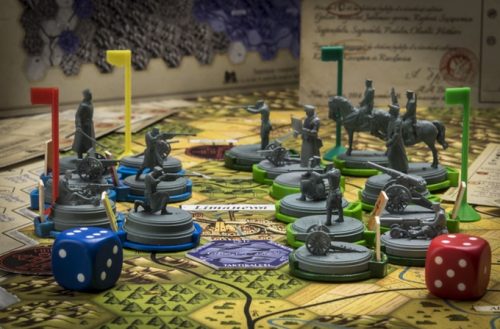 Players can choose to assume the command of both fighting sides, either leading the VIIth or VIIIth Russian Corps to victory or facing the enemy with either the Hadfy Group or Szurmay Group. With the help of their combat units, each represented by highly detailed 28mm miniatures, players lead skirmishes, plan maneuvers over various terrains, set traps using secret battlecards and lay sieges to fortified towns. The units are based on real life Great War-era military units, mimicking their functionality and looks as much as possible. Except of some smaller scenarios, the armies are accompanied by one or more Generals, each based on battle hardened men of their own time, coming with combat abilities special to them. 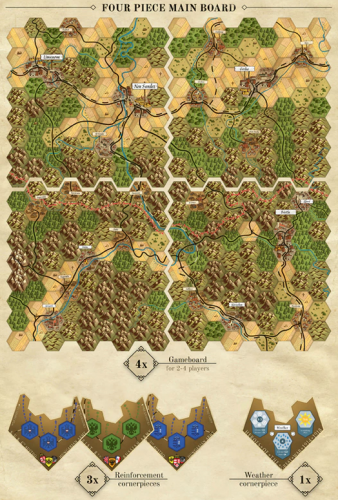 The Hussar Colonel Box is our all-in-one offer: it includes the base game, all miniatures and stretch goals, and a Kickstarter Exclusive, metallic Acting Player badge – a total value of £90 for the price of £70. This box is only available during the Kickstarter campaign, and won’t be released in retail – this is your only chance to get one!”

Irma Dalakanitzkova pointed out this board game and Kickstarter in the comments of another article I did here on the Guild. I wanted to launch a side column that focuses on non-vanity press Kickstarters and this board game felt like an excellent start.

Heroes of the Great War: Limanowa 1914 follows a key, but underreported, World War I battle that could have hastened the outcome of the entire conflict. Like so much of WWI, the battle had the potential to change the world but, instead, of knocking the Central Powers out of the war before 1918, it led to more slaughter, no immediate victory, and stagnation.

As a subject, WWI is the study of carnage and mismanagement of such epic proportions it is morbidly fascinating. Setting a strategy game of this quality (and apparent cost) among a war famous for its trench warfare and general lack of strategic execution is bolder than Lawrence’s attempts to ignite an Arab revolt against the Ottoman Empire. By having Heroes of the Great War focus on a campaign from the Eastern Front, the creators have the opportunity to show a different view of the war with both sides moving and operating at a reasonably effective and lethal ability when engaging each other. The game offers a number of gaming options (versus, solo, cooperative) in a product as professional looking as the British Expeditionary Force at the start of the Great War.

If you’re curious about how the game will be presented and play, there are a number of video examples of what you’ll receive and how it’ll work on your tabletop. The miniatures and map look crisp and offer a view of the level of quality they’re striving for. This game has the potential to remake the perception of WWI as *just* a trench war and shed light on the other major front and the strategy utilized there.

If you’re looking for a board game that allows you to re-create history, check out the Kickstarter for Heroes of the Great War: Limanowa 1914 by Gladiator Games.

Egg Embry wrote comic book short stories, edited comic book series, wrote and drew a webcomic, and contributed to comic book journalism across the 2000s. Now, he buys the opportunity to write for a variety of tabletop role-playing games in the tradition of vanity press. NOTE: Articles may includes affiliate links. As a DriveThruRPG Affiliate/Amazon Associate/Humble Partner I earn from qualifying purchases.
View all posts by Egg Embry →
Tagged  Board Game, Gladiator Games, Heroes of the Great War: Limanowa 1914, Kickstarter, World War I, WWI.
Bookmark the permalink.