On DriveThruRPG, we’re making the RuneQuest Glorantha Bestiary ‘Pay-What-You-Want’ on for the next seven days (to 12 Jan). If you download it, instead of paying us, we encourage you to make a donation to the Australian fire-fighting and recovery effort.

We think Gloranthan beasts are special, but Australian animals are unique and precious – and real. But it is estimated up to half a billion of them have perished so far in the devastating wildfires still raging across the continent. That number is expected to rise dramatically, as vast swathes of habitat have been consumed by flame.

Some places where you can donate – you’ll find the URLs for all these sites on the RuneQuest Glorantha Bestiary product page at DriveThruRPG:

with kind regards and thanks from Chaosium Inc. #weareallus 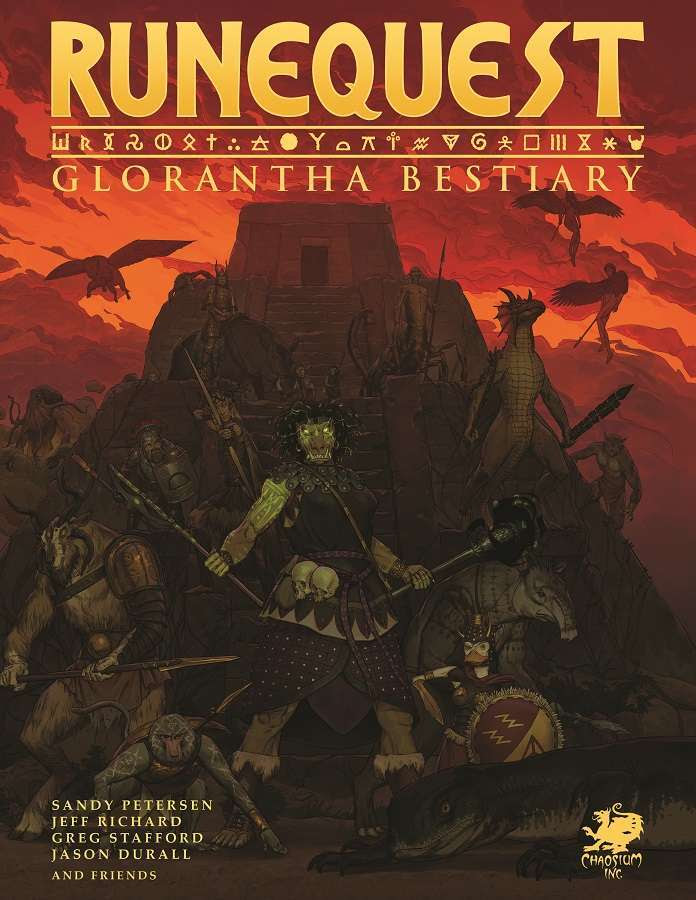 Why am I dead set on buying role-playing game writing credits via Kickstarter? Why build a resume through paying to work for other creators? Why not, you know, self-publish my own RPG content? There are a number of options to sell third-party RPG publications: OpenGamingStore.com, DMsGuild.com, RPGNow.com, DriveThruRPG.com, Kickstarter.com (of course) and more. So why not be my own boss and dive in?

I’ve touched on my major obstacle to doing more, time. I lack it so it makes more sense, for now, to do small parts of larger, collaborative projects.

Another major concern I have is being seen. I want what I write to be read. Would I develop a following out of the stone blue?

Then there’s the one my creditors care about the most – Profitability. Would I make more publishing than I hope to make as a freelancer?

Some of the answers to those questions appear in One Year on DM’s Guild, an entry by Jacob Driscoll on his blog The Wonder Waffles. In the article, he discusses his RPG sales in 2016 on the DMsGuild.com. Well worth a full read.

Without reprinting all of Jacob’s research, here are the *edited* parts of his article that are pertinent to what I do (see his article for a fuller picture):

From the perspective of my vanity press experiment, there are some worthwhile pieces of information to be assumed from this. After buying two of Jacob’s products – People of the Eternal: Races of the Astral Plane and Hereos of the Eternal: Classes of the Astral Plane – and some Googling, Jacob has more experience in freelance RPG creation than I do. Because of his position ahead of me, his results are worth referencing as a roadmap for the road not taken.

For this comparison, the most important difference between Jacob’s path and mine is our methods. I’m hoping to buy writing assignments, do a solid job and move from being a wanna-lancer that pays to write to a freelancer that gets paid to write. Jacob is jumping right into production and profit and contacting RPG fandom without working for a third-party publisher.

That deserves emphasis. He’s making money while I’m spending it. Jacob’s generated profits ($250) equal to what I spent on my first RPG Kickstarter vanity press reward ($250). He’s WAY smarter than me.

That said, I’m experimenting and that’s worth something. Testing a hypothesis has value… right? Right? I mean, what’s, ah, what’s money?

I mean, other than everything… hmm… uh, <sniffle>… back to topic…

Jacob points out that, to-date, his per word pay rate (the normal measure for a RPG freelance writer) is $.003 (3/10ths of a cent) per word. While I have not jumped to paid writing gigs, many RPG publishers advertise freelancer rates of $.01 and $.02 per word and $.03 per word and $.05 per word, between three and sixteen times higher than Jacob’s current take. That said, I believe (and clearly Jacob does as well since this is the direction he’s moving) that he will grow a fanbase over the years and in the long game see more money.

In measuring his first year’s accomplishments, Jacob notes his total units sold in 2016 are 340. While that does not represent 340 individual fans, he’s been seen by a number of fans. In the article, he talks about the pricing methods he’s using to attract customers and get a greater amount of sampling. I am lockstep with him on the need for fans to see your work. It’s part of why I chose to buy onto Kickstarter projects. Because they funded, I know they were successful and that any work I do will get eyes on it. As an example, my short (few hundred words) location seed in Sasquatch Game Studio’s Primeval Thule for 5e was seen by at least 850 RPG fans. No one bought it because of what I wrote they bought it for the genius of what Sasquatch Games created. In that amazing campaign setting, the fans got to see what I added and, I hope, will look favorably on trying my future freelancer work because of it.

If Jacob is bringing in a check and building a fanbase and establishing himself, why don’t I? Why am I not going Jacob’s route?

It’s still time. He’s putting in an estimated 10 hours a week. I have difficulty being certain I’ll have that week after week. But also there’s the exposure. I believe that saying I worked on X projects is more likely to turn heads and generate interest in future works. Then there’s the money. In the near-term, freelancer work has the potential to pay more. In the end, there’s my experiment. I think that there is value in a story. Saying you bought your way into your job, well, that’s a story worth telling.

Thanks to Jacob Driscoll for writing his article and John McGuire for pointing it out to me.