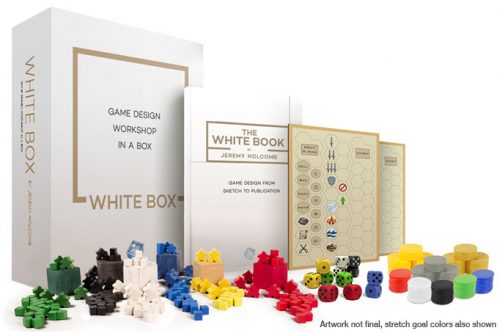 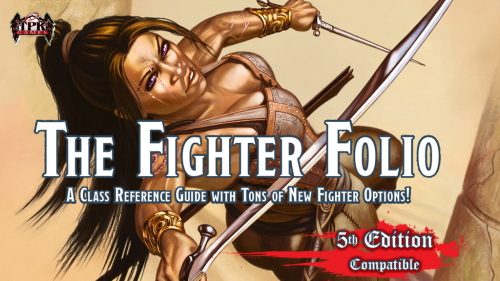 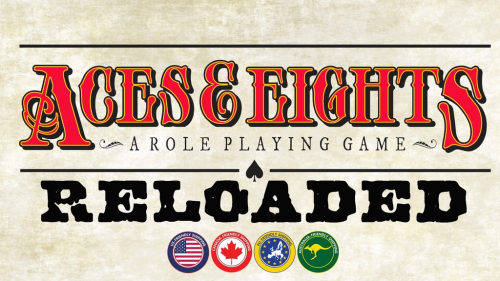 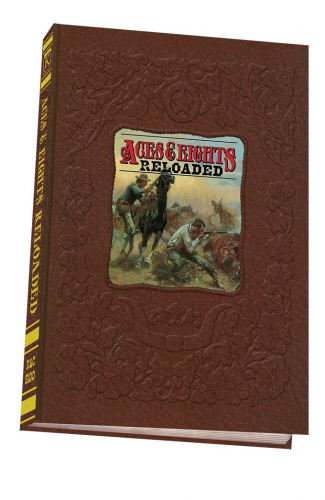 Do you want to create a board game? Have an idea but need the board and pieces to test it out? Looking for design ideas from professionals? This may be the option you didn’t even realize you needed.

“From savvy advice to myriad bits, The White Box has everything you need to start creating the game in your head.

Almost everyone who’s ever played a game has had an idea for how to make it better. To tweak it, improve it, or even build something new from its miniatures, cards, cubes, and concepts.

At Gameplaywright and Atlas Games, we think making games is awesome. We believe it’s one of the most challenging, fun, rewarding things you can do. If you’ve ever thought about making a game of your own, we want to help.

We made The White Box for you.

The White Box is a learning, planning, and prototyping tool for tabletop game designers.

It contains a book of 18 essays on game design and production, covering subjects like where to find a great concept, how to use randomness, what to ask playtesters, and whether it’s wise to self-publish.

It includes an abundance of components to get you started right away, from cubes and meeples to dice, discs, and chits.

Maybe you have a golden idea inside you burning to come out. Maybe you want to tell a story or explore a problem. Do you dream of seeing your name on a box at your local game store? Or perhaps you see game design as a path to fame, fortune, and a satisfying career.

The White Box is for aspiring professionals, creative young people, and literally anyone who’s ever wanted to build their own game without having to plunder their game library for bits.

If you believe creating games is awesome, The White Box is for you.”

Let’s step away from my usual topic – vanity press tabletop RPGs and resume building – and look at a board game. Not a playable board game, but one you’ll create. If you want to construct your own board game, this is going to simplify the process by giving you all of the building blocks.

The White Box offers all the parts you’ll need to design your own game. No need to cut out pieces to play with or get poster board game maps that cannot be folded up or spend time addressing the components needed to play instead of, you know, playtesting your idea. With the White Box, you have the pieces needed to go right into rolling dice for your ideas, all in one box. Add to that, a book loaded with design philosophy and you’re ready to hit the ground running.

Like the Kickstarter says, “[y]ou have a golden game inside of you” and I agree. I have one that’s been in my head for about a year and the White Box will help to bring it into the physical world. For the price – $38 shipped in the US – you can take a chance and design that game that’s been waiting to leap out of your head.

Let me shift the focus from board games back to my usual love, RPGs. In this case, the Kickstarter for TPK Games’ Fifth Edition Fighter Folio & Condition Cards. Through my wanna-lancing, I contributed some fighter subclass ideas for this project and I can’t wait to read the finalized versions. Last week, I did a write up of my involvement here. Take a moment to check out their Kickstarter. This is going to add flavor and challenge enough to your gaming table to live up to the company’s name – Total Party Kill.