Vanity Press: What Kickstarter RPG Rewards Are Available? – Dark Obelisk & A Delve in the Cave

Sometimes (all of the time), wanna-lancing is about gaining the experience needed to become a tabletop RPG freelancer. Other times, it’s about meeting people in the industry. This week, I look at crowdfundings that offer one of each scenario. 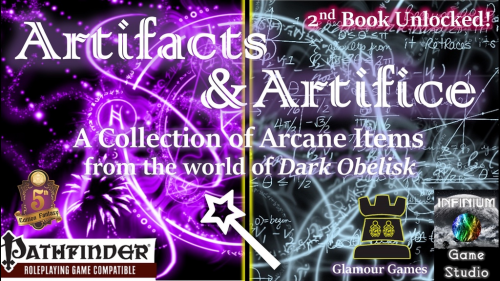 “200+pp color PDF/hardcover with a wealth of magical items, each with quests, backstory, NPCs, and integration with the Dark Obelisk AP.

If you play Pathfinder or 5E/Fifth Edition, this book will be valuable to you.

On the fence? Check out the sample magical item, Abhorrent Naginata, available for free only during this KS campaign. It’s 10 pages of lavishly-detailed goodness, all dedicated to a single, nifty magic weapon. It’s a good example of what to expect… times dozens of items! 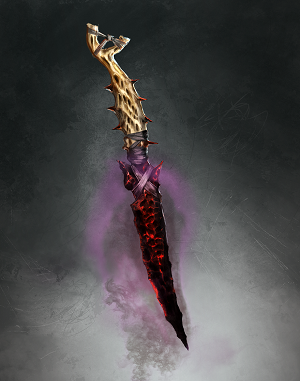 This product is a massive, 200+ page full-color PDF and hardcover roleplaying supplement that will enhance any Pathfinder or 5E campaign in any setting.

Artifacts & Artifice will be a richly detailed hardcover gaming sourcebook, and companion to one of the most ambitious and massive indie RPG adventures in recent memory.”

Infinium Game Studios is offering a free sample of the type of product that they’re developing through this Kickstarter. If you need major items for your campaign along with detailed backstories, related NPCs, and adventures, this has got you covered. Add to it, you can design a NPC related to one of those items or a magic item to appear in one of their two books or you can design both and an adventure. Lots of vanity press options. For these books, they’re a good mix of RPG crunch and wanna-lancing opportunity.

You can find the Kickstarter campaign here. 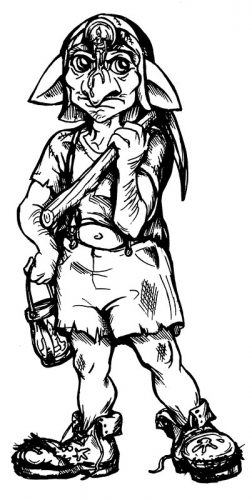 5E Adventure: A Delve in the Cave by Jamie Chambers
IndieGoGo (originally on GoFundMe) campaign ends on Saturday, June 17 2017.

“I accidentally wrote a 5E fantasy RPG adventure! Wanna help me print it? This is a short campaign … it ends on June 11, 2017.”

Jamie Chambers wrote more on his GoFundMe page [UPDATED – This has moved from GoFundMe to IndieGoGo here. The GoFundMe total counts toward the overall total] detailing the experience of/reason for writing this adventure, not so much about the adventure itself. Let’s assume it’s a good dungeon crawl for 5e and it’s worth entertaining a quick inspection of it and its crowdfunding campaign.

For Egg, there’s one additional opportunity here. While looking up Jamie Chambers, it turns out he lives a town or two away from where my humble home. One of the challenges of any type of entertainment freelancing is location. Live too far from where the wider professional community sits and you’re dependent on computer and phone contacts. Face-to-face causes some professionals/editors/publishers to become more invested in you as a person and creator. Human contact and all. 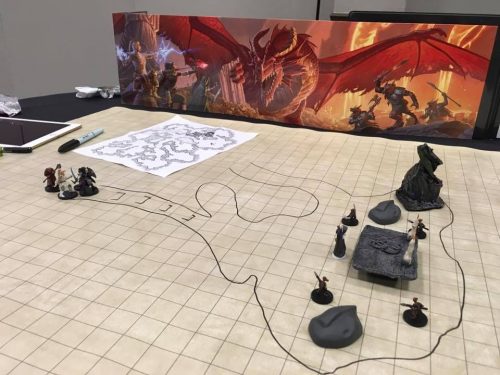 For my end, I live in Georgia, which has taken on a degree of prominence in the TV production world. But, for many other creative endeavors, it’s pretty far from where the action’s at. The potential to meet a local creator to network with is an opportunity to break out my rusty speaking skills instead of typing… Always typing. Will Jamie want to meet me? That’s CLEARLY not part of the crowdfunding campaign so I have no illusions that he’s dying to meet a dude named Egg. Heck, he’s not too far away, he may know some Embry’s and be feeling Hatfield toward McCoy, you know. Still, an interesting possibility of an “extra”. When looking at wanna-lancer opportunities, this is a bonus. The potential to meet someone in the industry outside of a convention is worth looking into.

My Tessera Guild-mate, Robert (Route 3) Jeffrey II, is still running his Kickstarter as is my friend and publisher, Michael (Grond) Phillips. I cannot recommend checking out these Kickstarters enough!