Building a RPG resume? I am. To do that, normally I buy RPG writing assignments via Kickstarter. This week, I’m switching up my plan just a bit. I’m not buying a credit, I’m looking at the chance to create third-party content for a new gaming system.

Which new system? Dusk City Outlaws is just coming out so the market for 3PP content is not saturated or even started. DCO content will stand out because it has no competition for eyeballs. The big fish, the small pond, you get the idea. “A roleplaying game of heists & other thievery by Rodney Thompson. Play as members of 8 criminal cartels in a massive fantasy city.

Dusk City Outlaws is a tabletop roleplaying game inspired by books, TV shows, and movies like The Lies of Locke Lamora, Leverage, and Ocean’s Eleven, where players take on the roles of thieves belonging to the eight cartels that rule the criminal underworld of a massive fantasy city. The players come together to form a crew and take on a job, planning and executing a criminal scheme and earning the respect of their peers.

The game comes as a boxed set, with all the game materials needed for an entire gaming group to start playing. The game is designed to be easy to start playing, even on a moment’s notice. Once all of the players are familiar with the rules, it takes only minutes for one player to read through the scenario while the other players quickly make characters. 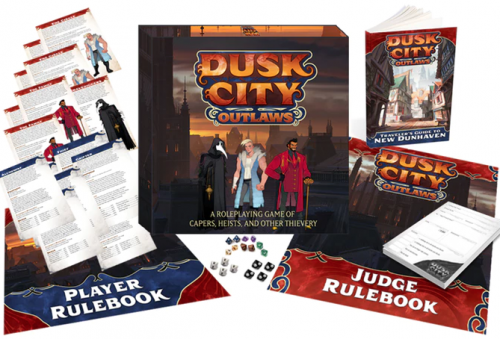 Dusk City Outlaws has a streamlined rules set that uses a sleek narrative dice system and player-empowering special abilities to let the players craft a story about a daring heist or a long con without slowing the game down to consult a rulebook. Everything the players need to know stays on the table in front of them for the duration of the game. For the Judge, the game’s setting is a fantasy city sandbox, and the game provides a resource system that lets the Judge easily react to player actions and providing interesting challenges and plot twists without the need for advanced preparation.

The game hits the table quickly, plays fast, and gives the players the freedom to come up with their own plan and then make it happen! 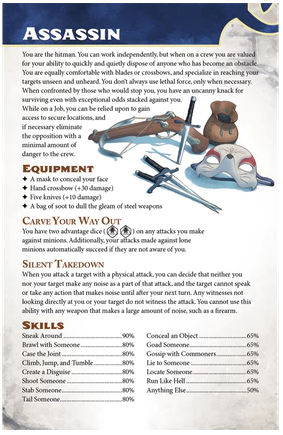 If you’re anything like me, one of the first things you do with a new roleplaying game is start figuring out how to create your own material for it. Got an idea for a scenario that you want to put out there for other people to play? Want to create your own cartels? Add new specialties? Hack the game into a completely different setting or system? This upgrade gives backers access to digital files used in the creation of the Dusk City Outlaws game, making it easier to produce new material that looks just like the contents of the boxed set.

I want you to take this game and make it your own, make your own content for it, share it with others in the community, hack it, and get as much out of it as you can. This pack should help you do so, and help make the material you create look as close to the original game as possible.

All backers can add this upgrade to their rewards by increasing their pledges by $25.” 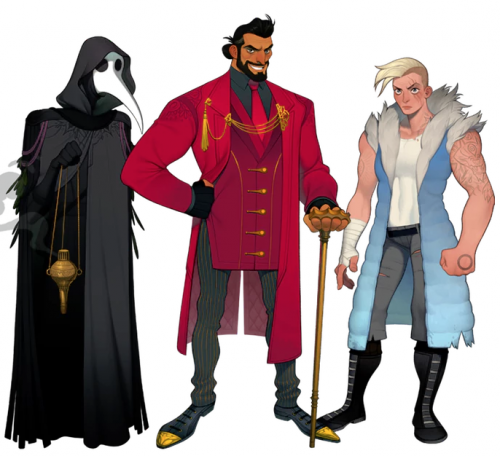 This is a variation of what I normally write about. My goal is usually a printed credit in a book. This, on the other hand, is the opportunity to create original content and does not guarantee a credit unless you create a product.

Because my quest is printed credits, I might have bypassed this if the minimum cost was not so reasonable, $45 ($20 for a PDF copy of the game’s many parts plus $25 for the license to create and distribute free content along with art and templates). Skipping this would be a mistake. Because this is a new product, there’s an excellent chance that any 3PP work produced will be seen by the creators – Rodney Thompson, John Rogers, Saladin Ahmed, Susan Morris, Steve Kenson, Mike Krahulik, and Jerry Holkins.

It’s a risk compared to many projects I’ve joined. This is no lock that my name will appear in the book unless I produce. This only pays off if my free content, whatever it may be, is well-received by other industry professionals and fans. That said, if it succeeds, under the smaller pond scenario, the potential for it to lead to contacts is better than many. If I can steal their attention, then this plan will pay off.