Want to expand your tabletop RPG writing and resume? In the process of broadening your horizons, do you want to create an alien superhero near-god? Want to make a monster with a wicked twist and have it drawn? Then these role-playing game Kickstarters offer just the opportunities for you. 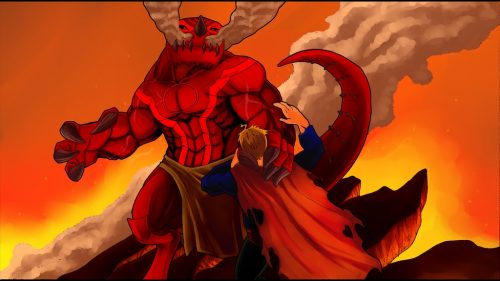 “A Superpower Tabletop Pen and Paper game with heavy mytho-scifi overtones. Prove your worth, become a God!

What is Opilan: Destiny Rising?

Intended to be a superhero pen and paper roleplaying game, this original idea has been taken to a new level, involving 12 distinct races (including humanity), a pantheon of 11 gods, and a galactic setting of intrigue and lore. The game is highly variable for Narrators (GMs) who want to have truly unique campaigns that cross genres and levels of technology in their campaigns. Mythos, Sci-Fi, Fantasy, and Superhero are all fair game in ODR. We wanted to make the game that we wanted to play and so we drew inspiration from our favorite games, movies, comics, myths, and stories into this original concept. Chances are if you want to make a character parallel to your favorite character from any media, you have that option. With an engaging system that grows in complexity as characters do, the pace of play and breadth of your adventure comes down to what kind of experience you want to gain.

Find out more at deadlydemongames.com

The game utilizes a complete D6 (six sided die) system and builds in complexity at higher levels for characters in a natural progression which won’t bog down beginners. Central to the entire game are the Methods and Powers which make up the Origins of characters who are not limited to perusing only one avenue to true greatness. In order for players to feel like a superhero, and to further the sense of growing power, damage has a multiplier, specific to a character’s prowess. To accelerate character progression and further engage players, we added a means of gaining experience for each action performed without bloating the system. Incorporated into the system are rule-sets which can adjust the standard rules. These can be taken whole, or piecemeal, allowing a Narrator to tailor the game to their specific group of players.

The setting appears to mix religion and powers and sci-fi to create a universe of options. The gods provide some powers while technology provides others. The odd race out are the humans… What is this species origin? Evolution or divine creation or something else?

With Opilan: Destiny Rising, you get to work within a brand new role-playing game system and create a NPC or monster from a literal universe of options. It’s the ground floor of a new creative endeavor and the chance to go wild with a character/creature that does not have to be from the “logic” of our world, this is a winner! The possibilities make this a system worth checking out. 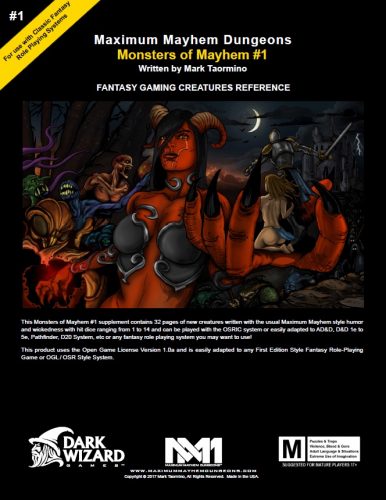 Are you a DM looking for something offbeat and different than the usual monster supplements? Do you like our Maximum Mayhem classic old school dungeon modules with outrageous villains, over the top monsters and wicked encounters? Do you want some cinematic, fun, memorable, challenging monsters to coldly and callously toss at your players to crush and destroy them in awesome and humiliating ways?

If you answered “HELL YES!” to those questions then Maximum Mayhem Dungeons: Monsters of Mayhem #1 is the supplement for your campaign and adventures!

MONSTERS OF MAYHEM #1 is 32+ page SOFTCOVER PRINT BOOK or PDF ONLY BOOK of new monsters with stats, descriptions and lots of cool original artwork! This supplement contains dozens of new creatures written with the usual Maximum Mayhem style humor and wickedness with hit dice ranging from 1 to 14. These all can be played with the OSRIC system or easily adapted to AD&D, D&D 1e to 5e, Pathfinder, D20 System, etc or any fantasy role playing system you may want to use! 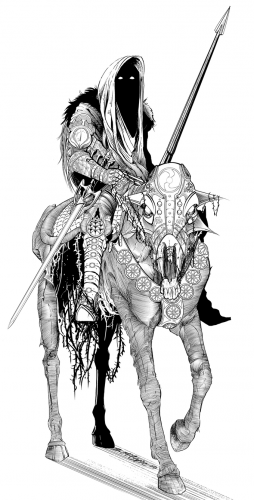 MAKE A MONSTER AND GIVE ME IT ALL!

You get to create a monster in the supplement! (pending Dark Wizard Games overall edits and approval) You will get the PDF file of our Maximum Mayhem Dungeons: Monsters of Mayhem #1 book and ALL FOUR of our previous Maximum Mayhem Dungeon PDF modules: Hanging Coffins of the Vampire Queen, Secret Machines of the Star Spawn, Villains of the Undercity and Vault of the Dwarven King! Each PDF module will also include the PDF rewards associated with the respective module as well! You will also get a poster size 24″ x 36″ PDF file of the front cover of the supplement and our PDF of SIX different classic player character sheet designs!

Their tiers above this also include monster creation.”

Want to design a monster? Something twisted and worthy of the gaming table? Believe in yourself because you know you have one (or a dozen) of them in you… Hmm, that might be a real concern… Sorry… I shouldn’t judge your inner-internet-troll… Nevertheless, this is the opportunity to share it with the world! Design an in-depth monster and let the world see it!

ART! This Kickstarter is not shy about sharing their art and it ranges from cartoony to serious pen and ink. That’s a good choice on their part because this campaign stands out for its beautiful artwork that recalls superhero comic books and Frank Frazetta’s pencils and inks. It gives the products a unique, sharp look. 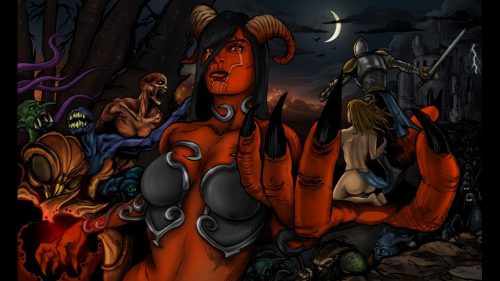 Because of their art, the sweet spot for this Kickstarter is the $125 pledge level – get the book, PDFs, design a monster, and they’ll draw it! As stellar as their art is, it’d be worth the extra money to see your monster fully visualized. Of course, that means you need to step up the visuals of your monster. No gelatinous cubes will work here. This needs to be a monster that is as visually scary as it is psychologically engaging at the gaming table and something that an artist will enjoy bringing to life.