3 RPG & 1 Comic Kickstarter You Need To Back – Torg Eternity, The Lost Citadel, Triten, and Angelica Reigns

Need a genre-crossing tabletop RPG system and setting? Want to read supernatural fantasy? Interested in a wanna-lancer opportunity or concrete steps to expand gaming? I’m counting down four Kickstarter projects that range from fantasy zombie apocalypse to samurai on motorcycles and all of them look awesome! 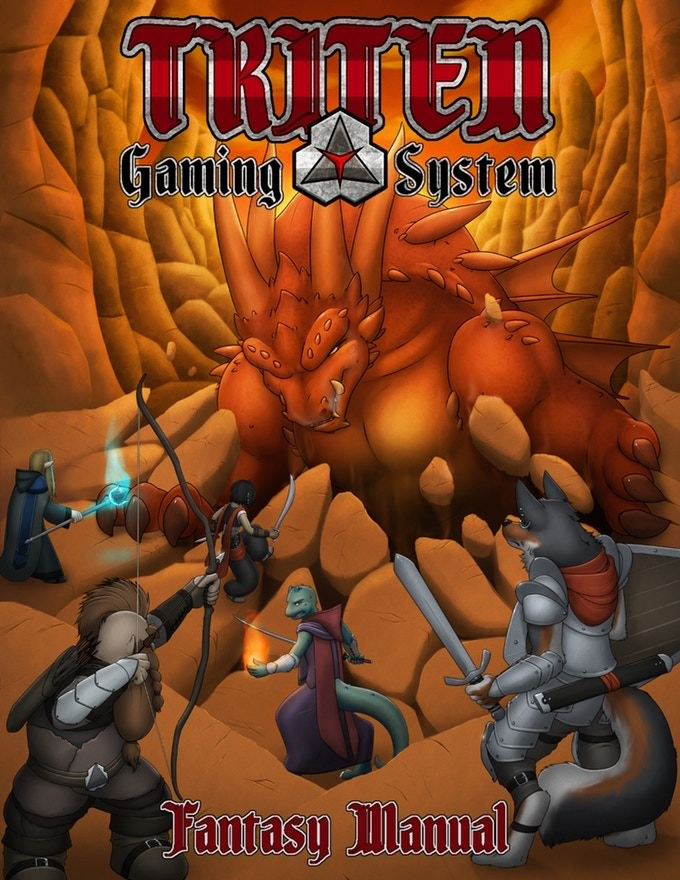 “The Triten Gaming System is a fun and innovative new framework for tabletop Pen & Paper RPG’s designed to be simple and robust.

The Triten Gaming System is a whole new system of Pen & Paper RPG mechanics designed from the ground up to be both straightforward and robust, allowing for a relatively simple set of rules to work for an extremely diverse set of circumstances.  The Fantasy Manual is the first version of the Triten Gaming System which is focused on medieval fantasy.  Along with the manual, all you and your friends need are some polyhedral dice, pencils, paper, and your imagination!

Triten uses a skill-based structure instead of a level-based structure of character advancement.  Individual experience points earned as a character progresses through the world can be directly applied to any of dozens of different broadly-used Skills and additional specific, individual abilities called Talents.  Characters can also craft or purchase a wide variety of equipment and learn hundreds of different spells over 7 unique schools of magic.

This system has been in development for many years and has been though numerous playtesting campaigns with a diverse group of experienced Pen & Paper gamers who have dedicated countless hours to making this the best system it could possibly be.  The manual is now complete and is in the final stages of editing, layout, and illustrations!  We are confident that new and experienced Pen & Paper gamers alike will love this system as much as all of our playtesters have.  We just need your help to bring Triten to market!”

Let’s start with this – David Prizio, creator of the Triten gaming system, is a nice individual. I was not aware of Triten until I met David through #rpgnet. We discussed my wanna-lancer experiment and he shared his Kickstarter that happens to have some vanity press options with it. For the wanna-lancers of the world, this campaign offers the chance to create a NPC using their proprietary system and have a custom illustration done. Immortalize your character at the ground floor of a new RPG. A lot of opportunity with this. But what is the Kickstarter for? Triten is a single system that will span a variety of settings. For the opening, they’re offering a fantasy setting. I recommend checking it out if for not other reason than David is a good guy.

You can find the campaign here – Triten Gaming System 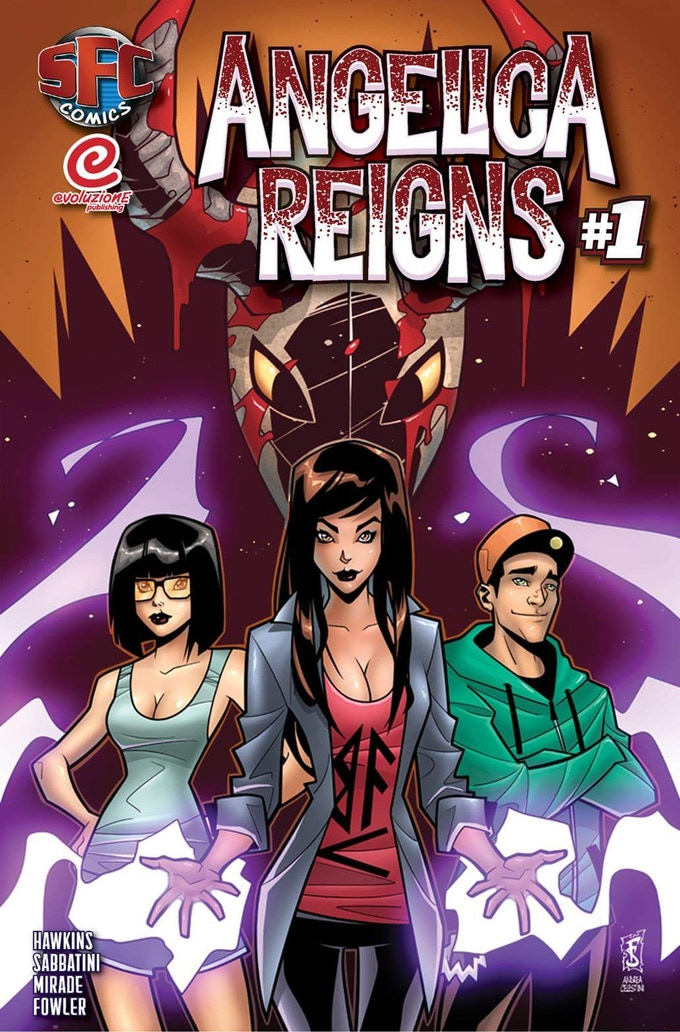 “Angelica Reigns: The Faith is a 22 page, full color action comic about a young woman being hunted by an ancient religious cult.

What are you Kickstarting?

Angelica Reigns is the first solo series of the SFC Comics line. SFC is world of super powered sports entertainment. These solo series are a chance to get to know the characters outside of the ring.

The Story: Angelica is trying to establish a life outside of the shadow of her mother’s cult and Qakare’s power. She’s a young woman in a new city making new connections. All of that is put on hold when she becomes prey to a secret society called, The Faith. They are a faceless, timeless, and secret organization with roots that go back to the crusades. Their mission is to bring purity back to this world. They have ways to track and monitor dark magic.”

Let’s do another guy post – Marcel Dupree is one of the most pleasant people in comics, and the writer of Angelica Reigns. If you float around enough Kickstarters, you’ll find some incredibly likeable people. Marcel is near the top of my list. He pinged me on Facebook one day to see if I’d look at his Delilah Blast #1 Kickstarter. I did and it sold itself. Since then, we talk here and there and I follow his comic wisdom and crowd participation insights. If you are interested in knowing how the sausage of indie comics is made, I’d suggest following Marcel on Facebook.

I could talk about Angelica Reigns but Tessera Guild-mate John McGuire already has here. Let me quote him:

“This one has the feel of maybe a Buffy style of story for Angelica. A young girl, fighting against supernatural forces bigger than herself, and, from the looks of it, has a couple of friends to help her on her travels. Consider me intrigued by the overall idea.

In addition, the work Federico Sabbatini is doing on the various images they’ve shown on the Kickstarter page are very nice, almost as if someone took a series of animated cells from a tv show or movie and put them on the page.”

You can find the campaign here – Angelica Reigns #1

Torg Eternity is a table-top roleplaying game based on the original 1990 version of Torg created by West End Games. It has been re-imagined and updated for the Near Now.

The “High Lords” came from other cosms—other realities—conquerors joined together to steal the Earth’s living energy…to consume its very Possibilities!

Each Reality Raider brought his or her own reality, or “cosm”…

…from the dark fantasy of Aysle…

…to the technological oppression of the Cyberpapacy…

…the savagery and exploration of the Living Land…

…the diabolical pulp villains of the Nile Empire…

…the Gothic horror of Orrorsh…

…the action and intrigue of Pan-Pacifica…

The High Lords impose their reality and transform everything within, draining the Earth of its Possibilities in the hopes that one of them will become an ancient and all-powerful being called the “Torg!””

While this RPG does not include any wanna-lancer/vanity press rewards, it doesn’t have to, it’s Torg! A branching from the original Torg RPG (1990s), this Kickstarter is a re-launch/expansion with revised mechanics, yet they do not invalidate the previous meta-story of Torg 1e. Not only do they have 2e available, this campaign includes everything that was ever published for Torg 1e.

I picked up the Free RPG Day Torg Eternity quickstart. It’s a variation on the upcoming Torg 2e rules. Made without using any cards (they play a large role in the standard game), this version of the rules still gives a feel of how much potential this game has. It’s an interesting concept combining genres into a single world. If you’re looking for an in-depth view of this, I attended an online Q&A with Darrell Hayhurst about Torg Eternity and Dan Davenport has the questions and answers on his blog. Read about the game from Torg Eternity game designer, Darrell Hayhurst.

By the by, Dan Davenport is as nice a person as you’ll meet. Darrell Hayhurst was extremely pleasant during the Q&A.

You can find the campaign here – Torg Eternity

“Fifth Edition roleplaying in a world ravaged by death and undeath.

The city is called Redoubt.

And as far as anyone knows, it is the last.

Seven decades ago, there were cities upon cities.

Kingdoms and nations; the remains of ancient empire. Cultures at war and cultures at trade. Humans, dwarves, elves, and others. Magic and monsters, rare but real. And so it was for millennia, through two dynamic ages the lorekeepers and scribes called Ascensions.

Until the world ended.

Most call it the Fall, but whatever term a given people choose to use, it marked the time when everything changed.

When Green Ronin Publishing first discussed this product, it was in conjunction with an opportunity for women to freelance on The Lost Citadel. They didn’t talk so much about the product as what they wanted it to offer, greater diversity. I was excited about the possibility. More female representation in  everything benefits us all. More gamers, more GMs, more stores, more designers, more publishers, more ideas. For me, this contest is the chance to expand the industry in a real way. Green Ronin is embracing a huge swath of humanity and gaming as a whole will benefit from it. To see Green Ronin, a major 3PP (third party publisher), do this is inspiring. And I want to say congratulations to the winners: Kate Baker and Anna Landin. [EGG’S NOTE – I wish I could continue the “nice person” theme of this article but I have never spoken with K. Baker or A. Landin. That said, I’m sure they’re outstanding people. They’re certainly keeping good company.]

Beyond that freelancer opportunity, this is a 5e setting/expansion. It seems like it will be a moody combination of The Walking Dead meets Attack on Titan. Last fantasy city in a zombie apocalypse. Tragic, hopeless, dark fantasy. This Kickstarter does an excellent job of conveying the feel of the product they’re creating. I am looking forward to reading this setting and the adventure that Kate Baker and Anna Landin are designing. And I hope to see more opportunities to expand the industry coming from all quarters. 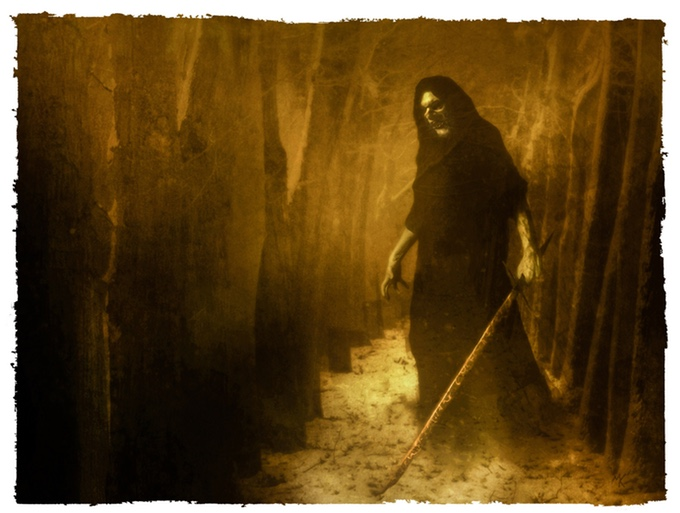 The Lost Citadel – Amarset, God of the Dead