3 RPG Kickstarters You Should Back – Overlight, Black Void, and Shattered Tower

In this week’s list, the three RPG Kickstarters I spotlight are a tour de force of art! These three have inspiring images that key in on the feel of the worlds and their mechanics. Each Kickstarter is an original system, each one a fantasy setting, and each one as beautifully rendered as one could desire, read on to see.

“A dark fantasy tabletop roleplaying game about the fall and resurgence of humanity.

In the days when Babylon was the greatest city on Earth, mankind lived in placid ignorance of the grandeur, vastness and horror of the cosmos. Following cataclysmic events on Earth the fragile veil between reality and the Void was shattered and the truth of existence revealed. As mankind cried for salvation they were torn from their homeworld by Void-torrents and the surviving peoples of Earth were scattered among the stars. Countless were lost and mankind seemed all but perished. Over the decades the survivors, stragglers and ragged remnants of mankind’s tribes struggled for their lives across countless uncaring worlds. However, a few managed to go beyond mere subsistence and travel the Void-currents to congregate in fabled Llyhn, epicentre of the cosmos.

BLACK VOID is a dark fantasy tabletop roleplaying game revolving around the fall and subsequent resurgence of humanity after cataclysmic events have torn them from Earth. Pursuing power, prestige and enlightenment – humanity is struggling to find a new place and purpose in a vast and unfamiliar cosmos. Players can focus on the personal struggles and stories of their characters or expand their scope putting emphasis on the fate of humanity as a species and the part they play in this.

BLACK VOID core book: A high-quality, 400+ page, full colour and hardcover book with everything you need for players and game-masters. The book is filled with original art, novel species and monsters, extensive descriptions and rich lore, detailed maps and much more bringing the BLACK VOID to life.

Game themes: The game takes place in a distant past which is both familiar and outlandish in its dark and exotic ambience. As descendants of the survivors of Earth, characters can adopt many roles such as:

Game Concept: At its core the game is about the exploration, struggle for survival and will-to-power of humanity as it encounters an outlandish, bizarre cosmos. This is not a typical game of “good versus evil”. Rather, it takes a less rigid approach and probes the grey areas where morals are point-of-view. The game revolves around three main concepts:

Into the unknown – How does humanity fit into a cosmos it knows little about and where the possibilities are endless? In a cosmos where humanity’s ideals and tenets are insignificant mankind needs to adapt or succumb!

Beyond the horizon – Exploring the cosmos and faced with adversity, political intrigue and cultural tension on a scale unknown to humanity, players must cope or risk becoming collateral damage in the struggles of uncaring factions. In the end humanity must claim its place in the cosmos or perish trying!

What is humanity – Humanity is exposed to strange and oftentimes bizarre philosophies and ideals. As a result the characters must define, establish and decide what humanity is and what its place will be in the cosmos!”

Dark and dangerous! A beautiful artistic contrast to Overlight (below). For the game concept, it’s a fantasy past where you’re an explorer in a deadly world. There are, perhaps, cosmetic similarities to Shattered Tower RPG (also on this list), but the theme feels darker and the world feels less safe. Should you dig in? You can get the quickstart BETA – “But don’t just take our and others’ word for it – go HERE to download the sample BETA-quickstart for free and judge for yourself. – Chris, Black Void Games”

“Mythpunk RPG set in an hostile world, built on the ashes of an older and forgotten one, focused on survival and exploration.

We’re extremely proud to get in the ring with Shattered Tower, our brand new project: we’re talking about a Myth Punk RPG, straightly focused on discovery, survival and exploration.

That could sound same ole same ole, but – trust me – with this concept, this idea, this game… we wanna bring REAL ADVENTURE to the table.
Of course there is adventure in every big RPG we know, love and been playing to, but we decided to take the thrill to the next level.

HOW? well, let’s just say that, if dying while looking for artifacts can be common, here you can fall through the cold claws of death even just while taking a walk outside the city limits!

Of course, at the very same time, your characters will be fully and colorfully equipped with every item and/or ability and/or extraordinary talent necessary to survive… if only you can figure out how to do it! ; )

[Note: All the material will be produced in 2 languages: English & Italian]

Shattered Tower will be a brand new rulebook containing a completely original background setting, the rules you need to go plug’n’play with our peculiar D6system, 3 Adventure modules and much more (following).

If funded, we will produce the Hardcover book consisting of  200+ pages (depending on the stretch goals reached) including:

The spark that led us to create Shattered Tower, came straight out our personal passion for exploration and adventure (a passion we found out being pretty common between RPG players) and from the strong desire to produce not only something new and original, but something that could be a lil’ bit different from what’s out on the market today.
We really wanted to create a something where discovery, hard survival and world exploration are at the core of the whole game.

But there’s of course more than that..

The Setting:
Tyntyr is a vast and extremely hostile world that has risen from the ashes of a war between the world itself and an ancient and advanced civilization, fallen into ruin, shattered and partially forgotten.

Players will travel through an environment heavily dominated by nature, ruled by the Dra-Idjias, mystical and powerful creatures that imprisoned, and now control and govern the offspring of that ancient colonizers that survived the war centuries ago and still lives on the planet.

Players will be part of the Vanguard, a guild composed by the few people of their respective races able to bypass the tight control of the world’s sentinels and visiting the world outside, with the purpose of discovering what once was..  and what still can be…

The player’s job is to incarnate explorers and adventurers, to get in the shoes of pioneersfinding a home in the Vanguard, willing to risk their lives, far from civilization, fighting to death just to earn the respect of the companions and to bring knowledge to mankind.

The System:
Shattered Tower works on the peculiar D6System we created.

How does it work – we’ve got a classic but versatile list of skills (which also includes COMBAT as an ability, for example) and we put it together with the kind of mechanics that you can nowadays find in modern narrative RPGs, creating  a unique system which feels very functional to the setting.

Long story short, every character’s got his skills set with ability scores (from 1 to 6) determined by the construction of the player character (PC) build.
Those points define the number of dices the player’s gotta roll when trying an ability check. success is gained when dices give only 5 or 6.
The few basics of this system also include that the difficulty coefficient of the test that is faced – when higher than the score of the PC – determines the deprivation of X dice to pull, where X stands for each point by which the difficulty exceeds the score of the PC.”

Artistically (and end-date-wise) this project falls perfectly between Black Void and Overlight. The Shattered Tower RPG has beautifully, grounded artwork that lends itself to a mixture of beauty and struggle. What’s the feel? You’re an explorer in an once great now fallen, violent world. There are things to learn (what came before) and things to decide (how will the world progress) and things to survive. As with each of these projects, if the art is any indication of the product, this is a winner.

“Seven continents hang in the sky, stacked vertically far above an unending sparkling sea. Shining down upon it all is the Overlight.

Since the beginning of time, a race of serpentine, celestial beings have been the caretakers and observers of the cosmos. At some point in Earth’s past, probably around 1,000 B.C.E., a small contingent of these celestials argued that humanity was ready to learn the secrets behind the making of the world. That the Homo sapiens species had achieved such a level of cultural growth and spiritual awareness that they deserved to be shown all the wonders of the universe, to be given the literal Keys of Creation.

This small group of celestials was overruled by the will of the majority. Humankind was not yet ready. Defying this judgment, one individual fled to Earth with the Keys, and gifted them to humanity with one warning, “Do not use the Black Key”. Humanity did not listen.

All of reality was turned inside out. The burning heart of the world was now the bright white, unending sky, and the unknowable depths of space now a vast star-filled sea beneath. Entire continents float in the space between, without a moon or sun to guide them.”

Light and brilliant! A shining visual contrast to the Black Void (above). The idea of floating lands that getting to and from is used throughout fantasy and sci-fi for good reason – it’s visually imaginative. Is this the one for you? I could offer thoughts but they have a sample you can get via email here that will answer a lot of your asks. 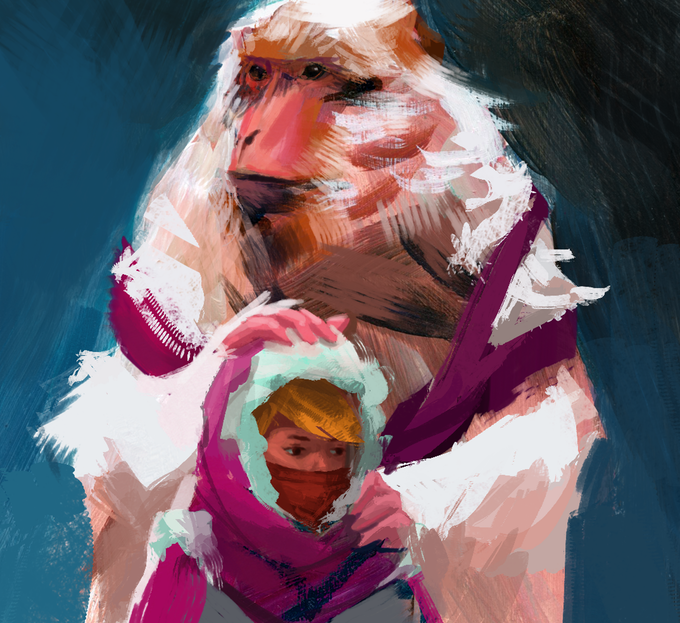